Booth Babes, Stan Lee and Some Art: Comicpalooza 2014 is Here! 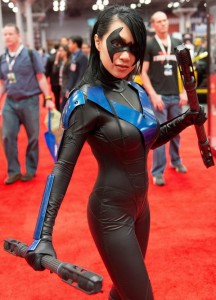 Watch out Houston, here comes Comicpalooza! Not to be confused with the homegrown Austin or Dallas versions of Comic-Con (and certainly not with the original, mega-convention in San Diego), these events serve as more than an opportunity for Stan Lee to rack up frequent flier miles: they’re an outlet for comic-obsessed geniuses to get together, compare costumes, and talk very, very inside baseball. (Yes, there’s a special section this weekend dedicated to Minecraft play, and Nichelle Nichols, a.k.a. the original Lt. Uhura of Star Trek, will be in attendance.)

For the subgenre of thirtysomething male artists whose work is heavily influenced by the comic genre, it’s also an opportunity to watch the art world and comic world collide (or more accurately, to watch the art world be absorbed by the comic world in the way that a tiny gnat drowns in a bucket of honey). As part of their current show of Trenton Doyle Hancock’s drawings, the CAMH has organized a talk between him and legendary comic theorist Scott McCloud on Saturday, May 24, at noon at the George R. Brown Convention Center. Tickets are $30 online and $35 at the door. In between getting autographs from the cast of Agents of S.H.I.E.L.D. and checking out the (hopefully skimpy) costumes of attendees, you can hear about art!