by Lucia Simek May 18, 2014
FacebookTwitterEmail 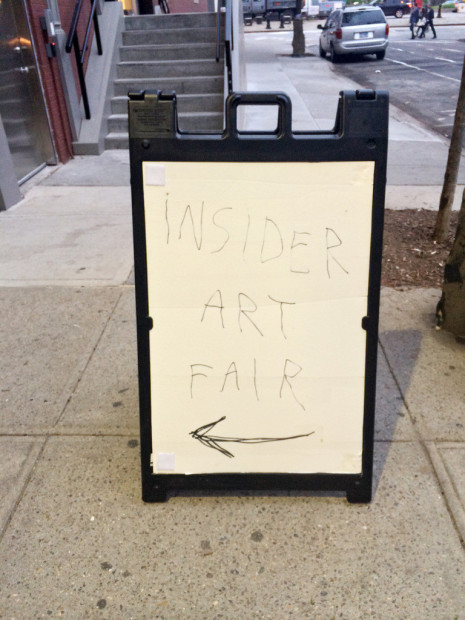 As we reported a couple weeks ago, Houston artist Mark Flood has founded an art fair, the Insider Art Fair, which is part real-life critique of the art fair model and part joke on the art world in total. It’s happening right now in the space above Zach Feuer Gallery in NY, site of the just-ended Outsider Art Fair.

Like all of Flood’s work, extracting serious critique from knavish skewering in the Insider Art Fair is largely impossible (or are they the same thing?), since all of it is totally sanctioned by the art market and absolutely no one is offended  in the least by the artist’s antics, as these various reports from the fair will attest.

“Of course the show is inherently ironic and even hypocritical as Flood is a well-established artist whose work sells for hundreds of thousands of dollars on the international market to well-heeled collectors, but the phenomenon of a well-placed artist directly assaulting his own industry and indulging in high-level self-mockery at the height of his own success always makes for an irresistible spectacle.” –Supertouch

“Flood’s political and consumerist geared work draws attention to the subjects that these art fairs always try to ignore, but without the nagging voice; just enough of an ironic twinge so it’s easy to stay engaged. Drones, nostalgia, capitalism and the Internet all get their dis and we remember just how good it feels to collectively hate things together.”  –Wild“These are the aged paintings,” the Houston-born art star revealed during our illuminating walkthrough, gesturing toward cracked, yellowed paintings that possess all the allure of centuries-old relics but are, in fact, brand new! –Artsy

Like at any fair, there are halls of booths, except these are veiled with tattered black trash bag curtains; a peak behind them reveals mattresses and pillows on the floor. “It combines an art fair with a brothel,” says Flood. “Because both have tiny rooms… I’m not sure if this is saying all artists are prostitutes.” –Interview Magazine