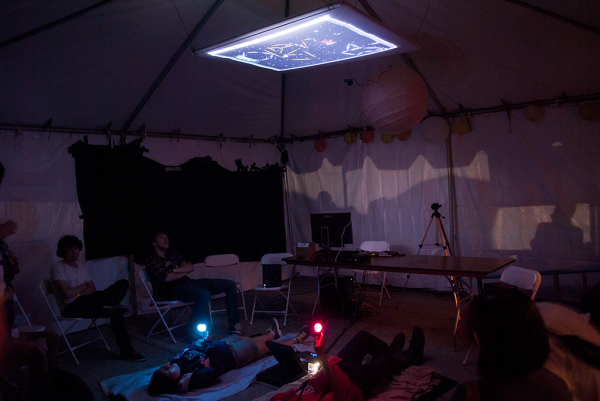 When you live in a big city it seems like more planes, with their blinking red lights, cross the sky at night than stars. City lights drown out space lights, and the constellations— Orion, Hercules, Pegasus—can feel just as mythical as the actual myths they are named from.

Playing with this idea of the unseen movement of the stars in urban places, as well as speaking to a general sense of being out-of-touch with nature, a team of graduate students from the University of Texas at Dallas have made a thing called the Constellation Game that allows for a facsimile experience of star-gazing.  For it, viewers can lie on the backs and draw their own constellations on the projected night sky, spinning their own yarns about the shapes they make and what they mean.

“We are big fans of games that fit in the play space between arcade, art gallery, and museum exhibition pieces, and we wanted to create something in that same space,” the lead programmer of the game, Spencer Evans, told the Dallas Museum of Art’s blog Uncrated. “We are also very passionate about storytelling and mythology, and we wanted to revive that act of storytelling around shapes perceived in the stars, which seems a bit lost and forgotten today.”

The crew of myth-loving techies will have their Constellation Game set up outside the DMA on Ross Ave. tonight as part of the Museum’s Late Nights, so all the celestially-starved masses can use technology to make up for the loss of contact with nature. The irony escape no one, but what the hell—we’ll take the stars, and stories, whatever we can get them.