by Lucia Simek May 13, 2014
FacebookTwitterEmail 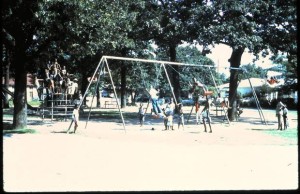 In an effort to memorialize the fading history of some of Dallas’ most blighted and significant neighborhoods, the Boone Family Foundation and the Rainwater Charitable Foundation are teaming up to present a gift of commemorative plaques to the City of Dallas. Taking cues from two very successful public, socially-engaged art projects, Cynthia Mulcahy’s 1700 Seeds , and lauren woods’ A Dallas Drinking Fountain Project, the foundations have asked these artists, as well as Dr. LaTrese Adkins of the Freedman’s Cemetery, to research and produce content for the plaques, as well as public programs and a website. The plagues will be permanently installed in the green spaces of African-American communities that were originally designated as “Negro Parks” during segregation, helping to acknowledge the layered histories of each of the sites.

For the project, Adkins, Mulchahy, and woods will be gathering the oral histories, photos and ephemera of the Negro Parks era from residents of the neighborhoods or from family members, and have sent out an open call for any such documentation.

“We are striving to produce a project that examines the complex ways that Black citizens responded to social inequity—how in the face of shameful oppression they fortified community in order to create safe-spaces for their children to thrive,” says the research team. “This project recognizes the importance of broadening our collective perspective of the historical civic life of the Dallas African-American community in order to yield helpful lessons for the city in the present moment.”