San Antonio Gallery to Pop Up in Mexico City

by Lucia Simek May 12, 2014
FacebookTwitterEmail 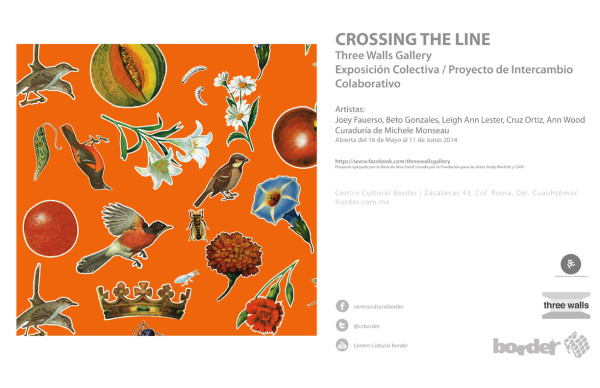 Part two of Crossing the Line, an exchange project between Three Walls (San Antonio) and Centro Cultural Border (Mexico City) is slated to open in Mexico City this week on May 15. The project is a collaboration between San Antonio-based artist and gallery owner Michele Monseau and Mexico City-based curator Barbara Perea, the first iteration of which took place in San Antonio in March as part of Contemporary Art Month (CAM), an annual exchange between San Antonio artists and artists from another city.

The curatorial collaboration between Monseau and Perea was born of the displacement of Monseau’s Gallery, Three Walls, from the Blue Star Complex in 2012 due to rent hikes as the center redeveloped into more of an upscale shopping center, forcing many of the long-time art galleries and theater company tenants out; after she vacated her space at the Blue Star Complex, Monseau committed to making the gallery a roving pop-up entity.

Crossing the Line in Mexico City will feature the work of five San Antonio artists: Joey Fauerso, Beto Gonzales, Cruz Ortiz, Ann Wood and Leigh Anne Lester, whose gallery Cactus Bra was also one of the spaces that vacated the Blue Star Complex last summer. Together, the American artists will take up the themes of the Crossing the Line exchange, using the metaphor of border-crossing as way of framing a larger conversation about “how nature and culture cross-pollinate to ensure survival and evolution, and the positive and negative repercussions of the human race tinkering with and combining natural systems through genetic modification.” Works in the show will consider natural and cultural mash-ups, as well as an emphasis on language. Artists will “contaminate” and “hybridize” the Border gallery and “invade” the outdoor urban space surrounding Border through a performance/social sculpture, says Monseau.