by Lucia Simek May 6, 2014
FacebookTwitterEmail

The biggest art competition in the world has opened its registration for applicants–ArtPrize is back for its sixth year!

Based in Grand Rapids, Michigan, the annual competition brings art, good and bad, from all over the world for a 19-day, city-wide exhibition. It bills itself as a “radically open” contest, which means it doesn’t give a Mid-Western toot for the world’s art world problems or systems. It also means that voting for the competition is done by the public–actual votes, cast and counted, by regular folks. But, contrary to the egalitarian nature of the whole event, big money is actually on the line–$200,000 to the top winner and cash prizes in the $20,000 range to many more artists.

And, for those that like the good old fashioned Art-World-Way of doing things, there are also (thank goodness?) juried awards! Last year’s jurors included Mel Chin, Manon Slome, and Anne Pasternak–not too shabby, eh? So if you are worried you might not win because your work does not include bears, landscapes or bronze, fear not! Art snobs will be in attendance too, so don’t feel left out. BUT, if you do win the juried award you only get $100K, which is kind of like a consolation prize for being so boringly Art World, so its probably a better idea to just compromise your high principles and make a bear in a landscape out of bronze. It’d be ironic, so at least you could rationalize your selling out.

For ArtPrize, individual artists may enter, as well as groups, collectives and curators. And there are, maybe, 50,000 rules for entering this thing, so do our due diligence and read them. Then, get scheming on how you can convince the masses that you’re worth it (or jurors that you’re half worth it).

CORRECTION: As of this year, ArtPrize is actually doling out TWO $200,000 prizes, one chosen by the public and one chosen by jurors. “We believe these changes to the ArtPrize structure have the potential to transform the dynamic of the event by further exploring the tension between public and expert opinion,” says the ArtPrize team. 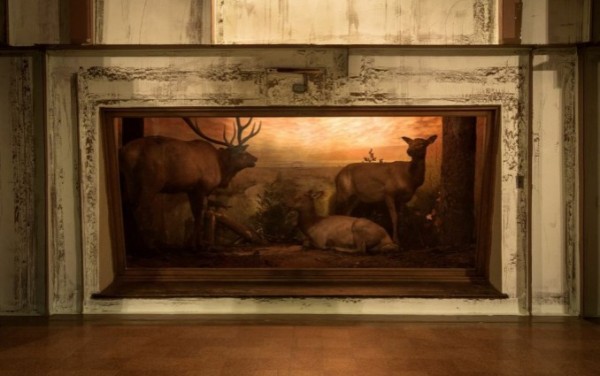 Carlos Bunga’s installation “Ecosystem” won the 2013 Juried Prize. It had the perfect balance of wildlife and conceptual rigor.