by Loreta Kovacic May 4, 2014
FacebookTwitterEmail 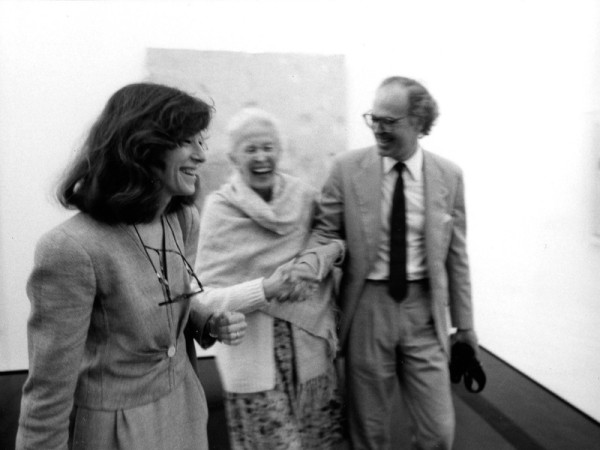 Mrs. De Menil (center) at the 1987 opening of the Menil Collection, Houston

All three times I met her are memorable, but the last one really strikes an outward chord in my memory…

I was invited to an art preview at the de Menil museum, one of those events you go to because you are into the culture, but you are not necessarily prepared for or excited about, especially at a young age of thirty something . . . let’s say that I was growing up my second or third childhood in Montrose, living the bohemian life of an independent musician, playing my first solo concert at Carnegie Hall, and all that cool stuff that goes along with it, the social life, the parties, the cultural life. A scientist friend of mine invited me to a presentation of Mark Rothko’s exhibit at the Menil. It was around lunch time, and I was not in the mood for a long intellectual speech . . . I love Mark Rothko’s work, but the museum’s director was talking about Rothko’s art in a very dry, super-intellectual way, known to art scholars and the like, and it basically sounded like Muzak to me. I was looking at these large paintings, thinking: wow, in those complicated art historian’s words, I don’t hear what I see in front of me at all!

Then suddenly, almost dramatically, Mrs. de Menil rose from her wheelchair and with one round movement of her arms and a few words, including “feeling” and “in space” she struck a chord with all of us. It was that aha! moment, as if I woke up from a winter sleep and was alive, feeling Mark Rothko’s art around me. Wonderful. Powerful. Unforgettable. THANK YOU Mrs. de Menil.

It was the simplest yet best words and movement ever used to describe works of art in my view. And I can really dig the fact that Mark Rothko was an artist that she knew very, very well, as an old friend perhaps . . . but also someone whose artwork she absolutely adored.

This does not in any way diminish my memory of how I met Mrs. de Menil the first time. In retrospect, there is a leitmotif, a theme to each meeting…best described by “outwardly”, “extraterrestrial” interaction.

So the first time we met, I was again invited to an opening at the museum. Since I lived close by, I used to go to openings a lot in those days. I would show up alone, and then I would usually hook up with a lot of different artist friends there. Sometimes we would go out to eat or to a party afterwards. Every show at the Menil was always worth seeing, sometimes inspiring too. This time I showed up alone as usual, and when I looked around, there was no familiar face in the crowd. But one face just kept beaming, and I could not keep my eyes away . . . it was maybe a little bit how I imagined Mother Mary’s face?! Extremely white skin with blue dreamy eyes and with an aura around it . . . all on a very fragile small body, dressed in a simple robe. I was naturally drawn to her, as if I was going to an altar . . . and I trust my instincts with people.

I must digress here and explain a little more . . . the reason why I can approach strangers without any fear also comes from my father who was an extra in a few Hollywood films when he was young. Since early childhood he trained me not to be afraid of approaching complete strangers. He would sometimes stop famous singers or actors on the streets of my hometown Zagreb just to show me how it’s done. He said that people will just play along and pretend that they know you just to avoid embarrassment of being blamed for a loss of memory, and the more famous the person is, the more people they know, so it is harder for them to remember all of those acquaintances, old friends, enemies and lovers. He would start by introducing himself and continuing to talk as if though the two of them are old friends, amigos, from a movie set or vacation. I have to say that I was entertained with the whole act. So call it a social skill or call it a social dysfunction, here I am—going towards her, drawn by her face, thinking of Mother Mary…

I do remember that we talked for a long time, like we were old friends from another planet. Both of us love art, of course, but I remember asking her, where she was from, probably because I thought that she came from heaven. She was a little confused, she stopped for a while, trying to think. We connected right there, because, as an immigrant, I felt similar, not really knowing, not really belonging fully to any place. I think she said she felt like she was the citizen of the world, although she was originally from France, and sure,  anyone could hear that in her accent. Yes she was an extraterrestrial, an unusual creature, full of light and a thinker. It was a great feeling, talking to her, a rendering, beautiful, creative composition, like Thelonius Monk’s music perhaps?

After a while, I spotted a few familiar faces in the crowd and I parted with Mrs. de Menil. “Do you know who you were talking to?” they screamed. “That was Mrs. de Menil!” She never told me her name, but I was not surprised at all. I knew she was special.

After all, I am so grateful for this memory of Mrs. de Menil, a person who contributed so much to our city’s culture.

Loreta Kovacic is a musician and founder of AlchemistPianoTheatre.org, in Houston

Of course you made me cry!

Thank you Loreta, this article reminds me of my “extraterestrial” feeling when I first saw Rothko’s Chapel. The Menil’s collection in Houston stays in my memory as one of a kind. Nothing like any other private collection in the world. Emotional and full of compassion for artists. Great article!

Way to go Loreta! Just as you described on our enjoyable ride to Camp Allen to pick up our kidlins.