by Betsy Huete May 3, 2014
FacebookTwitterEmail

It all started with a red-haired grandma at a loom.

On Friday night April 11, 2014, as local Houston weaver Mary Welch rendered the pattern of a Danish peasant fabric at El Dorado Ballroom, the entire space echoed with mechanized, dehumanized reverberations of domesticity. Welch was one of many cacophonous components of Suzanne Bocanegra’s Rerememberer, a theatrical symphony composed of an accordionist, a DJ, a lighting technician, conductor, and fifty amateur violinists. These disjunctive elements, seemingly a recipe for a nightmarish drug trip, or the very least an extremely irritating listening experience, somehow melded into a sculpturally weighty composition. At once commanding and negating the listener’s engagement, it provided remarkable comfort in its overbearingness.

Welch at her loom

The amplified loom acted as the performance’s industrial heartbeat, a baseline for other sonic characters. The accordion chimed in, emitting romantic and nihilistic dronings that effectively set the stage for conductor Todd Reynolds.

Bathed in a theatrical spotlight, Reynolds flung various manic hand gestures at the violinists, who were only given one hour of preparation time. This resulted in a kind of beehive effect, a desperate eagerness to please and execute combined with a complete failure to do so—a kind of performative authenticity that can really only come from amateurs and children. Crescendoes of out-of-tune-ness filled the ballroom, enrapturing the audience with endearing faulty attempts, human moments that punctuated an otherwise oppressive atmosphere.

Prior to a panel discussion the following afternoon, CounterCurrent Executive Director Karen Farber discussed possible alternative venue choices for Rerememberer.  If it didn’t happen at El Dorado Ballroom, the game plan was to site the piece in the Rothko Chapel—an interesting choice, considering there would not have been any room for the audience. In the Rothko Chapel iteration, the audience would be the participants: the amateur violinists. Farber also mentioned that many of the players said, after the fact, they felt more like spectators than participants, which makes sense given the performance’s all-encompassing, 360 degree installation.

Having the performance at the Rothko Chapel would have been a big mistake. Dense and layered as the sound was, it was also heavily visual and reliant on theatrical elements like intense lighting, flamboyant bodily gestures, and subtle facial expressions to fully flesh out and articulate meaning and to completely facilitate a sense of immersion. Reynolds was a visual focal point of the installation, but he wasn’t the only one hit with spotlight—both Welch and the accordionist were lit up as if under interrogation, depicted as perpetrators as much as participants. Reynolds’ wizardly stances, hurling, pointing, and alternatively and weirdly paternal hand signals were utterly captivating. 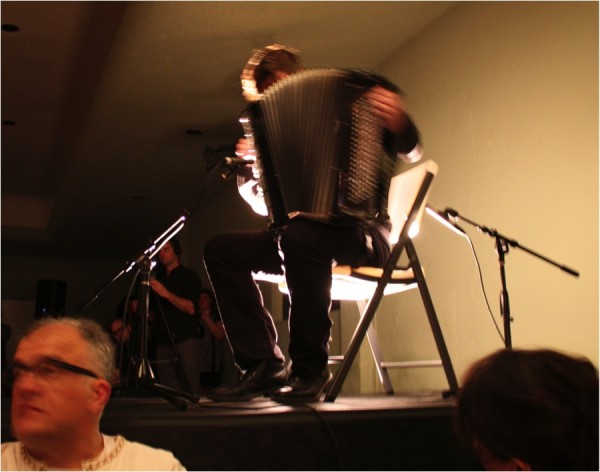 The audience watched intently as the violinists received his aggressive sign language, and it was amusing to watch their faces flit from bewilderment to self-satisfaction to frustration to intense concentration. The installation was meant to sonically and theatrically encompass individualized depictions of effort, and these facial expressions were integral to the piece, tiny moments that recapitulated the overarching concept, which was the magnification of an interior form of labor. 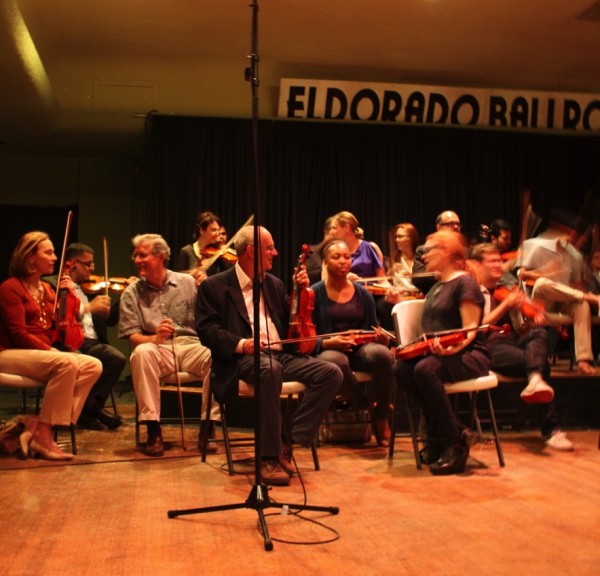 Suzanne Bocanegra’s sound installation, if anything, embodied a palpable dehumanization. Rerememberer viscerally transformed repetitive actions (like Mary Welch at a loom) into a droning, oppressive, industrialized sonic atmosphere. But it was the kind of atmosphere that was also richly populated with genuine moments of people simply trying, which, oddly enough, made the entire work feel authentically human.