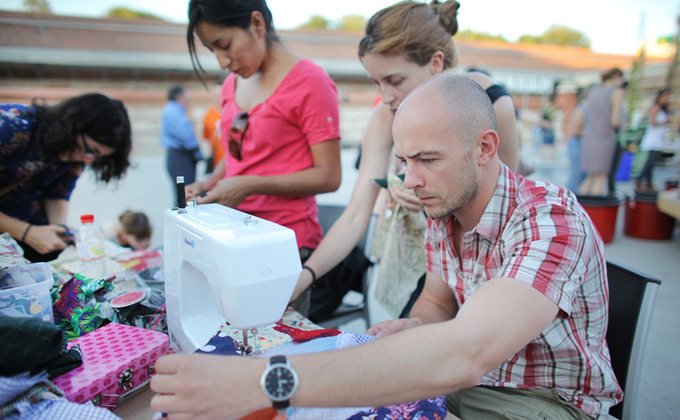 SEWN ON THE STREET is a project by artists Monika Jakubiak and Rebecca Layton. Image courtesy Fuse Box Festival.

In commemoration of the one year anniversary of the collapse of an eight story garment factory in Bangladesh, which killed 1134 workers and injured at least 2515, textile artists Monika Jakubiak of Warsaw, Poland, and Rebecca Layton of Austin will stage a pop-up sweatshop outside the state capital Austin this Thursday, April 24 and at other Austin locations throughout the weekend. The project, part of Fusebox Festival, is called SEWN ON THE STREET and for it the public is invited to come sit at the tables of sewing machines and attempt to make clothes on the spot, as quickly as possible, for the amount of money a typical sweatshop worker would make. The project is meant to point out “the hidden cost of making ‘fast’ clothes in the cheap, dirty, get-it-now global market.”

To participate in this walk-a-mile-in-their-shoes performance, just show up at one of these locations this weekend ready to crank out some cheap garb :