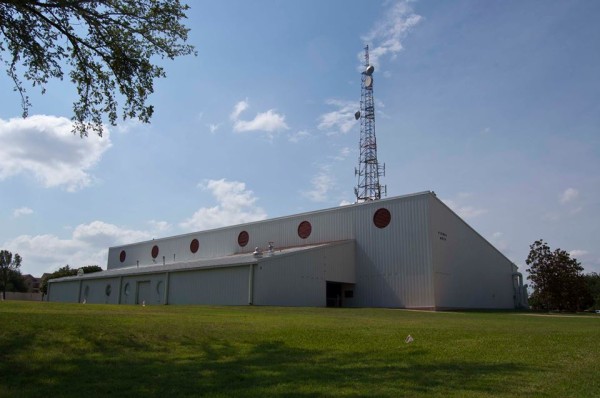 Perhaps as proof of the enduring influence of Rice University’s Art Barn, which was torn down last week, University of Texas at Dallas art alums and advocates are in the throes of a bureaucratic fight to save their own Art Barn, a metal construction similar to the iconic now-demolished Houston structure, that has housed art studios, classrooms and gallery space for the last 35 years. News of the closure of the building came from the Dean of the School of Arts and Humanities, Dennis Kratz, in an email to faculty and interested parties late last week. Kratz states that UTD president Dr. David Daniel “has decided, for reasons of safety, to close the Visual Arts Building completely at the end of the Spring semester,” adding that “cost is a second factor: the price if [sic] repairing and renovating the Art Barn to meet current safety codes is prohibitive.” According to Dean Kratz, repair estimates on the AIA award-winning Art Barn are close to $4 million, quadruple its construction costs 35 years ago.

And just like Rice’s Art Barn melee, UTD’s Art Barn alumi and faculty are up in arms about the building’s slated nullification, citing the historical significance of the building as functional workspace and as a rigorous incubator of ideas that has produced a slew of artists that have greatly influenced Dallas culture. Of the building, the UTD Art Barn Fan Club (a Facebook page) says:

The ART BARN, as it has been dubbed over time, opened in 1978 as the ‘Prairie Flower’ – the Southwest’s reverb to the infamous ‘Black Mountain College’ integrated arts model. . . it has since been the home to legions of aspiring creative talents over the past 35 years. It has been the Cultural fulcrum of interdisciplinary experiments, Studio classes, black room lectures by the notables as Jerry Hunt, Rick Brettell, Dave Hickey, Ives Alan Bois, Phyllida Barlow, Bonnie Pitman, Ted Pillsbury and many engaged, cultural movers. It has showcased legions of local and international artists of every medium in its vigorous open air ‘Main Gallery’. 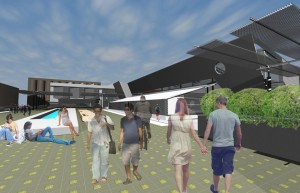 A rendering of how the ArtBarn could be incorporated into new plans for the UTD campus. Designed by UTA architecture students Jareb Parker and Jason Fedors, under the instruction of former UTD architecture professor Wanda Dye.

The Art Barn Fan Club hopes to activate enough support to convince the University’s president to reconsider the possibilities for the structure, suggesting that the building could be incorporated into the school’s continued architectural expansion and redevelopment, maintaining its role of the last 35 years as a collaborative and innovative art environment while serving as a hub of creative energy, much like downtown Dallas’ new Klyde Warren Park. The group has even rendered images of what the incorporation of the Art Barn into redevelopment of the campus could look like, in an effort to push the administration toward a more creative and innovative, Jane Jacobs-style use of the old to invigorate the new.

In fact, at the heart of this Dallas Art Barn fight is the fact that a brand new art and technology building was just completed at UTD last fall, meant, in many ways, to replace the older structure. The new ATEC (Art and Technology) building, also known as the O’Donnell Building, has “vastly superior facilities for painting, design, technologically sophisticated art, etc.,” than the Art Barn, said Kratz in his letter; however, he admits that the criticisms about the new building’s inability to house sculpture or printmaking workspaces are largely founded. “In response to. . . conversations about the limitations of the Arts component of the O’Donnell Building, [President Daniels] is actively exploring the construction of a new building for sculpture and printmaking in time for the opening of the Fall 2015 semester,” he said, also acknowledging that, with the close of the Art Barn and inadequate facilities in ATEC,  a “difficult challenge concerns how or whether we can offer Sculpture/Printmaking in 2014-15.”

A longtime faculty member and outspoken voice on the preservation of the Art Barn has been artist Greg Metz, who appreciates the new ATEC for its class room space, but is firm on the value of the older, less elaborate Art Barn. “I have argued for holding on to our legacy landmark for historic reasons, for architectural reasons, to create community and because they left out sculpture [in ATEC], a place to construct, and printmaking and studio space and more importantly, a gallery that can accommodate sensitive issue oriented works, and material demands and installation infrastructure.” Metz is referring to the Main Gallery in the Art Barn, a space that does “professional cutting edge exhibitions that have been a vital historic part of the contemporary Arts evolution of this city much less this campus.”  The loss of it would greatly effect the Visual Art department’s ability to mount rigorous shows, he fears, that would otherwise not be accepted in a more high-traffic building such as the ATEC.

The fact that the administration is actively pursuing new, ground-up construction to make up for the ATEC’s shortcomings rather than rehabbing the existing Art Barn certainly raises some eyebrows, underscoring the fact that Art Barn supporters are up against a sizable tear down mentality. But Kranz, still offers the Art Barn advocates some hope, albeit very qualified: “Everybody seems focused on ‘saving’ the Art Barn as if saving it would be the end of the discussion. The Art Barn has serious structural and design flaws. Even if it is ‘saved,’ we can’t pretend that we can keep on using it without extensive repairs and renovation, especially if it is going to become a ‘hub’ of culture. That will surely require shutting it down for a significant period of time. That will also require funding. If the building is shut down now, then we have an opportunity to raise the needed funds to save it in the long run.”

Art Barn supporters find themselves in an interesting quandary then, says Metz: “Do we let go and hope someone comes along and builds us a building or make use of what we have earned and our contribution in developing the contemporary art scene in Dallas?”

Is there an alternative to integrate it to the new facilities (a la Pyramid, Louvre, France)? Great architecture can change uses and this could be a great example of finding a solution to keep this icon “in” and not out of the new design. Too expensive to repair that it needs to be taken down ? How about creating funds to maintain It? It tires me to see how historically shortsighted Dallas is.

As a UTD alum, I have been witness to the issue from both sides. While I agree with Ms. Bloch that the historical significance of the building is rather negligible, the art barn has more social value. It was always a place where you could come and feel free to create. And I think that’s why students and faculty alike are so fervent to save it. The Art Barn was a home in the midst of university life. If anything I am a proponent of building on and incorporating it into a new structure.

Please note the design and rendering here was by UTA student Jareb Parker under my instruction in 2013. We collaborated with Rick Brettell, Greg Metz, John Joseph Pomara, Corky Cunningham and Bonnie Pittman for two semesters trying to show how UTD can utilize this fantastic structure today and in the future.