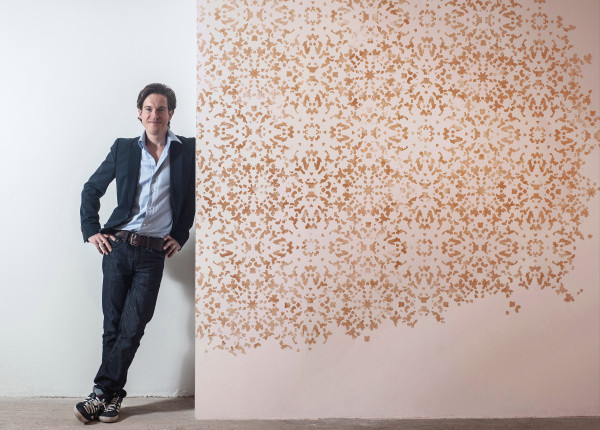 Adam Ball alongside one of his DNA murals.

The brand-name mural has become a staple of the annual Goss-Michael Foundation’s  MTV RE:DEFINE auction, benefitting MTV’s Staying Alive Foundation and the Dallas Contemporary, in addition to the gala party, the pricey art works, and the hoopla that ensues when artists, charity, and MTV collide like atoms in a nuclear fusion reactor in a desperate effort to create energy by putting together things that may or may not belong together. In 2011, EINE spiffed up under-construction Museum Tower. In 2012, Lee Baker painted on the partitions around the soon-to-be-demolished Praetorian Building. This year, Goss-Michael has tapped British artist (naturally) Adam Ball who will create a mural at the Dallas Contemporary, where MTV RE:DEFINE takes place this year.

Ball’s mural almost sounds like an abstract JR, the French artist who recently enjoyed a show at the Dallas Contemporary, only instead of plastering selfies of his audience to walls, Ball takes swabs of their DNA and then transforms it into an abstract pattern. For the MTV RE:DEFINE auction, the winning bidder will provide a DNA sample that the artist will then have photographed before using it to create a unique large-scale mural at a chosen location. “Artistically speaking there is an established idea of what a portrait should be, whereas in this work I hope to reflect the very blueprint of an individual, working from the inside out,” says Ball. The results are perfectly innocuous patterns that resemble thick forests or algea under a microscope though the lens of Technicolor psychedelia.