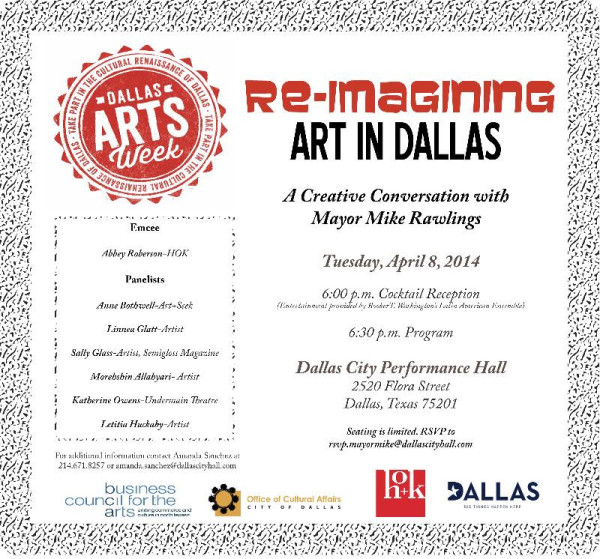 As part of the citywide Dallas Arts Week, April 5-13, Mayor Mike Rawlings will be hosting a panel discussion on Tuesday, April 8, called “Re-imagining Art in Dallas” with a crew of influential members from the artist community.

With this dynamic set, expect the discussion to be unapologetically frank and insightful, as between them these women can speak on the last 30+ years of the Dallas arts scene, as well as its most current, energetic efforts.

And hey, who knows–maybe next year the boys and girls can both sit up on stage? Let’s imagine that Dallas.

For Dallas Arts Month, Dallas Mayor and a...

I am seeking information on an Artist named “Kevin Owens” Self portrait with cut spike. Water color & pencil on paper 2013 EFCPC120.
My art instructor have given me this assignment, and I am trying to find out where the Artist named above have gone to and if he has a website or not. All the information that I have viewed only tells me that he is in Dallas.
Kevin Owens self portrait with Cut Spike mentioned above; that picture is in our permanent Art Collection here at EastField College. Can you help please?
Thanks in advance.