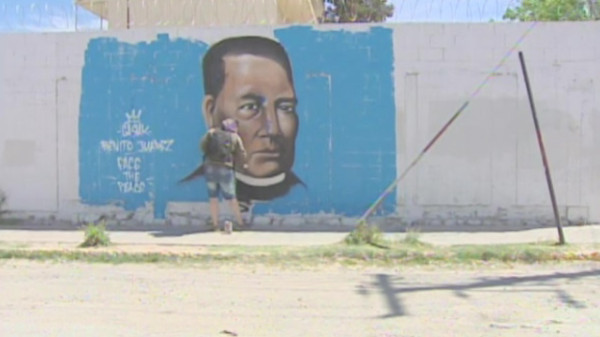 GASAK is a 23-year-old street artist from South Africa who has been hanging out in Ciudad Juarzez lately, says Austin’s ABC affiliate, KVUE. He’s a man on a mission, painting portraits of famous peace crusaders – Nelson Mandela, Mother Teresa, Benito Juarez and Mahatma Gandhi – to help quell the violence of the infamously dangerous border town. And while the project may seem naïve at first, his paintings do resonate: “He’s a street artist who helps us remember and recognize our heroes who promoted peace in the past,” said Ramon Serrano, 14, a student in Ciudad Juarez.

But GASAK is running into problems trying to fulfill his real dream of painting eight faces, half in Mexico, half in the United States, that, when completed, will form a heart shape that spans the border. So far, GASAK has had trouble finding property owners on the U.S. side of the border willing to offer wall space for the project, which is ironic. After all, it has become more and more commonplace for businesses to offer wallspace to graffiti artists in order to help create sense of place and lay claim to trendy, artistic street cred. The problem with GASAK’s project, of course, is the trans-border idea: he’s dealing with some highly scrutinized real estate where there ain’t no love.