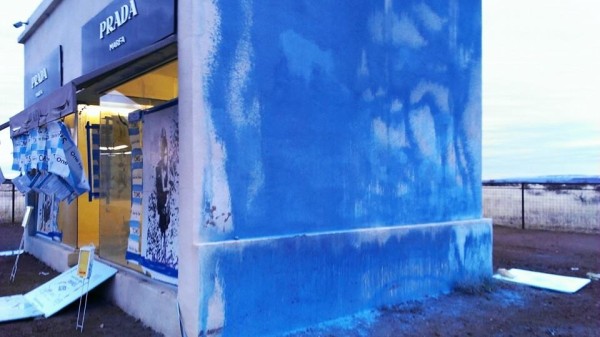 Prada Marfa spray-painted blue and accented with TOMS shoe bags in its latest act of vandalism. Via Marfa Public Radio.

An artist known as 9271977 is likely behind the vandalism that befell Prada Marfa Sunday morning, the Big Bend Sentinel reports. Various clues left on the scene led reporters at the Sentinel, via a quick Google search, to the website www.9271977.com, singling out that anonymous vandal-cum-artist: the signature “J.2014” scribbled on the eastern wall of the small building and the words “Viva Las Vegas,” a phrase which appears both in the manifesto at the crime scene and on the artist’s website.

The damage includes: “both sides of the structure painted blue. . . defaced bibles sporting the TOMS shoes logo strewn around the structure, as well as famous quotes, hung from the now-cut awnings, and posters pasted onto the polycarbonate windows.”  Ballroom Marfa Executive director Mellissa McDonnell Lujan says the damage will likely total between $10,000 and $20,000. This is the second time Prada Marfa has been vandalized.

This latest art-attack follows close on the heels of the infamous Ai Weiwei vase cracking incident. And who can forget our own home state art vandal, Uriel Landeros, who was on the run for more than a year after he spritzed a Picasso in the Menil.

Elmgreen & Dragset’s Prada Marfa installation has provoked a number of reactions since it was constructed in 2005. Most responses take the form of playful snapshots while some would-be art critics register their thoughts in spent shell casings and graffiti. This is Far West Texas, and we would expect nothing less.

Public art like Prada Marfa encourages engagement. Ballroom Marfa and Art Production Fund have taken the steps necessary to keep this public forum alive, whether that means passing around another photo of someone imitating Beyoncé’s leap, painting over a few months of accumulated graffiti or patching up the bullet holes in the windows.

The most recent vandalism of the public Prada Marfa site is different. The large scale defacement of the structure overwhelms this forum and shuts down the dialogue. A site previously recognized as an example of sustainable earth architecture is now coated in toxic paint while the insulation foam garbage left behind by the defacer(s) blows across the highway and into the landscape. Spring breakers still stop to see the installation, but now there are Jeff Davis County deputies on scene as well.

No decisions have been made other than that Ballroom Marfa and Art Production Fund will restore Prada Marfa, and it will remain a public site. We’re close to resolving the widely publicized issues with the Texas Department of Transportation, and we expect Prada Marfa will be around for years to come. It will surely continue to inspire a wide range of commentary; we just hope that a single point of view — one comprised of blue paint, industrial adhesive and insulation foam — will not override and destroy this exchange of ideas.

The act of protecting and repairing this art work is vandalism. Prada Marfa “was intended to never be repaired, so it might slowly degrade back into the natural landscape-wiki”. People are natural things and vandalism is a byproduct of nature, so repairing a work that is supposed to be degraded by nature is vandalism. These acts of repair are an attempt to reinforce the capitalist values it criticizes by maintaining the artwork as a cute place to stop on a road trip.

Yvonne Force Villareal and Doreen Remen, who are producing Prada Marfa through their nonprofit Art Production Fund with support from Ballroom Marfa, a performance and alternative-art space in Marfa.

“We loved this proposal for many reasons,” Ms. Villareal said. “We loved the idea of the piece being born on Oct. 1 and that it will never again be maintained. If someone spray-paints graffiti or a cowboy decides to use it as target practice or maybe a mouse or a muskrat makes a home in it, 50 years from now it will be a ruin that is a reflection of the time it was made.”

I’m not sure what “capitalist values” are reinforced by repairing a “cute place to stop on a road trip.” It’s not like they charge you to take your selfie there. There’s no concession stand or gift shop.

Having this fantastic work sitting around covered with another ‘artist’s’ crazy mumbo jumbo completely defeats the purpose of it being there.
Also, if vandalism can be justified as ‘a byproduct of nature’ than so can murder. Just sayin’

Prada Marfa was always a provocation. That someone took action is hardly surprising. Prada Marfa was made to be vandalized, and has been vandalized many times, this is just the most comprehensive response, if you don’t count Richard Phillips Playboy Marfa (whose conceptual “damage” was also repaired).