The Art Barn, which was slated to be demolished yesterday, has been granted a brief “stay of execution” for one or two weeks as Rice University considers an option to have the much-loved building moved rather than demolished. This follows after a group of Rice alumni offered to pay to have the building dismantled, moved and stored until a new site for it can be found. 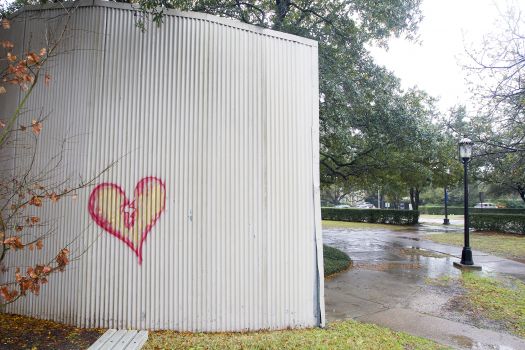 Affectionate graffiti scrawled on the side of the Art Barn. Photo By Cody Duty/Staff, courtesy Houston Chronicle

The corrugated-metal building was erected by Houston art patrons John and Dominique de Menil in 1969 for a temporary exhibition. Designed by architects Howard Barnstone and Eugene Aubry, the building proved an incredibly influential work of architecture. Rice University, saying the metal structure is in poor condition, has planned to raze the building to make way for lawn.

The crazy thing is that these alumni might have paid Rice to restore the building (the cost of which was the ostensible reason for demolishing it), if they had been asked.