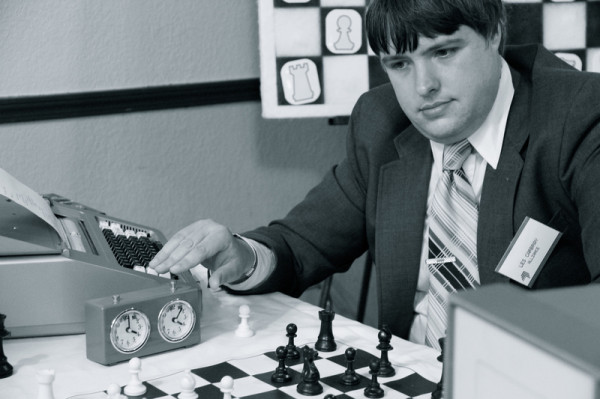 Of the dozens of artists featured at this year’s Whitney Biennial, only one currently works in Texas, Andrew Bujalski, and he’s a filmmaker. He hails from Austin, a city which is currently besieged with filmmakers, industry moguls, techies and press, all clamoring to make a filmic discovery at South by Southwest. Bujalski’s film, Computer Chess, far from that maddening crowd, will have its day with another on the second floor at the Whitney Museum of American Art in the Film and Video Gallery where curator Stuart Comer has determined it as Art. He’s right.

Bujalski’s movie is about a 1980 competition between computer programmers who pit their programs against one another in a chess tournament. Though it’s fictional, when I saw Computer Chess last spring at the Oak Cliff Film Festival, I spent the first half hour of it utterly convinced that it was a documentary made from vintage footage discovered in the trunk of an old burnt-out Datsun. All the signs of the era are there to prove it, from the pure monochrome film quality to the pitch-perfect polyester suits and thick, rimless glasses to the cumbersome grey computers all the nerds lug around the innocuous hotel. Watching it feels like opening a sterilized time capsule or, perhaps more aptly, like seeing a live-action version of one of Thomas Demands highly articulated paper history scenes.

So why does Comer think Bujalski’s movie is Art? Mostly it has to do with capturing, so adroitly, the late 20th century’s seismic movement  towards human dependence on digital technology:

Bujalski allows the viewer to observe as the characters tinker with their machines and discuss the scientific and philosophical implications of artificial intelligence. With wit, intelligence, and occasional bursts of psychedelic oddness, Computer Chess draws the analog past into our digital present, reviving the ghosts of a moment defined by technological transition while elucidating our increasingly computer-controlled present and future.

Computer Chess shows today, March 9, at 12:00 and 2:00, in the Film and Video Gallery on the Second Floor of the Whitney Museum of American Art.

Parties and Spells: Selections From the 2021 Oak...