Open Call for Artists at the Fringe 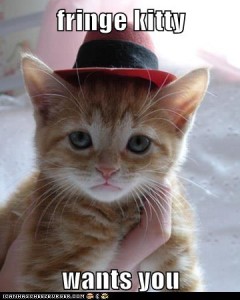 Yes, this image is a repeat from last year’s announcement, posted by Bill Davenport, but there’s no way to top this!

Those who survived the recent Lone Star Explosion, Houston’s International Performance Art Biennale, may have been left feeling creatively inspired or, at least, challenged. Artists don’t have to wait until next year to realize their crazy performance or art project ideas; the Houston Fringe Festival has announced that it is now accepting proposals for its own three-day extravaganza, which takes place at theatrical and non-traditional venues in Houston’s East End in late September.

Proposals should adhere to the Houston Fringe mission: “to present daring and conceptually challenging performances that fit outside the mainstream.” Open to both emerging and established theater, dance, film, music, and visual artists, applications are due by May 1.

The Houston Fringe Festival is in August, but...