Annabel Daou’s fortunes seem to be on the rise at Conduit Gallery in Dallas, as her typically incantatory mode of word-art takes on a prophetic cast. She gave a brief fortune-telling performance—one might say palm reading and writing—and evidence of this remains in the form of a delicate enclosure for soothsayer and client, but her repeated serpentine phrases, rendered in English and Arabic, are what are most compelling and charming. 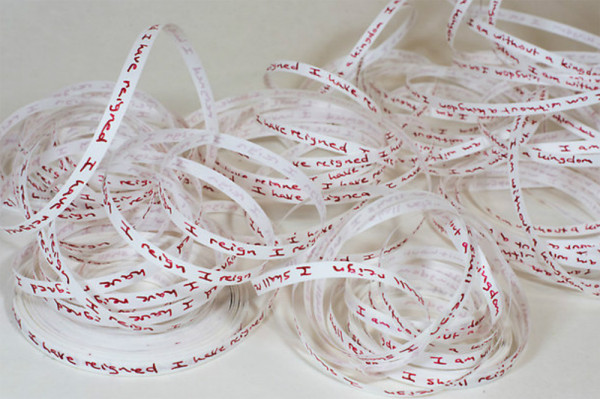 The exhibition is titled Measure and is introduced by a quotation from that crusty old philosopher, Boethius, who reminds us that until the rug is pulled out from under us, we cannot hope to gauge the measure of ourselves. His greatest work, Consolations of Philosophy, was written while he languished in prison and was translated by the scholar-monarch, King Alfred the Great. One of Daou’s phrases reads: “I shall reign, I reign, I have reigned, I am without a kingdom.” It’s a message telling us to watch it, relevant not simply to a world of King Lears, but to any tyrant, from the fictional Francis Underwood to the brutally real Bashar al-Assad. This is heavy stuff and one hopes for a bit of leavening. The will to power, or just the sense that one has control over the events that shape one’s life, coupled with the overwhelming sense of chance, maps a grim binary. The ancients were cognizant of this paradox of human life, and invented all sorts of interesting theories about how to live well in order to cope with the here and now rather than be disconsolate and paralyzed. When things went awry, it was explained by telling a story that reminded mere mortals of their status as the playthings of the gods. 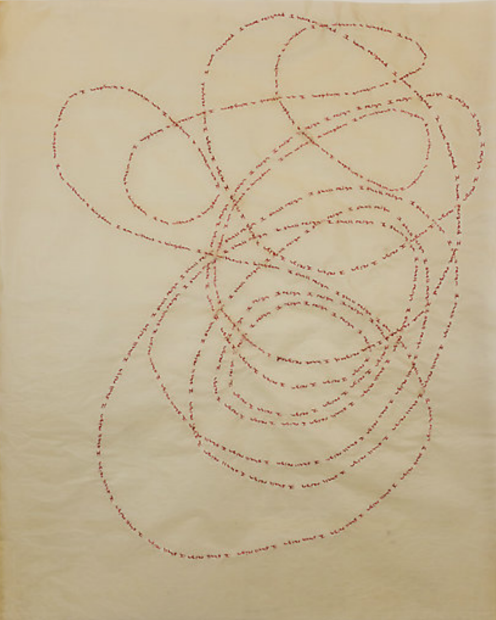 In the presence of Daou’s work, we are apt to clothe our anxiety in a tissue of charm. But charm is a double-edged sword in this context of late Lettrisme. For me, Daou’s work raises the question, softly at first, of the appropriateness of charm as a means to disarm a brute fact of our existence. I suggest that the limited lexicon of prophesy in Measure and the self-conscious variations of the sinuous ribbon of archival-quality mending tape endow the work with an element of menace, which more than compensates for the sweetness of the deft pen strokes. Daou just manages to steer clear of the saccharine, a quality that stalks elegance in general. Measure lives up to its name in this regard by transforming the icy finality of predetermination into a kind of unnamed giddiness of anticipation. I believe it is this undifferentiated sense of apprehension—not yet attached to a specific future, not yet resolved into expressions either elation, despair, or confusion—that we experience when we offer our palm to the Fortune Teller. I yearn to see more of this, and I wish that Conduit would take the bold step of mounting more monographic exhibitions by artists who could pull them off. As it stands, Daou’s work seemed ill-served alongside distracting efforts by two other artists. I predict bigger exhibitions for Daou in the future and I’m no soothsayer.

Annabel Daou: Measure will be on view at Conduit Gallery in Dallas through March 29, 2014.

Michael Corris is professor of art at SMU and editor of a new series for Reaktion Books, London, which focuses on art since the 1980s.

I had the chance to discover Annabel Daou at this year’s edition of Art Dubai, and felt hypnotized looking at her works. http://bit.ly/1oAby8l