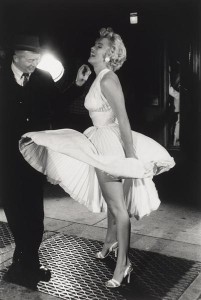 To draw attention to its current exhibition Made for Magazines: Iconic 20th-Century Photographs, the Museum of Fine Arts, Houston (MFAH) is holding an old-fashioned photo contest. Of the 80 works on display, the MFAH has selected seven photographs to inspire contest entrants, including O. Rufus Lovett’s Kilgore Rangerette, George Zimbel’s shot of Marilyn Monroe over a subway grate and Peter Stackpole’s portrait of Alfred Hitchcock.

With the popularity of social media, images come and go in milliseconds, and the MFAH hopes that this exhibition will show that “the impact of important images made for magazines still resonates in the 21st century.” Of course, the contest itself takes place on social media and the name of the contest is “#made4magz.” Open to all skill levels, whether using fancy cameras or smart phones, maybe the contest will at least inspire some obsessive photo posters to put a little bit of forethought and classical inspiration into their selfies.