In Suzanne Anker‘s While Darkness Sleeps, currently showing at The McKinney Avenue Contemporary in Dallas, the gift of modernism keeps on giving. It’s “bio-art,” a constituent part of “media art,” the latest name for science and technology hybrids with contemporary art.

Media art (formerly “new media art”), including Anker’s, is evidence that modernism never died, it just plodded along, unnoticed and seemingly out of style, neither waxing nor waning during the Epoch of Irony that was postmodernism. It gurgled, bubbled, and frothed: light-art, kinetics, Op Art, early digital image making, performance with early wireless technology, and robotics. It is a modernism that, shorn of the name, coalesced in the new millennium as media art. And now, here it is again as Anker’s bio-art. As an artist working with living materials and the question of the biological design, Anker rubs shoulders with Critical Art Ensemble, the Brazilian NanoLabs, Roy Ascott, Eduardo Kac, and Cleve Backster in the shallows of time and Gyorgy Kepes, Laszlo Moholy-Nagy, Raoul Francé, Ernst Haeckel, and Charles Darwin in the depths.

Only a tangent of art-making during the many decades of postmodernism (roughly 1955 to 2008), media and bio-art, with their implicit philosophies of totality, sincerity, and scientific proof are today central. Contemporary media art bears within it a vision of art, science, and technology united. This totality is a form of the art-as-life quest, pursued by various twentieth-century artists, such as Naum Gabo and Antoine Pevsner’s in their Realist Manifesto of 1920 and, later, in Alan Kaprow’s life-as-art performance antics in the 1960s and 1970s.

Anker is interested in revealing two sides to life: life as it is created naturally and artificially. She uses three-dimensional printing, animation, time-lapse photography, and multi-channel pocket projectors to highlight the fine line between the artificial and the real. She is concerned with the God-like power of technology to create life, and how this is folly. 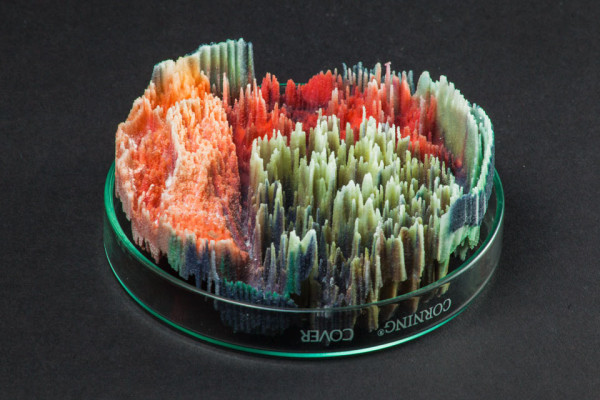 The Petri dish is a repeated motif. Remote Sensing is a series of tiny crystalline landscapes in chalky resins. They look as if they have grown from the Petri dishes in which they sit while, in truth, they have been designed, developed, and printed by Anker. 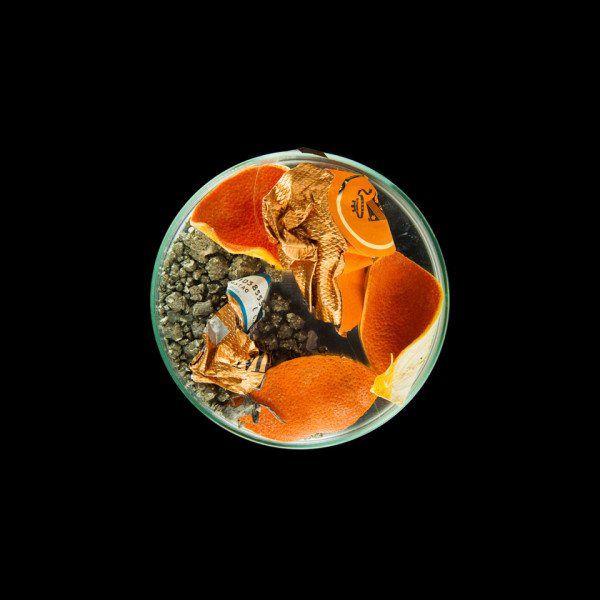 Vanitas (In a Petrie Dish) also deploys the cyclical symbolism of the Petri dish. They are where life begins and ends; scientists use them to orchestrate the temporary growth of living cultures. A series of sixteen digital prints, Vanitas shows a variety of remnants sitting in the circle of life and death that is the Petri dish. A tiny dead frog is ensconced in a flower petal, which sits atop a pile of pinks eggs or jellybeans. Bits of garbage align with orange peels in another. Anker’s variations on matter within the sixteen dishes blur the boundary between living and dead material, which again brings us back to the quasi-God-like abilities of woman-the-scientist and woman-the-artist.

As a bio-artist, Anker appropriates the tools of the scientific lab. In Palette (Green, Aqua, Orange, Red, Fuchsia), she uses animated imagery of a coral reef. Four tiny projectors attached to tall stands each show a short loop of a moving coral in a different color within small Petri dishes situated at the center of the gallery. Unfortunately, this piece feels more about technological fetish rather than content. The imagery is not quite vacant, but simply lost amid the physical noise of metal armatures. 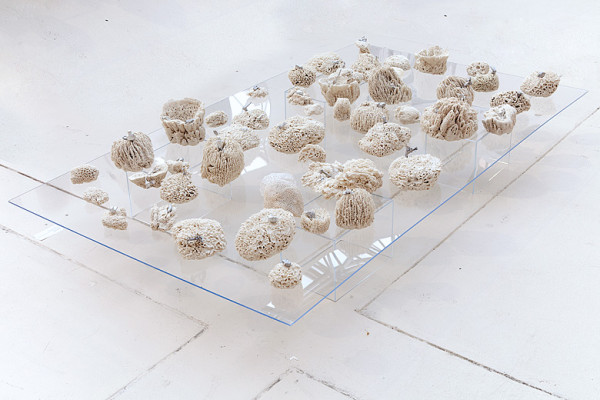 Biota (2012) and Carbon Collision in the Diamond Mind (2013) are floor sculptures. Each installation consists of manmade rocks sitting on low-slung Plexiglas tables. The forms look like natural accretions heaped up beautifully over long periods of time. Tiny 3D-printed Cycladic figurines and Venuses of Willendorf perched among the rocks hint at the related fathomlessness of the deep ocean and prehistoric time. 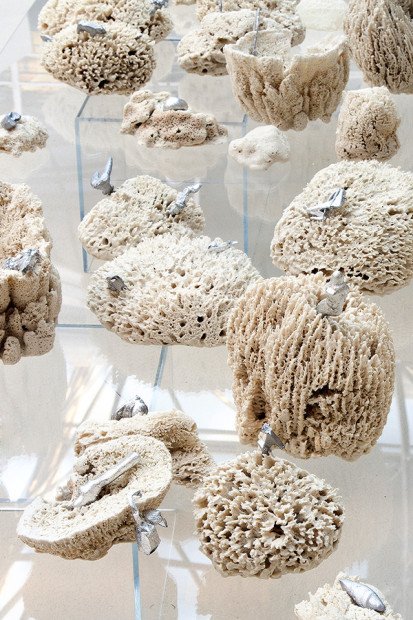 Ultimately though, the wonders of Anker’s work are tamped down by darkness and poor installation. Her scientific photographs of dead birds and aquatic creatures hang directly on the wall, edges curling up and waving in the wind. There are plenty of successful precedents for exhibitions of this type: Moholy-Nagy’s work at the New Bauhaus in Chicago in the late 1930s, Gyorgy Kepes’s The New Landscape of Art and Science at MIT in 1951, and the British pop artists’ experimental foray into the biosciences with Growth and Form at the Institute for Contemporary Art in London, also in 1951. In all of these shows, curators and artists used scientific imagery to convey a dynamic and changeful sense of art. The idea was to put forth a concept not of static form but form-in-process, developing biologically over time.

It’s notable that Anker makes us question the origins of ourselves and the world through sincerity and scientific inquiry, not the cudgel of irony. Anker does not use conceptual linguistics or Pictures Generation simulacra to waver the balance of certitude. Rather, she attempts to inject science into art as a means of triggering big questions. Is art living? Does it live in our memory? Does it live in the moment as a performance piece? As artists experiment with plant life in their work, does it live botanically? If it has electricity coursing through it like a nervous system, what keeps us from identifying it as a nervous system? Hers is a modern form of catalyzing doubt.

Suzanne Anker: While Darkness Sleeps is on view at The McKinney Avenue Contemporary, Dallas, through March 1.