HAA to Host Get-Together for Politicians and Arts Orgs 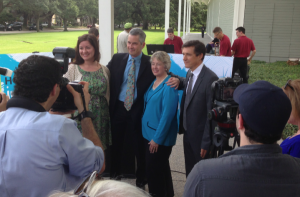 The Mayor at September’s “Houston is Inspired” event

Tomorrow evening, Monday, January 27th at 5:30 pm, the Houston Arts Alliance (HAA) will host the “2014 Elected Officials Reception for the Arts” at the Hobby Center for Performing Arts. Mayor Annise Parker will talk about her priorities for the arts in her next term and welcome Houston’s new City Council and other elected officials.

A lot of the same folks who were at the fall arts kick-off “Houston is Inspired” event at the Menil (which Glasstire’s Bill Davenport declared a “non-event”) will be in attendance, but there might actually be some specifics within the Mayor’s announcement, which HAA’s press release promises will include “positive messages about the future for Houston’s arts and culture.”

Women of Color in the Arts to Present...

Houston Artists: Today’s the Day to Learn How...

There’s a day for that?