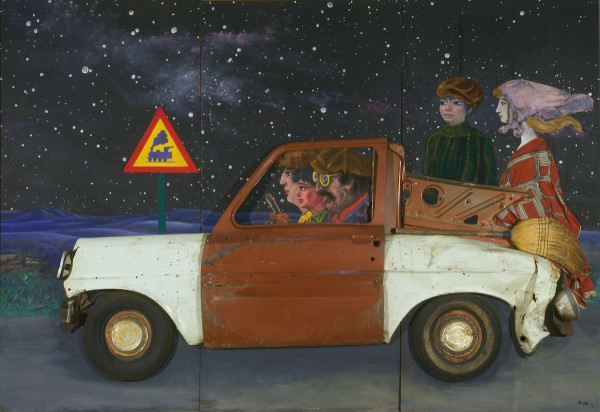 Antonio Berni’s works at the Museum of Fine Arts, Houston (MFAH) explode with an unabashed, visceral materiality. The paintings, assemblages, and prints dedicated to two fictional characters Berni devised—Juanito Laguna, a young boy from a shantytown on the outskirts of Buenos Aires, and Ramona Montiel, a seamstress-turned-courtesan aspiring to social ascent—assert their vitality and importance through the very perseverance of the artist. If Juanito and Ramona still matter, it is because they apparently mattered to Berni himself a great deal. Between late 1950s and late 1970s, through nearly twenty years of his career, he stubbornly and unapologetically chronicled fortunes and misfortunes of his personages as they grappled with the fallout of the rapid urbanization and industrialization of Argentina. Over 130 of these works are on display at the MFAH. Their material intensity reverberates through the intensity of their author and, further, through the intensity of the uncommonly dense museum display.

Large-scale paintings and assemblages dedicated to the life of Juanito are often literally made out of the stuff of the protagonist’s everyday life, supposedly recycled from the shantytowns of Buenos Aires: reclaimed wooden planks, sheets of corrugated metal, cardboard boxes, and urban detritus. (It is impossible to verify whether it is really the case but they successfully stand in for such materials.) 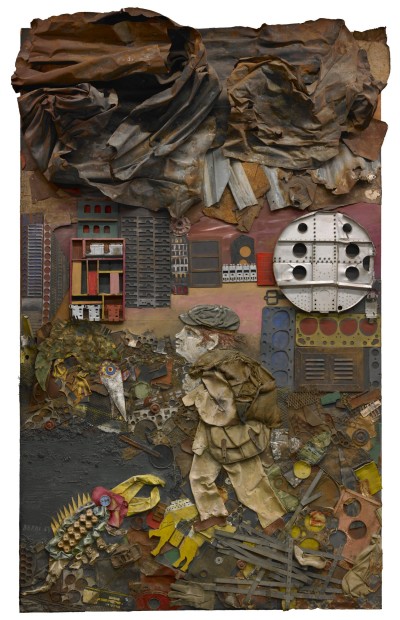 In Juanito Goes to the City (1963), a young boy with a sack thrown over his shoulder (his family migrated from the rural provinces in search of factory work) wades through the sea of industrial debris, broken toys, and discarded clothing. He’s a kind of a flattened-out scarecrow. His shirt, pants, cap, and bag are actual objects stuck to the support; only his face is made out of thick globs of paint. The city is a distant entity on the horizon, looking like apartment complexes made of children’s blocks, weighted down by ominous, looming clouds of rusted, twisted, and crumpled metal. Juanito is a lonely being, but not the only living creature in this assemblage. Two grotesque animals, perhaps scavenging on the human’s refuse, observe him.

In the 1960s, Berni’s cityscapes are dark, almost dirty; in the 1970s, fluorescent, unnatural colors mark painted elements of the environments. In Juanito Fishing Between Cans (1972), both the sky and water are rendered in glowing reds. The boy is surrounded by waste from industrial consumption: mounds of motor oil cans, flattened soft drink and beer cans, and coffee containers. The logos of multinational companies fleck this landscape with bursts of color.

The series dedicated to Ramona consists mostly of so-called xylo-collage-reliefs, ingenious combinations of traditional woodcut with the collage of found materials and commercial printing plates. Many of the intricate matrices that formed these works are displayed next to the corresponding prints, allowing viewers a glimpse into Berni’s inventive process, juxtaposing hand-generated marks, found materials, appropriated images, and art-historical references. Despite the difficulty of printing such complex plates, the content of these works supersedes their technical virtuosity. Berni transforms the junk and scraps of everyday life—doilies, shreds of lace, coins, keys, metal fragments from washing machines and refrigerators, commercial plates used to print bus tickets and cheap ads—into grotesque visions of machine-like world. 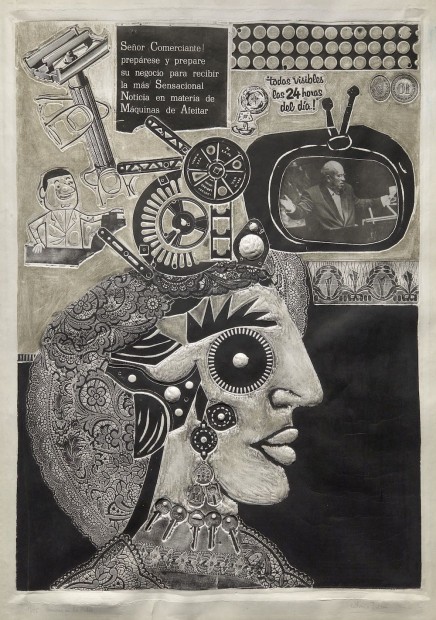 In Ramona in the Street (1964), the most life-like character is the figure of a politician, printed from a photogravure, inserted into a cartoonish television set. Ramona, surrounded by the barrage of ads, glances at the viewer with en enormous eye made from a large, round metal piece. Ornate laces that vest her do not occlude her mechanistic qualities—a motif reoccurring through the series. In Ramona Lives Her Life (1963), her supposedly most feminine attributes, her breasts, are constructed from two gears; her nipples are a button and a washer. Ramona’s “protectors” and suitors—clergymen, officers, bullfighters, and “old men”—are not much different: disjointed characters barely assembled from junk. If they are what you consume, they are the waste products of the industrializing world. 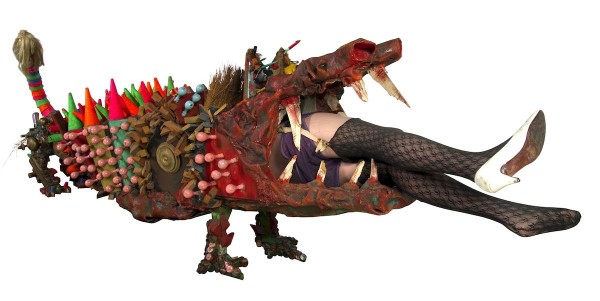 The Juanito and Ramona series, as well as the series of found-object assemblage sculptures Monsters From Hell Challenge Ramona Montiel, were produced during the peak of Berni’s mature career. Born in 1905 in Rosario, Argentina, Berni was a seasoned veteran of both Argentine and European art scenes, having intermittently spent time in Paris since the 1920s. Though he can be considered a committed “realist,” as he was associated with the so-called “New Realist” movement of the 1930s and never really abandoned figuration and representation, he had also brushed elbows with Surrealism, Art Informel, the European spin on gestural abstraction, and, towards the turn of the 1950s and 1960s, with French Nouveau Réalisme and US-American Pop Art. Awarded the International Grand Prize for Printmaking and Drawing at the 1962 Venice Biennale for the series of five large-scale woodcuts depicting Juanito swimming, fishing, and hunting birds in his impoverished neighborhood (all of them on view at the MFAH), Berni enjoyed a widespread international exposure on both sides of the Iron Curtain throughout the next decade, with exhibitions in his homeland, the United States, France, Sweden, Italy, Uruguay, Mexico, Brazil, Cuba, Yugoslavia, East Germany, and Poland, among others.

To this day, Berni remains a household name and a sought-after artist in his native country, as evidenced by children’s books introducing Argentine youth to the life, work, and personages of  “Maestro Antonio,” which augment the documents displayed at the MFAH, and by a high profile robbery of fifteen of his works in Buenos Aires in 2008. Despite this success and acclaim on the national level, Berni’s work has not been shown in the United States in an individual museum exhibition in nearly fifty years, since the traveling retrospective that debuted at the New Jersey State Museum in Trenton in 1966. The current exhibition at the MFAH is a welcome and thought-provoking remedy to this omission.

It is not simply the filling of a historical gap that’s at stake here. Berni’s exhibition raises pertinent questions regarding the construction of artistic canons, both in Latin America and beyond, and the ongoing debates on the relationship of aesthetics and politics. In the context of the institutionalization of Latin American art in the last couple of decades, Berni’s oeuvre constitutes an antidote to the dominance of cool, elegant geometric abstraction (such as, the work of Brazilian artist Waltercio Caldas shown recently at the Blanton Museum of Art, which I wrote about here). On the other hand, it also challenges Latin American conceptualism as the limit case of art’s political engagement—the ultimate attempt to shed the artifices of representation and through the experiences induced by actions and interventions enact an actual change in the world (a case in point might be another Argentine project, 1968 Tucumán Arde).

Does representational, figurative art amount to nothing but “aestheticization” of poverty as some of Latin American artists of younger generations feared? Can an image itself have a critical potential in the capitalist society, and of what kind? Or is representation in fact a “cipher of regression,” to use the title phrase of Benjamin Buchloh’s 1981 essay? If such questions seem outdated and naïve in a time of seemingly unlimited artistic pluralism, why do we see so little figurative art in the historical collections and surveys of the twentieth century unless relegated to some minor, “regional” school?

There’s a kind of an overwhelming power in Berni’s work that stems from the dexterous balance of raw immediacy, especially in the Juanito series, and highly controlled technical mastery, in the prints of the Ramona series; from the constant vacillation between the endearing familiarity, in the cartoonish, illustrative depictions of Juanito and his family, particularly in the 1970s, and the monstrous, grotesque strangeness, in the machine-like representations of Ramona and her entourage; from the push and pull between the onslaught of the very real “stuff” and the constant subjugation of that “stuff” to the narrative; finally, from the tension between the filthiness of junk and its transformation into illusory luxuries. Like my description, Berni’s work oozes excess—the kind of excess that, arguably, we still don’t know how to handle.