Performance Art Festivals to “Put Houston on the Map” 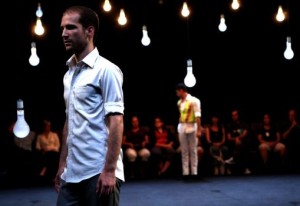 Artist Suzanne Bocanegra will bring her “Rerememberer” to CounterCurrent 14. The piece involves 50 violinists, a weaver, an accordionist, a DJ and a conductor. Photo By Benjamin Nicholas.

The University of Houston’s Cynthia Woods Mitchell Center for the Arts is organizing a brand new festival of experimental performances called CounterCurrent 14, which will debut on April 9-13. Karen Farber, the Center’s executive director told the Houston Chronicle, “We’re trying to put Houston on the map for new performing arts.”

Before April’s new festival, though, the Lone Star Explosion 2014 will also present three days of performance art on February 20-22. In fact, it will be the second iteration of this Houston international performance art biennale. If the first biennale didn’t quite put Houston on the performance art map, the one-two punch of this year’s festivals should do the trick.

If there is such a thing as “more mainstream” in performance art, CounterCurrent will probably win that title. Both festivals will feature both internationally-recognized interdisciplinary and performance artists, as well as local artists, but the posted images from the Lone Star Explosion’s roster includes a pretty high percentage of naked (or near naked) performances. CounterCurrent has yet to finalize its full schedule, but its selection of venues make it unlikely that it will compete in the performance art nakedness category.

CounterCurrent will be free and is being funded through the Mitchell Center’s endowment, with some funds coming from grants from the Houston Arts Alliance, while the Lone Star Explosion is funded mainly through ticket sales ($13 for a single night of tickets/$30 for the full 3-day weekend of events). Performance art fans, though, will want to catch at least some of each festival to experience what Houston has to offer as a new major player in the international performing arts scene.

Lone Star Explosion is also funded in part by the Houston Art Alliance. Mayors Initiative grant. We are extremely grateful for their support in both the 2012 festival and in the upcoming 2014 event. We are also are very thankful to DiverseWorks, Art League Houston, Box13, Avant Garden, notsuoH and CAMH for there generosity of space and time

How do I buy tickets

you can buy tickets for Lone Star Explosion following this link: http://lonestarlive.org/?p=4970