Three years ago, Los Angeles’ Museum of Contemporary Art (MOCA) was in big financial trouble and, after an attempted merger from the Los Angeles County Museum of Art, it launched a big fundraising campaign to rebuild its endowment to $100 million (from $18.5 million in 2010). Earlier this month, MOCA announced that it was so successful that it would continue the campaign and shoot for $150 million. 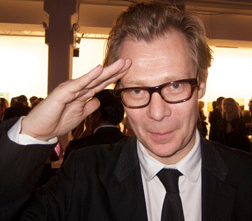 Barely a week after that announcement, MOCA put an end to the director search rumors and revealed its selection of Philippe Vergne as new director. (More details are in this LA Times article.) Vergne succeeds the very controversial tenure of Jeffrey Deitch, who resigned in July after staff layoffs, divisive curatorial choices, and very public board member resignations. The director search committee included the four prominent California artist/board members who resigned over frustration with its leadership: John Baldessari, Catherine Opie, Barbara Kruger and Ed Ruscha.

Vergne was director of the Musée d’Art Contemporain in Marseille from 1994 to 1997, and then a senior curator at the Walker Art Center in Minneapolis. He went back to Europe briefly to run the private François Pinault Foundation for contemporary art, but returned to the Walker as its deputy director and chief curator in 2005. He was one of the curators of the 2006 Whitney Biennial and, since 2008, has been running the Dia Art Foundation in New York. Vergne organized the 1997 exhibition How Latitudes Become Forms: Art in a Global Age, which traveled to the Contemporary Arts Museum Houston, and the 2007 Kara Walker: My Complement, My Enemy, My Oppressor, My Love, which was later on view at the Modern Art Museum of Fort Worth.