Ten days ago, 17-year-old high school senior Zak Ziebell posted an old art project on Reddit and now it’s gone viral—not just passed-around-Facebook-a-bunch-of-times viral, but picked up by newspapers and blogs around the globe. In fact, it seems widely distributed outside the United States as proof of stereotypical American geographic illiteracy.

While at a summer program at the University of Michigan School of Art in 2012, Ziebell was given an assignment to create “a piece of art that would reveal something unseen.” The San Antonio student then approached 29 strangers on the Michigan campus, handed them a pen and half a sheet of paper, and asked them to draw a map of the world. He also added his own drawing (although Ziebell is better at maps than most college students according to his recently published historical comic book “World History: The Comic: Part 1,” available on Amazon). 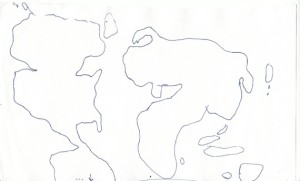 One of the 29 drawings Ziebell collected

The 30 maps were layered on top of each other to create a blurry “average” map of world geography; Ziebell then took a NASA satellite image and manipulated it to fit into the new average shapes. 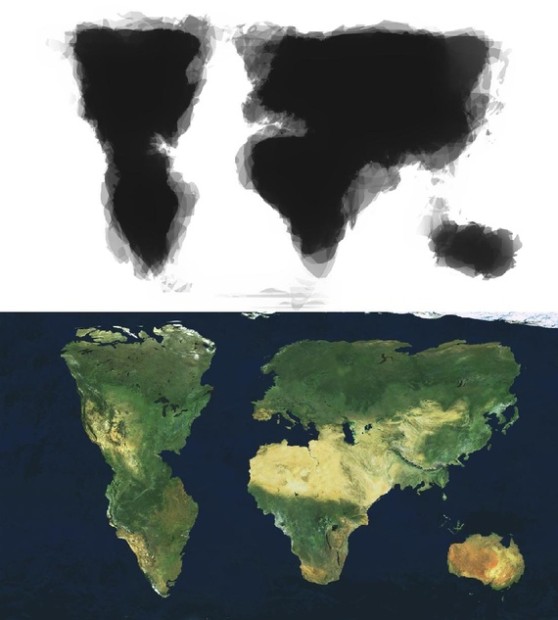 After posting his results on Reddit, the UK Daily Mail ran the story with the headline “The world according to Americans: Map reveals how students imagine our planet – and the UK, Alaska and Japan DON’T even exist” and news organizations from other countries followed suit. In the extended comment sections of the various stories, readers start off with disgust at American ignorance, but often deteriorate into nationalistic squabbling. Even the original Reddit comments begin:

“How do you like them apples, New Zealand?”
“oh, we’re fairly used to this.”
“New Zealand is Australia’s Canada.”

The Atlantic ran the story today, listing a number of international papers that noted that their countries were grossly misrepresented or totally omitted, ending with the Instanbul newspaper’s shocked headline “No Turkey on this map!” Even the relatively mild comments in The Atlantic seem to be mostly snark from serious geography nerds until someone finally posted, “I think the missed story here is that of a 17-year-old high school student that created a fantastically thought provoking piece of art.”

Ziebell, son of artists Rob Zeibell and Liz Ward, attends the San Antonio magnet school program International School of the Americas and plans to major in studio art and history.

Mark my word. This kid is headed somewhere.

I think the map was a good 1st attempt.

I would like to see the same experiment done across the world under the same circumstances. I think the results would be very interesting…