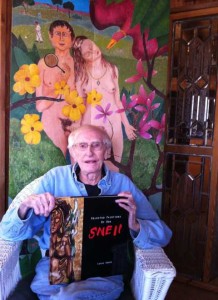 Artist Don Snell died peacefully at his Georgetown home on Monday morning at the age of 91, reports his partner Ruth Roberts. “Don lived a rich life, full of fun and fantasy,” she writes, “and blessed by more friends than I can imagine.”

Known mainly for his expressive figurative paintings, Snell also created sculpture and photography. Throughout his career, Snell had exhibitions throughout the U.S. and Europe, as well as in smaller venues near his home. On a 2004 painting, he wrote a text “An artist makes a statement,” reprinted on his website, which reads in part:

It was never my intention to be an artist. But I read “Lust for Life.” The idea of drawing naked females was of great interest to me. Besides I had no marketable skills so I took the vow of poverty and became an artist…..So far my career has been uneventful. But when you consider I am 82 and still producing great works of art, things have not been all that bad.

Snell was born in Sioux Falls in 1922, grew up in Kansas City, and served in World War II in the United States Army Air Corps. Snell received his BFA from the University of Texas at Austin and completed postgraduate studies at Tulane University in New Orleans. He subsequently taught at Tulane, as well as at Arlington State College in Texas and the University of Houston. In 2010, Snell was awarded the Lifetime Achievement Award from the Austin Visual Arts Association.

Ruth, I just saw this, and I’m so sorry. Seeing his work always gives me pleasure.

I have two paintings that have been in our family for many years. One is a desert land scape signed Snell the other a Mexican veranda signed Ruth both framed similar belived to be painted by the same family? Trying to finds any information on the arrests,can you please help?

I am Don Snell’s partner (and widow). Without seeing the image signed “Snell,” I cannot tell whether it is by Don Snell or not. It does not sound like one of his works.

I am not an artist. I have no idea who might have painted the Mexican veranda you mentioned.

While I have not talked to you in years, I think of you and Don often. You have both been on my mind for months and I regret I am only now contacting you. Don’s work gives me pleasure every day as I look at his Lion and Sleeping Gypsy and move it around my house to keep it fresh – what a great sense of humor. You and Don were so kind to let us pay for it a little at a time — I just hope I paid it in full. You also are an artist of words, relationship,p and perception and I have learned much from you over the years. Please do let me know if I still owe on the painting 🙂 512-496-1828

Ruth must empty the gallery and is selling many of Don’s remaining paintings. Contact her for an appointment to view and purchase.

I knew Don when he was married to Janice. Jan is still a friend of mine. Don photographed me and Jan painted pics of me.. Don lived a long life and many people in Houston knew him and went to events held at his house during the early 70’s.

Ruth, interested in photogear Don left. Used to do some of your prints. Miss some of the breakfasts we shared.

Hi…I love Snell’s work.
Just diving into his legacy recently. I may have one of his pieces…a vibrant bayou depiction, in greens, blues, black. It’s signed D Snell. the patina / framing overall points to the era as well…40’s 50’s 60’s…?…
Questions are, did Snell paint bayous , marshlands? Who may I email/ text message a photo to you shed light on the painting .
Thank you!