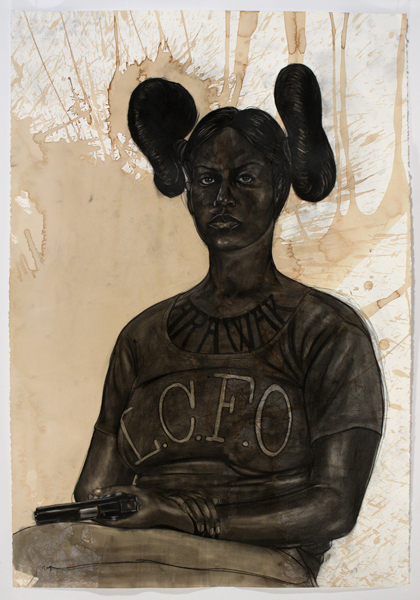 I was tempted to write about Robert Pruitt’s current show based on the photographs published on Hooks-Epstein gallery‘s website. Time was short (the show ends Saturday), and I felt that I couldn’t let a show by an important Houston artist like Pruitt pass by unnoted on Glasstire. I was probably safe: Pruitt’s drawings were a highlight of the Houston Fine Art Fair last September and the gallery kindly published high-quality images of every piece in the show. 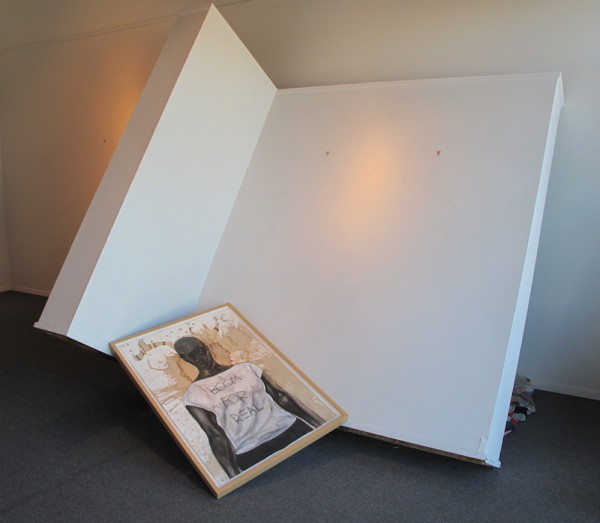 Installation view with Woman Having a Revolutionary Thought

I was right—the new drawings are much like those I had seen at the fair in size and execution. But you should never venture opinions of things you haven’t seen and Pruitt’s First Contact shows why. When I got to the gallery, at first glance I thought there had been a disaster—walls thrown down, drawings skewed and leaning. A homeless man with a fondness for Marvel Universe magazine had encamped under a section of overturned wall. 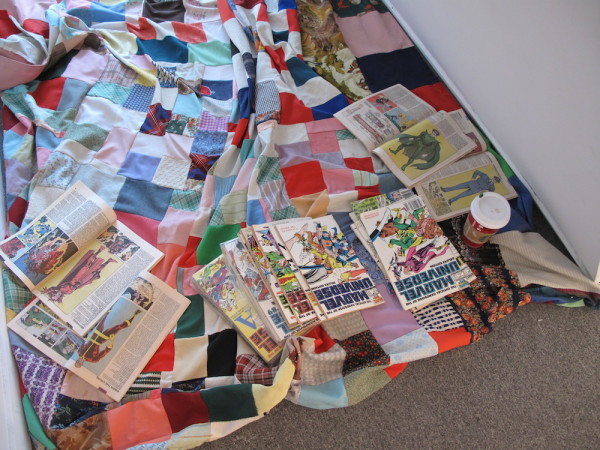 Just a few feet into the space, Pruitt’s topsy-turvy show resolves into a more conventional set of drawings and tableaux, but the vision of chaos that greets you at the door has done its trick: Pruitt strongly asserts his unwillingness to supply just another show of his popular drawings without imposing conditions. 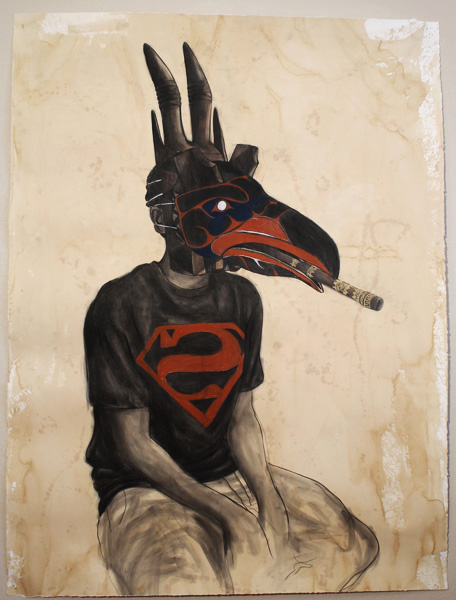 They’re good drawings, too: combining a satisfactory academic figuration with thought-provoking symbolism. The ever-present coffee-stained paper backgrounds are an affectation, but a useful one, softening drawings of  single, isolated figures that might seem too clinical against plain white paper.

Three drawings of powerful women guard the entrance to the show: Sentinel, as might be expected, has a stern watchful gaze, augmented by  supernaturally big Princess Leia hair buns like radar domes. Woman Having a Revolutionary Thought meets your eyes with arched-eyebrow challenge; in First Contact, Pruitt has perfectly captured the inward-listening look of a woman whose headgear is plugged into an enormous Mayan amulet. In contrast to the direct, confrontational female portraits, the only male figure in the show is masked: he sits, relaxed, half turned away, face hidden behind heavy wooden tribal masks piled on his face in layers. A tube, like an enormous joint or a pipe or a snorkel, supplies the young man under all that cultural baggage with breathing air. On his t-shirt is a Superman “S”, reversed, as if we were he, seeing ourselves in a mirror. 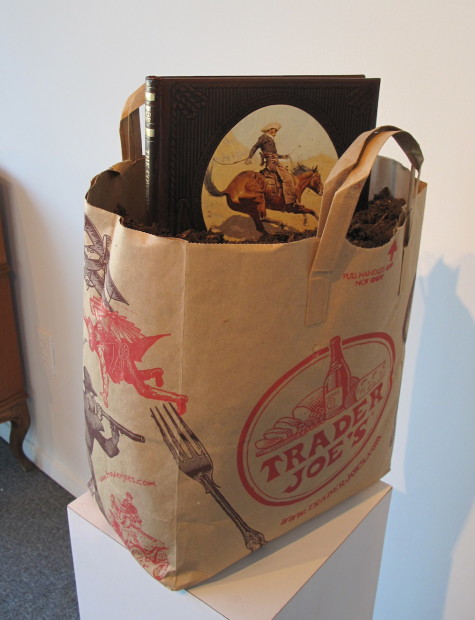 Terrax the Tamer is a brown paper grocery bag full of potting soil. Pictures on the bag (from Trader Joe’s) feature images of 19th-century exploration: flying machines, the horseless carriage, and a military scout with a telescope. Planted in the bag is a book: The Cowboys, from the Time-Life library of the Old West, the deluxe edition with the fake tooled-leather cover. The piece serves as a reminder of the baseline, the commercialized story of westward expansion to which Pruitt seeks an alternative.

Pruitt’s show next leads viewers past the Sentinel (and her pistol) to In Flight, a stack of books on a pedestal. The uppermost book, Richard Wright’s Native Son, is open to the title page of book two: “FLIGHT.” A telescope stares at that one word with eye-popping intensity, its magnification powers vividly illustrating the mind-expanding exhilaration of new ideas. 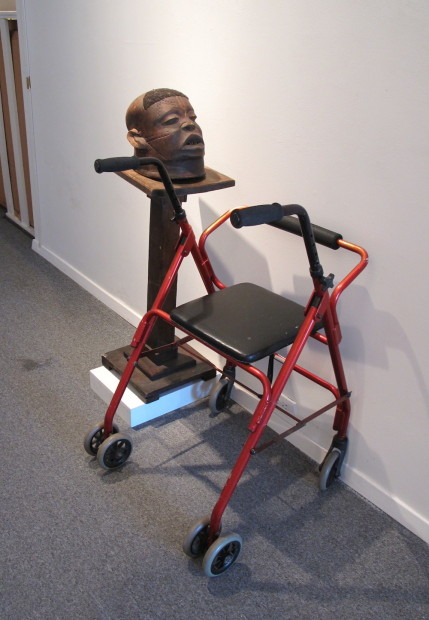 In the rearmost area of the gallery, Satellite Singer, across from the drawing of the masked young man, explicates Pruitt’s Afrofuturist vision. A squat African mask like a helmet sits on a wooden stand; a hidden speaker emits a continuous loop of vintage space and rocket propaganda. An incongruous, tinny voice that might as well be the young Ronald Reagan’s narrates an imaginary “first trip to the moon” with breathless mid-century optimism through the head’s thick features. The sound coming from the head is like an oracle, but it’s unclear whether the unlimited future it promises is coming, or has already passed us by. The other component of the piece is a wheeled walker, parked, empty, against the blank gallery wall.

Hurry! First Contact will be on view at Hooks-Epstein Gallery in Houston through January 11.

Your analysis of Terrax the Tamer is exactly what I thought, but I’m still puzzled about where the title of the piece fits in. Terrax the Tamer was an obscure Marvel Comics villain who could control rocks and earth (the dirt in the bag might be related…). That and the Handbook of the Marvel Universe (sort of a reference guide to Marvel comics characters published in the 80s–prime Marvel comics reading age for Pruitt, who was born in 75) are kind of interesting. It suggests Marvel Comics is important to Pruitt, but the connection is obscure. You could classify Pruitt’s use of Marvel Comics as a part of his “Afrofuturism,” but that doesn’t really explain why Marvel Comics is apparently so important to him.

Aren’t Marvel comics important to everyone? A lot of the show seems to be about becoming aware. The woman “plugged into” a Mayan sculpture, the kid’s telescope staring at a stack of eye-opening books . . . the comics under the overturned wall are part of a kind of clubhouse/hideout from the pressures and furies of the rest of the show. A cozy quilt, a cuppa coffee, and the Marvel Universe!