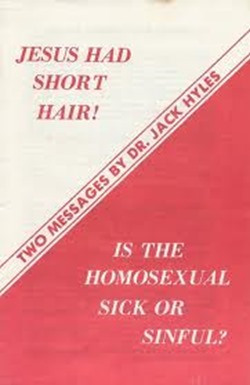 Are all long-haired people really gay, or is Phil Robertson a shame unto himself? Click and decide for yourself.

I’m glad Jesus wasn’t white, even though it’s hard for me to picture him not as an effeminate white man with a desert tan, long hair and a dark beard. (The Bible says in 1 Corinthians 11:14 that long hair on a man is a “shame,” which made me realize early on that our beliefs may not be quite straightened out.) The same goes for Santa Claus. The images I saw created the everlasting idea in my head of who these “characters” were supposed to be. When you’re young and impressionable, it’s hard to distinguish between what belief and historical accuracy or scientific fact signify. The two are incompatible most of the time. When I found out Santa Claus wasn’t real, I didn’t care who the real Saint Nicholas was—that is, until I got older and wondered what all this mess was really about. Things just are the way they are because that’s the way they were introduced. There’s a comfort in those images, because most of us (white protestants anyway) were taught that they were symbols of joy and comfort. (I am joyfully comfortable with penguins too, I’m just not sure how I would feel if they knew how naughty or nice I am, or when I am sleeping. Then they become a little scary. See below. I feel a South Park episode coming.)

It’s hard to maintain the same belief when you’re no longer looking at the same image to represent it, which explains the unease we may feel when our image of Jesus or Santa Claus is changed, or threatened with change. We can thank the magnificently strong ties between images and beliefs—something advertisers have known about for decades (artists for centuries or more). Perhaps we’ll never know how dark Jesus’ skin was or how long his hair was, or if Saint Nicholas descended purely from Nordic or Turkish roots. The point is—maintaining a belief system and a respect for historical and scientific facts make interesting bedfellows.

Oftentimes history and science are used to enhance the literature surrounding a faith, just as fables and parables of faith are used to explain the evolution of history and how things work. For most of us willing to ask, however, they don’t always connect that well. People look to all kinds of things to explain what and why certain things are happening—some more methodical, others more Methodist. That’s precisely the area in which Chris Sauter’s work dwells.

I first saw Sauter’s work in Mark and Angela Walley’s video of his installation The Whole World, where two landscapes just beyond what the eye can see are brought to life. Two sculptures—a microscope and a telescope—are formed from pieces cut out of opposite sides of a wall. The resulting holes, on the telescope side, look like a starry galaxy—on the microscope side, an amoebic specimen. It has to be one of the simplest and, dare I say, brilliant expressions of macro/micro I’ve ever seen. Two instruments that simultaneously limit and expand our vision are created out of the blankness of the gallery space, inspiring just plain wonderful wonder. 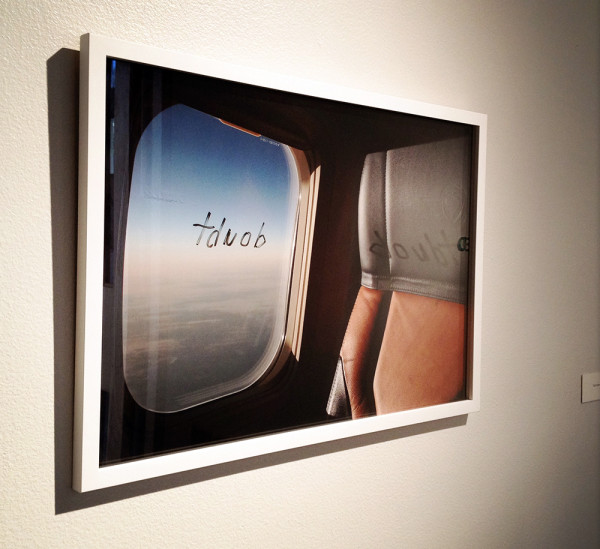 On view at Southwest School of Art, Doubt begins with a different sentiment. A color photograph shows the word written backwards on the inside of an airplane window. Its legible shadow projects across the seat, appropriately starting the discussion. How much belief was required to make flight possible? How much doubt had to be overcome? How much science was and is then required to be hurled through space at 500 mph, 15,000 feet in the sky, drinking a ginger ale? How many prayers are said by those with a fear of flying or experiencing turbulence? How many statistics are quoted to try and dispel that fear by noting that hundreds more die in car crashes every day? Why don’t those statistics and historical facts ever help? 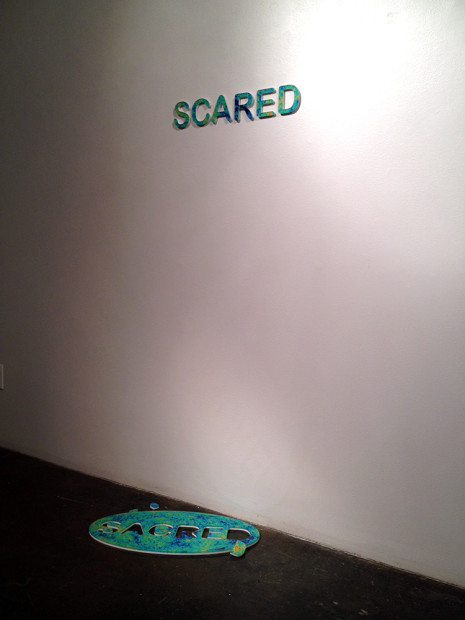 Which brings us to this piece. Fear is powerful. (See Machiavelli, or watch Fox News.) Sauter has additively place the word “SCARED” on the wall, with its subtractive shell on the floor, spelling out “SACRED.” The word(s) are laser cut out of an acrylic mounted photograph of the cosmic background radiation of the universe, lingering from the Big Bang. I was reminded how fear lingers much like that radiation. Not just the primitive fear that keeps us safe from predators and weather, but a more advanced fear—of the unknown past our own comfort, past death—begetting volumes upon volumes of reflective poetry and art, parables and miracles, along with temples of worship, circles of magic, altars of salvation—you know what I mean. Entire institutions and even civilizations are built upon it. Fear of God (or Gods, for you polytheists out there) is supposed to keep us in line. Being scared is almost a straight line to the idea of sacred, one literally being carved out and assembled from the other (like Eve from Adam, right?). 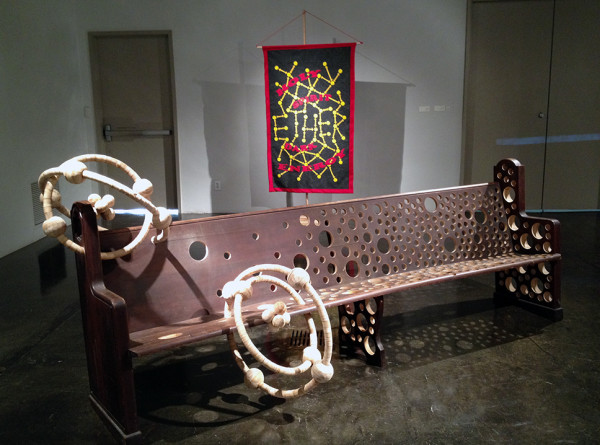 All of the objects and assemblages in the show in some sense point to the interdependency of science and religion—like this handsome wooden pew where atomic models are carved out and assembled from it, then attached to intersect it. Science tells us the wooden bench (where many sing, pray and tithe to the almighty) is full of vibrating particles too small to see, forming fields of mass and energy. I’m sure God made atomic particles too. Why wasn’t that mentioned? Maybe it was. Adam sounds a lot like atom. Is there a secret code in the Bible? Could morality and science be compatible? Dark energy sounds pretty devilish. Turns out we just don’t know much about dark energy or dark matter, so we call it dark. 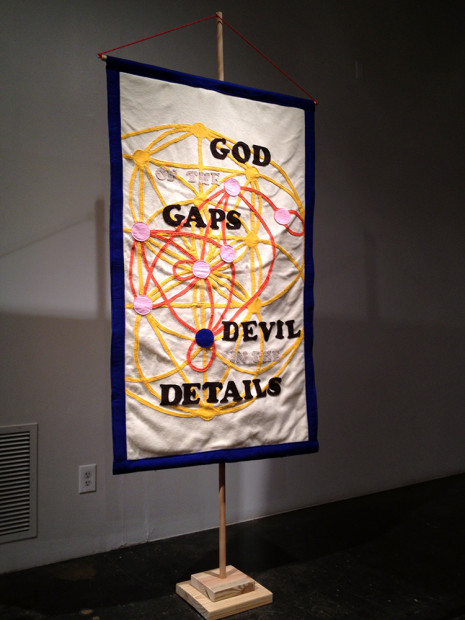 People don’t trust technology because they mostly don’t understand it. Or they fear it will be used for evil purposes. A similar situation occurs with religion, though many—when the limits of understanding have been reached—turn to faith. This piece is one of several felt banners hanging in the space that are familiar to those of us growing up going to church. They usually decreed a Bible verse while simultaneously serving as decorative accent. Sauter employs them similarly but with conjoined phrases like “Holy Ghost in the Machine” or “God of the Gaps, Devil in the Details,” pairing proper doctrine with pop/folk language in heavier or lighter terms, depending on your disposition. 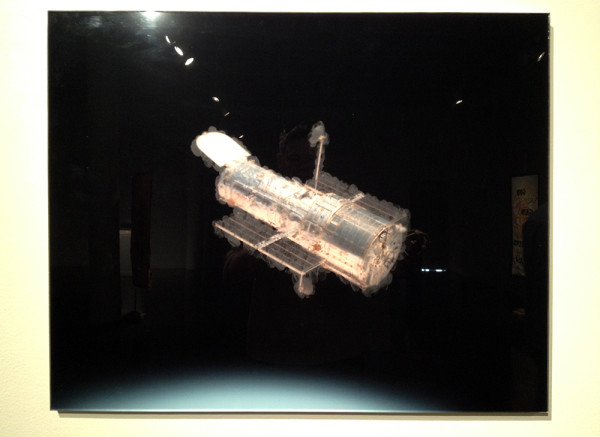 The Hubble space telescope gave humanity probably the most profound image to be recorded in human history so far—the Hubble Deep Field, which shows us that the vast blackness of space not only contains billions of stars, but billions of galaxies. There’s enough to talk about in that one image for an entire academic year or more. Sauter deals with Hubble quite a bit, starting with Soft Focus—a photograph of that amazing space telescope, floating in isolation but slightly blurred. As the details become more defined, the blur is created purposely, with fingerprints. As that advanced piece of technology peers deep into the secrets of the cosmos, giving us perhaps the clearest image of the outermost cavern of space, Sauter makes note that human affect and its tendency to muddy the waters are evermore present—blurring the clarity of what we are being shown—expanding yet limiting our vision once again. 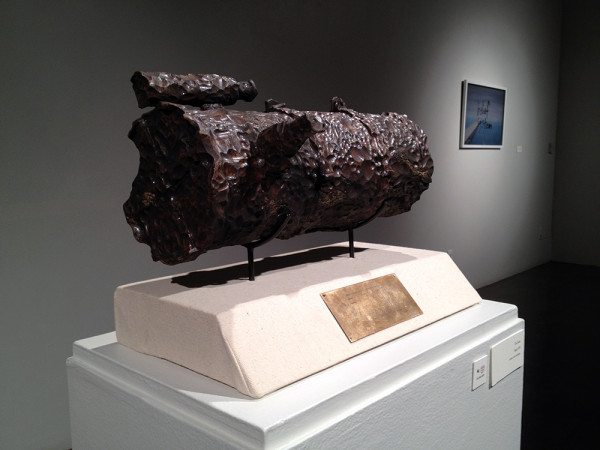 Cleverly titled Impact, this piece, though it resembles petrified space junk dug up from an archaeological expedition, is a ceramic sculpture recently formed with modern hands. I love the question of whether telescopes are as advanced as ancient pyramids or if the thousands of other strange artifacts found really are what we think they are. What will future generations (if any) say about what’s left behind thousands of years from now? They will surely provide clues to those searching, but I have a feeling they will also serve to confirm the inclined belief structure of the future as much as illuminate facts about the past. Call it a hunch. 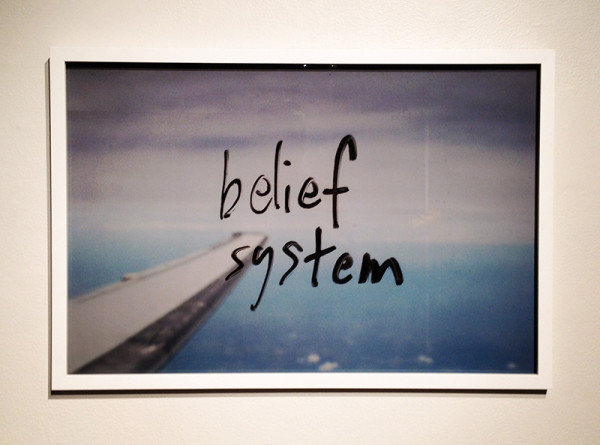 Facts continue to evolve. They bend and sometimes break. An apple still falls from a tree, of course, but our geo- and helio- and anglo-centrist attitudes toward that fact continue to decentralize. Discussions about multiverses instead of the universe are happening. That primitive description of creation—The Big Bang—may have been just one trumpet blow in a much larger orchestra. Jesus wasn’t white. Santa Claus is only intangibly real even though he is said to bring children tangible things. The bottom line is, we really don’t know much about the shit we believe in—whether it’s really supported by all the facts or not.

Sauter’s point is that it may not matter. Even if there is a tendency to view science and religion as a dichotomous problem (I doubt, therefore I must a) prove or b) believe), Sauter isn’t satisfied with that choice. Sauter’s Doubt rejects that binary relationship by making the gallery space itself a kind of holy lab, allowing belief and disbelief to intermingle. The two ideas become appendages fused to the same body, with a bit of playfulness to the whole thing. Not the first artist to do such a thing, sure, but Sauter updates the book—presenting hopeful discoveries in spite of the dysfunctions present in our belief systems. 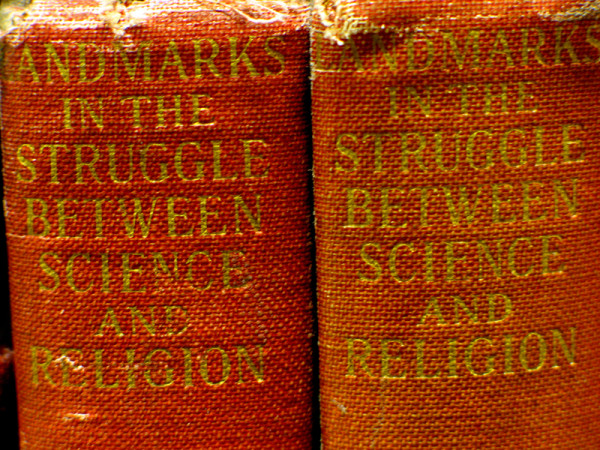 A picture I took way too long ago, at the University of Iowa library.

Predisposition and absolutism are fierce, but each one of us, when it comes down to it, prefer our own concoction of faith and fact. Sauter plays witness to the elemental feelings of doubt and fear that prompt us to seek answers—but more importantly—comfort. Answers may be what we say we’re after, but I think it’s mostly the comfort from certain answers we seek. I found comfort in Sauter’s non-denominational medley, observing it all interact together, knowing the answers aren’t that cut and dried. Which is why we don’t normally agree on them. Comfort is subjective, just like doubt. The answers don’t always add up. They are bound to make someone uncomfortable.