Hauntology may be a thing of the past, but this of course means that it will always be with us. —Mark Pilkington

Derrida may haunt your dreams, but he doesn’t haunt mine. —Maynard G. Krebs

My advice: just walk through the wall of text that may be seen to enclose Ivor Shearer’s Shooting The Road now on view at San Antonio’s ArtPace and turn to find yourself waking in a heap. You’re still alive. Neither killed nor eaten. Slowly stir, regather your molecules and look around. 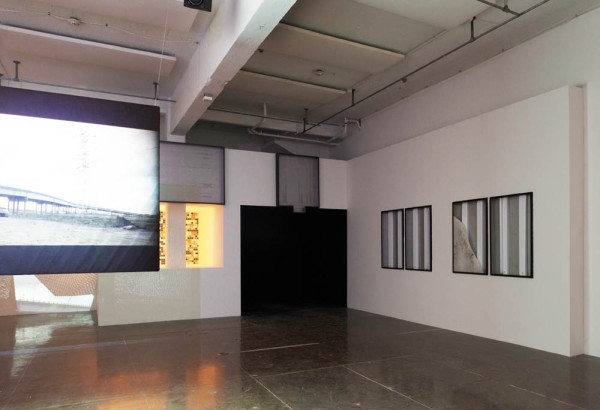 The artist has built a tidy and restrained, but nonetheless convincing, recreation of a ruined cinema lobby, that of The Grand theater in New Orleans, which was destroyed by hurricane Katrina in August, 2005. The theater had been added just a few years before the hurricane to the Plaza Shopping Center in an effort to slow the centers’ decade-long decline. It was abandoned by the owners along with the rest of the wrecked shopping center, adding a blight to the already declining eastern New Orleans neighborhood of Lake Forest, where it apparently still stands. This is the haunted forest of fairy tale, but it is real, an apocalypse of neglect, mismanagement and corruption—all among the “conditions being examined” by Shearer’s work.

The Road, directed by John Hillcoat, is one of many failed or only partially successful attempts to bring Cormac McCarthy’s storytelling to the screen (the two exceptions being No Country For Old Men and The Sunset Limited). It was filmed in 2008, released in 2009 and used The Grand and other devastated sites for location shooting. The Road bears only some resemblance to the thoughtful rumination of McCarthy’s 2006 novel, instead too often going for your typical end-times grime. There are even a couple of scenes that are indistinguishable from The Walking Dead.

Shearer’s Shooting The Road, on the other hand, declines that gritty texture and undermines the usual rationale of apocalyptic fantasy—that these stories of social breakdown are a metaphor for the times we live in and provide a necessary release of social pressure. The point Shearer’s work makes is that escapism functions as a means of social control, allowing those in power to create their own protected zone because everybody else is, well, busy. In this model, the apocalypse is real and already happening but, like the growth of a blade of grass, cannot be observed. We are just too in love with distraction. Even for watching the grass grow.

Shearer’s film utilizes an ingenious device, that of filming various locations that were used in the Hillcoat movie, but as they appeared when Shearer shot the footage in 2012 and 2013. Camera angles and movement, framing, film stock and duration of shots were replicated. Each of the locations is accompanied by the correspondent audio from The Road, which is comprised of music, dialogue between a man and his son and the father’s voice-over narration. Text in the leader of the Shearer’s film explains, “The original film made use of real sites of disaster for set design in order to construct an escapist post-apocalyptic fantasy world.” By contrast, Shooting The Road empties the frame of fantasy—the words of the now-missing characters can be heard to haunt the scene, but there is no mistaking this for a ghost story. It has quite the opposite effect—you don’t need a haunted mansion to feel the melancholy. You are left with that which cannot be escaped. And it follows you out the door.

The monologues and dialogues in the audio clips range from mundane to sublime, at times accompanied by plaintive piano, strings and oboe, bouts of coughing, the wheels of a grocery cart, the crackling of a fire, or a Coke can being kicked. These audio bits end abruptly when the scenes change, including, at the end of the six minute total run time, when the father’s voice is heard to say, “It’s when you start to dream about good things you should worry.” This audio sequence occurs near the end of the The Road and also sounds like an ending in Shooting The Road and thus closes the gap between them—at this point the original story and its specter are joined in a narrative convention.

Most of the location sites seem similar to their appearance in The Road, with the decay intact, but one scene has some special characteristics because the building in the earlier movie has since been razed. The boy’s disembodied voice calls out to another boy previously observed peeking out a now-missing window. The second boy is doubly concealed: he is hiding in the absence of a building. The camera swings about wildly, following the action that is no longer seen, in a setting that is no longer there. What now appears to be a normal day unfolds as one invisible boy calls out to another in a vacant lot in the middle of a residential neighborhood with cars passing obliviously in the background. “He’s right there,” the boy is heard to say, pointing at nothing from nowhere. His voice comes from a hypothetical “here” pointing “there” into an empty scene. But here shares a space with us, the viewers, while there is just uncanny emptiness. 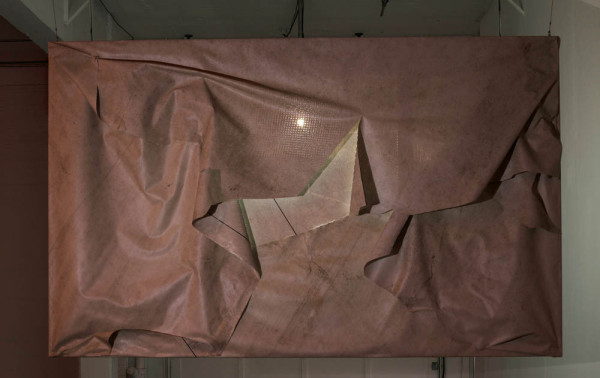 A couple of other films come to mind in the presence of this work: John Smith’s Blight (1994-96) and Jacob Kirkegaard’s AION (2006). Both for tone more than content, though all three of these films bear other similarities. But Shearer’s film is not a discrete work—it is a component along with the mock theater, an empty concession area, parted-out cinema poster light boxes, and the fake tunnel entrance to the screening auditoriums. The screen that Shooting The Road is shown on even has its own psychometric dimension—it is a remnant of one of The Grand’s screens removed by the artist via an entrance to the theater that is still open eight years after the hurricane. The tattered piece of screen is the only element of the installation that does not attempt to resemble the actual theater. It hangs haphazardly, folded back on itself on a rectangular frame, creating partial layers through which some image and text may be seen to project on the back wall of the space adding another stratum of interpretation for those who linger. 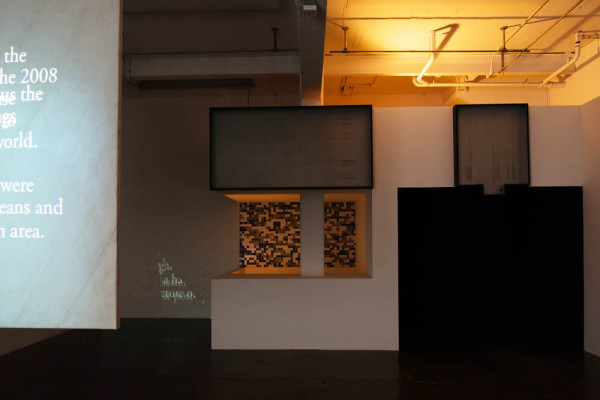 By the way, you can’t hang about Artpace after closing time, but The Grand in New Orleans is to some degree presently inhabited by people who squat or crash there. Online video evidence attests to this as the large clock that hangs above the concession always shows a different time (and I’m pretty sure the electricity ain’t on).

It was Gil Scott Heron that said “the revolution will not be televised.” I believe he was upriver from New Orleans when he said it. And it won’t be. Neither will be the apocalypse. These things take time.

Ivor Shearer’s Shooting the Road is on view at Artpace through January 12.