Nice Not Nice: Luc Tuymans at The Menil Collection 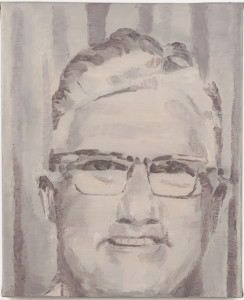 The opening line of this review should contain a disclaimer such as, “What you are about to read is not for the faint of heart, nor the faint of mind, or for anyone who has recently been plagued with severe depression or anxiety.” The exhibition is called Nice, but that’s exactly the conundrum—it’s not: even the philanthropic goodwill of the Menil’s founders is questioned. Don’t get me wrong; I commend and recommend this show for exactly this reason.

If you are in search of a show that gets a little gritty and echoes a profound darkness and pessimism, you have come to the right museum. Winter is nearing its official start soon, so what more appropriate time than now to bask in the bleak, gray-toned world of this complex artist?

Nice, on view at the Menil through January 5, 2014, is a show of 30 oil on canvas portrait paintings by the contemporary Belgian artist Luc Tuymans, born in 1958. If you Google him, you will find that he is classified as one of the world’s most important painters of modern life and memory, who reinvigorated figurative painting from its stale perception in the history of art. Tuymans depicts moments of atrocities in our history, from events associated with WWII, the Holocaust, and Belgium’s days of colonization in the Congo, among others.

The exhibition was curated by the Menil’s Director, Josef Helfenstein, the Menil’s curator of modern/contemporary art, Toby Kamps, and Tuymans himself, who is usually highly instrumental in selecting his own works, titling shows, and installing. The paintings on exhibit date from 1990 to 2012. Twenty-five portraits, masks, carved heads, funerary images, devotional figures and abstract paintings from the Menil’s permanent collection accompany Tuymans’ paintings, ranging from early encaustic mummy portraits to Ad Reinhardt’s black cross painting from the late 1960s. The

Menil’s works are placed in specific dialogue with the Tuymans works to accentuate their messages/meanings. 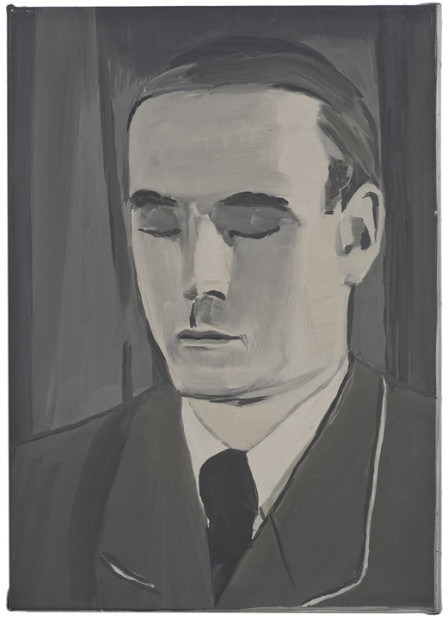 The portrait paintings selected for this show are not portraits of your grandmother or grandfather, but rather represent some of history’s most esteemed and, at times, controversial leaders such as Condoleezza Rice in Secretary of State and Nazi architect, Albert Speer in the painting Secrets.

I’m going to comment on some of the nuances that lingered in the exhibition as I wandered from gallery to gallery. I read the catalog essays and gallery materials prior to visiting, which in my opinion is a must, since many of the historical figures represented by Tuymans were unfamiliar to me. Or you can see the show and be completely confused throughout and read later. 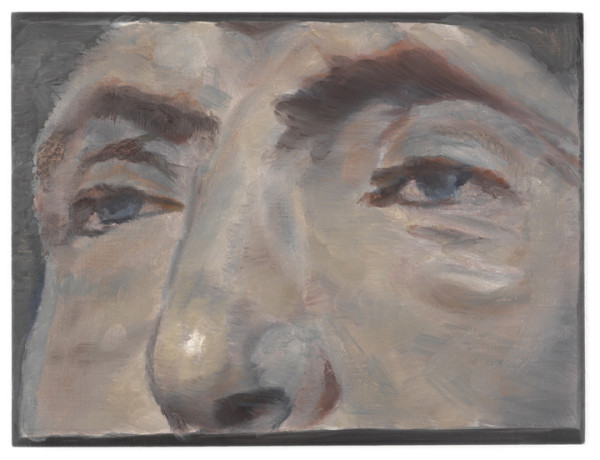 What are we really seeing when we come to Nice? The answer is twofold. First, we see the environment, the exterior view the Menil fabricated to enhance the paintings’ overall amnesiac feel. The quiet, soft mood of the natural lighting gives a feeling of being enveloped in a mausoleum. It is a somber, contemplative space much like the nearby Rothko Chapel, Tuymans’ pale and washed-out color palette of greens, yellows, blues, and grays barely surfaces from the vast soft white walls.

After confronting the environment, we meet the internal, the paintings themselves, literally veiled with cloudiness and unease that allow for a multivalent reading. As the artist comments, “Violence is the only structure underlying my work.” 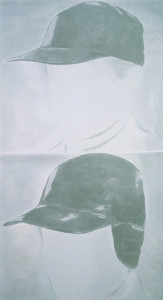 This cloudiness is most pronounced in Evidence, Self Portrait, Iphone, Himmler and Rumour, where it prevents us identifying or orienting ourselves with the subject. In Secrets and Head, the eyes of the figures are completely closed; in A Flemish Intellectual and Heritage I, the heads are completely removed, leaving only eyeglasses, hair and hats. Tuymans’ selection of figures with eyeglasses creates a division or wall between subject and viewer. Tuymans, in a gallery talk in September, noted that he strips out the psychology of portraiture and creates a shell that is devoid of any emotional connectivity with the observer. The cold, rawness of this show is highlighted even further by the unfinished edges on many of the artist’s canvases leaving the nails exposed. The works are unframed and primitive in their presentation.

I am intrigued by Tuymans’ work and the Menil environment was relevant and top notch as usual, but the incorporation of ancient and modern works from the permanent collection with Tuymans is distracting. It reeks of forced ideology, a weak and rudimentary curatorial lesson to Menil visitors.

By contrast, Byzantine Things in the World, a previous exhibition this year at the Menil, successfully used this same type of dialogue between Byzantine religious icons and modern and contemporary works to created new insight and an unusual interplay between works, thus revealing a refreshed view on things we thought we knew or typically take for granted.

Tuymans’ paintings are so complex and visually exhausting that we need only them to do the show justice. In fact, I was bothered that ethnographic masks were sitting pristinely nearby only to echo in my head, “Yes, they do this in other cultures. Yes, this is a mask. Look at how they parallel one another.” 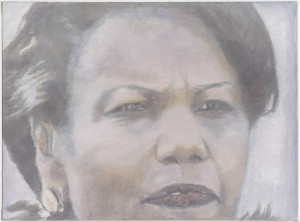 Nice is nice in many ways and not so much in a lot of others. If you are unfamiliar with Tuymans, this is an outstanding exhibition to introduce yourself to his work and his cynical personality and world view. This show will leave you perplexed about our world, painting, the Menil, the Menil’s founders John and Dominique de Menil, the artist himself, yourself, and what Nice is really telling us.

After all, Tuymans comments, “The Menil is in sharp contrast with the reality around it. It is a kind of theme park where race, cultural difference, gender come together under one roof…. Nice, which itself is an image with tremendous meaning and also non-meaning, is meant to be an extreme reality check.”

Luc Tuymans: Nice is on view at the Menil Collection in Houston through January  5, 2014

A version of this article originally appeared in Issue, a publication of the Art Studio, Inc of Beaumont.

All quotes taken from the Nice brochure essay adapted from Toby Kamps’s text in the show’s catalog.

“Nice” is Not Nice: Luc Tuymans’ exhibit at Menil