John Adelman: One of Two at Holly Johnson Gallery

John Adelman follows the rules. Rules prescribe the subject for each of his drawings. Precise and odd, they dominate every mark. 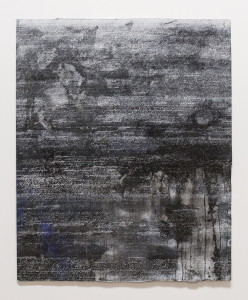 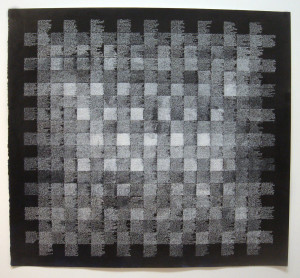 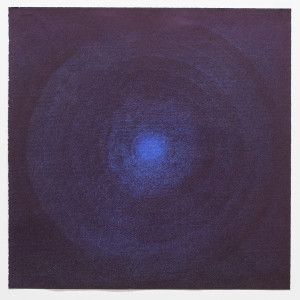 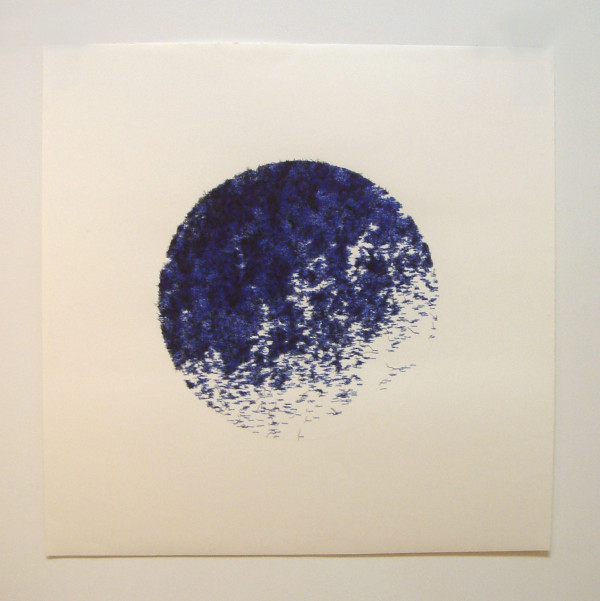 Here are the rules for the drawing above, titled 20,122 stitches: 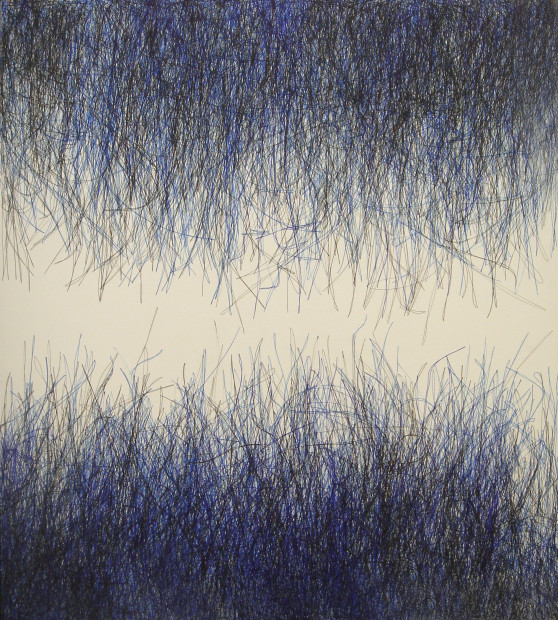 And here are the rules for the above drawing, titled 8,960:

Electrical wire traced colored and numbered traced as determined by letter. Each letter’s numerical counterpart=number of wires traced if that number was even=blue, odd=black.

The rules suggest a logical pattern, but finding purchase isn’t easy. Strange openings appear in the track. But lacunae are the pleasures of these rules—there’s delight in clicking off their mysteries. For instance, what formula delivers an embroidered wall hanging? Ought it to be inherited, bartered for—should you swipe it? What code is it that assigns a letter to a wire, and what is the code’s significance in a scheme that ultimately comes down to even numbers in blue, odd numbers in black? I think wonder is the point. After all, the natural pattern of material object, mental image, and language seems like it ought to be a track of simple truths but, of course, it never is. 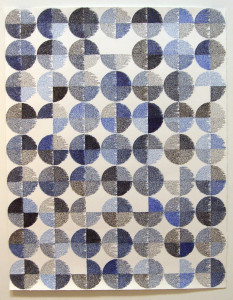 I can’t answer the differences in John Adelman’s rules, but I can give you a good anecdote about the artist. First, it’s important to know that he often uses a dictionary for source material. He moves through the dictionary word by word, employing words and the fullness of their definitions in his art. In a drawing like Exchange, a handwritten definition makes the line and rules make the pattern, including when to use black gel ink and when to use blue.

Adelman used one dictionary, a 1989 Webster’s edition, straight through to the word “half.” Then Hurricane Ike took it away. The wind and rain that undid so much in Galveston Bay brought only a single sustained leak to Adelman’s Houston studio. That leak was directly above his dictionary.

Somehow, his dictionary was the only thing damaged. 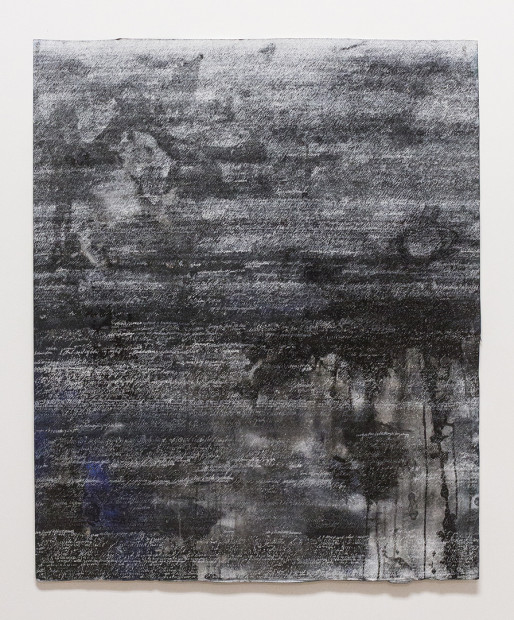 It’s pretty to think about what would have happened had the dictionary not gotten swamped. Adelman is prolific enough, he probably would have gotten through it. And then there would be all these works of art out of a single scientific document. In this age of online sales, he could have found another 1989 edition. He could then just take up where he left off. But finding a replacement would somehow fall out of the formula—it would screw up the rules. Instead, Adelman started from A in a different dictionary, this one a 1979 Webster’s edition. He’s still young enough to get all the way through it—compulsive enough, too.

Why a dictionary for source material and not a book of poems? One reason might be that poetry is kinetic language. A word in poetry gives off a radiating haze of connotations. Whereas a dictionary, as I mentioned, is a scientific document. It is a catalog with rules. Words are given precise definitions.

And yet, there is something quite poetic about Adelman’s drawings and his methods for making them. Although the dictionary is his chief source, I notice the capacity  of his art work to point to more ethereal constructs. I asked him about this and other aspects of his project. What follows is a brief interview conducted by email.

RB: Often your rules have at a scientific quality in that they present a sort of causal chain—one step creates the situation for the next step and so on until a pattern is fulfilled. But there is also something irrational about your rules, as though they follow the logic in a dream—specific but strange sequences that are not quite understandable. Do you ever have task-specific dreams? Does dreaming ever inform the way you look at patterns in your work?

JA: Not sure I fully understand the question. The rules/formulae are causal, a series of if…then statements. The logic is my own, so in instances it does not translate verbatim to the viewer and that’s OK and allows the viewer to understand the work on their own terms. In regards dreams, there have been viewers who place the work in the Surrealistic camp, (others, Pop, Minimalism, Conceptualism et al.) and again, if that is a method for that viewer to partake in the work, all the better. However, for me dreams play no role. The formulae stem from an understanding of art and the world on my own terms. It took me quite a long time to determine how differently I see everything in the world—whether it’s politics, society, religion, even the way in which I learn, and of course, art. I don’t hide from that difference, but embrace and maximize it.  This is another level, if the viewer be willing, to come to terms with work, which I understand demands much of the viewer.

RB: 20,122 stitches has the look of a visionary moonrise. Carry suggests to me an otherworldly fabric. Do you ever consider a realm of the fantastic? Do you think there is a point in your work where the world of rules goes away and another sort of world appears? Or is your emphasis always on the rules and a reality made from these rules?

JA: The emphasis is always the rules.  Every square inch of every work ever created needs to make sense to me especially the underlying structure on which the image is constructed. Some viewers do relate to the work in a chaos or string theory manner but science and mathematics, like dreams, do not enter my thought processes. As for fabric, my sister Amie is a fiber artist and creates inspired work through color and design. So design is in my DNA. Design, for me, is an established rule system on which  to employ my rules. Carry is a system of doubling numbers that seamlessly came together. Stitch is the dismantling and re-configuring of a three dimensional object into a new two dimensional reality. I am a formalist or structure-oriented artist and narrative has never been exercised in the work.

RB: What about accidents? What sorts of accidents are permissible in your work what sorts do you not tolerate? I’m thinking of the rain from Hurricane Ike that ruined your dictionary, how this is a type of accident you do not tolerate. Because rather than take up at the same point with a different dictionary, you started your project over. On the other hand, the accident within the rules of Exchange that results in blank spaces in some of the circles seems like a type of accident you not only tolerate but willingly support.

JA: The dictionary after Ike had to be thrown away, it was literally fuzzy in black and white mold and having such a hazardous object in the studio did not seem advisable, although in its fuzziness it was pretty cool to look at. The only real option was to obtain a new one. I debated with myself on picking up where I left off but I determined (and was proven correct over time) to restart the project (there was an initial set of rules on which dictionary to obtain). So I again applied those rules and came up with a very different dictionary. Accidents if they happen during the process of making the work, like dropping the pen and making a mark where I had planned on keeping a place unmarked or throwing new material on the drawing and it dragging the undried ink with it as it rolls, are acceptable, they are part of the implementation of the rules. I cannot think of a big mistake otherwise, except a while back I was working on a piece and a person came to my studio and somehow my marker for where I had left off had gotten moved when it was determined the exact location could not be located, I had to end the piece. So I do deal with unsuspected variables, but it’s exceedingly rare. Exchange’s empty spots are not accidents but part of the formula; I was to make 5 passes over the entire surface (Exchange, first letter E, E=5). I determined that before starting and it was unknown how many, if any, portions would remain blank, while, in Fluid, the predetermined rule was to cover every portion at least once and it was unknown how many layers certain pieces got—I think the most was around 16. 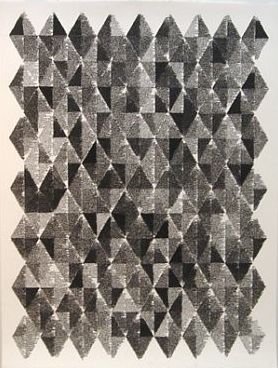 RB: You mention that it took quite a long time to determine how differently you see everything and realize the benefits of such difference. Does your decision to enroll in an MFA program some ten years after you achieved a BFA describe in any way the realization that you came to? I’m interested to know whether graduate work was somehow a shaping experience for you. Or was the MFA a professional decision, a way to move into teaching?

JA: The MFA did have some beneficial effects, primarily it afforded me the time and a place to focus on the work for a solid uninterrupted 3 years in a highly charged environment.  The coming to grips with who I am was a series of numerous events starting after the BFA and continues as I find myself in new situations. Teaching is a sideline activity, with my style as different as my work, that allows students a whole new educational environment. But the MFA was a professional decision to get in the field that I belonged and out of the factory, which was suggested by my sister, Amie. The MFA gives an instant legitimacy to the graduate. (End interview)

That word “legitimacy” is an interesting choice. Sappho wrote, “Although they are only breath, words which I command are immortal.” So much of what she wrote is lost to history and all we have of her are lyrical fragments. In Sappho’s case, the eternal dwells in what is broken. It is only a special few artists that have the aptness of their work preserved by mystery and loss. The rational course is to hedge one’s bets by keeping within practicable boundaries of form and content—art is for the eye, the mind, and the CV, too.

I don’t suggest John Adelman falls into too neat an assumption like that one in the last sentence. The stress on the word “legitimacy” falls a certain way for him. An artist who spends thirty hours undoing a work of embroidery to its stitches and then countless hours tracing and labeling those stitches will want the viewer to know that this is not compulsiveness on display, but rather it is a serious offering to the culture. For my part, I see the value and feel the delight. Although Adelman prefers scientific language, the language in his drawings works poetically in the sense that it allows us to find, in Wallace Stevens’ phrase, “ghostlier demarcations,” which are lines or borders between mind and world. It is this ghostliness that inspirits Adelman’s precision with thoughtfulness and wonder.

“John Adelman: Two of Two” is currently on display in Houston’s Nicole Longnecker Gallery, 2625 Colquitt St., Houston, TX 77098 through January 11. We also are having an artist’s talk with John this Thursday, the 19 at 5:30pm.