The apartment gallery is to the critic as the firefly is to the concerned biologist. While both appear as little more than pleasant curiosities to the untrained eye, to the professional the species is a sign of a healthy ecosystem and of an appropriately low level of excess light, noise, and air pollution. Both are signs of exciting growth and vital balance. It is with this knowledge that many of us lament the passing of an Austin original that will light up 49th street no more.

XO the last show to be exhibited at Red Space and much credit must be given to curator Caitlin G. McCollom and artist Aaron Meyers for producing a sharp and thought-provoking exhibition. 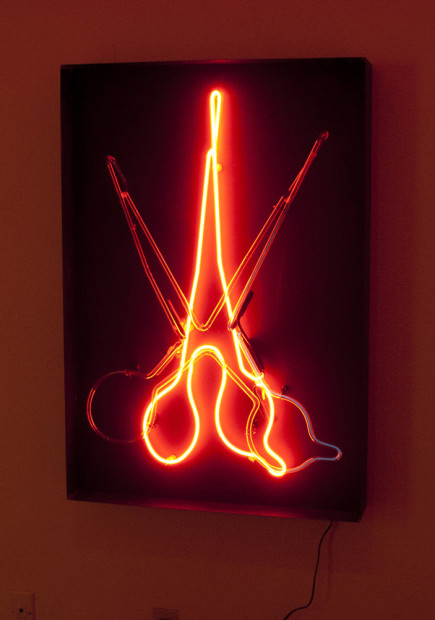 The work is not site-specific per se, but the most compelling interpretation of the work relates to the space, or rather, its future absence. Viewers entering the gallery are washed in alternating blue and red light from a familiar oversized neon barber’s sign—scissors open (blue), scissors closed (red). Lying across the floor, on the diagonal, rests a roughly welded girder. It is composed of four square lengths of steel bridged by shorter segments. The light from the neon sign casts deep dancing shadows of the minimal sculpture on the floor. On the opposite wall is a framed flight pamphlet that looks as though it came straight out of the seat pocket of a 1960s passenger jet. After these three works I admit that I was quite confused and was having a hard time bridging the gaps. I was about to file the whole show in the “aesthetically-interesting-but-conceptually-muddy” folder, when I spied another piece of the puzzle: a two-handled (yes, two-handled) dust pan left resting, as though discarded or left by accident in a hurried pre-opening sweep. The otherwise simple pan has a melancholic anthropomorphism—one handle slightly bends upward as though leaning or caressing the apartment-grade molding that clads the base of the walls. My bewilderment is now spiked with humor. I start to see the connections. Curious to see if they were intended, I spot what looks like an artist statement. What I find is something else. 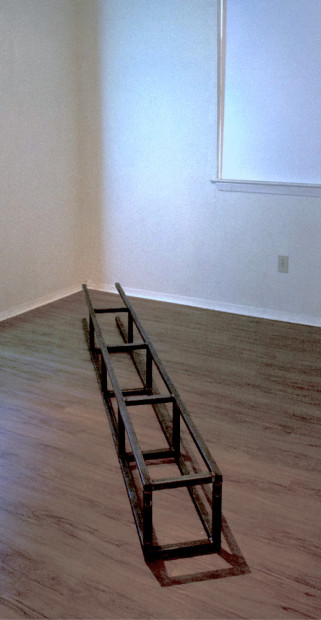 Pinned to the doorframe is a necessary, but unfortunately pedantic text. It begins by relating the history of the Brooklyn Bridge under the heading Phosphorus. The next heading is Hesperus, followed by an explanation of the Mario’s Beauty Salon sign from Cesar Chavez St. in Austin. Under the final heading, Venus, the reader is reminded that the Greeks had two names for that celestial body: one for the evening star (Phosphorus), and one for the morning (Hesperus). 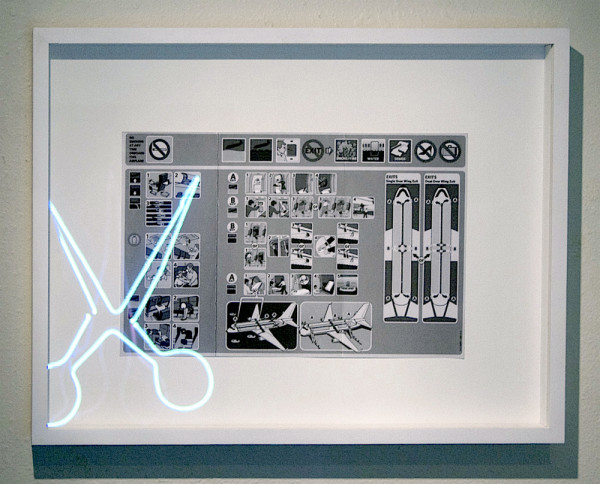 Red Space curator Caitlin G. McCollom and her partner Carlos Acevedo are leaving their home and gallery to head to New York at the end of December. With that bit of knowledge it is possible to view the exhibition as a sort of priming, as an intellectual bridge to their future lives. The artist has created a liminal ritual, a rite of passage, and a way of progressing to the next stage—something that is rare (and in my view lacking) from urban life. He has gathered together symbols of moving, domestic unity, travel, severance, Austin, and New York, and has created a near spiritual space in which the gallery is allowed to meaningfully close, where McCollom and her partner may move through the obstacles of relocation, and where the Red Space Community can give its passing the time and thought it deserves. 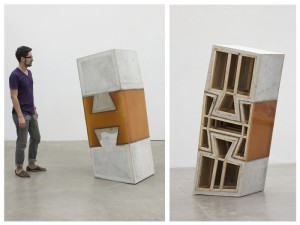 While Meyers’ work can be overly oblique and academic at times, it is pleasing to see him developing. Meyers is refining his art and crossing a certain bridge himself, moving from formalistic considerations of negative space, balance, and symmetry to the more deeply conceptual considerations of these same elements. Previously creating Rachel Whiteread- esque concrete sculptures that fill boxy voids, he has now found the negative space that is beyond the physical—in this case, the absence of a venue.

Just a year earlier, Meyers was producing works that toy with gravity and weight, such as Dovetail, pictured above. Now he’s interested in a different kind of balance and has created XO as a fulcrum between the cities of Austin and New York. In addition to the purely physical symmetry of his former practice, he has highlighted the temporal symmetry between past and present. Surprisingly, these heady considerations have done little to disrupt a prolific and consistent practice and so I look forward to what comes next from this young artist.

Meyers frequently references ‘chiasmus’ when referring to his own work, and while the use of the term itself may induce a justified eye roll, it is worth considering. Individually, each work shows a certain symmetry, and a point at which the two halves connect (scissors, dust pan, girder, plane), but there is also a greater chiasm at play. Meyers has invoked the presence of New York in Austin. He has conceptually bridged the two cities and, through the correct alchemical ordering of elements, has crafted an urban magic which permits the Austin art tribe to gift New York with Caitlin and Carlos and to wish them well. It is a magic necessary for a city and state that clings so tightly to its own.

This is a wake. We, as attendees, are here to celebrate and grieve, to watch the soul of the gallery (its curator) move on to the afterlife (New York), and bequeath the physical space back to its purely corporeal form. Apartment to apartment, dust to dust. The gallery and its curator’s handiwork will be missed, but I believe we will see McCollom again. Austin would be foolish not to invite her back as guest curator.

Red Space Gallery ceased operations as of December 1st, 2013, with the close of XO, which was on exhibition from November 16. The opening on November 23 was more fun than a box of frogs and you should have been there.

Austin Curator with Gallery to Become Artist with...