The Guggenheim Goes to El Paso: Not a Blockbuster but a Mini-Series 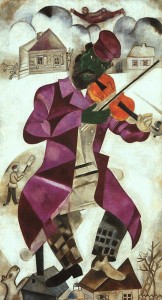 Tomorrow, the El Paso City Council is scheduled to vote on whether the city manager can sign off on the contract for “Guggenheim Masterpiece Exhibition Series,” a loan agreement between the city and the Guggenheim to bring a number of paintings to the El Paso Museum of Art. The El Paso Inc. reports that it is “the first such project for the Guggenheim.”

The “first such project” seems to be some sort of hybrid between a curated traveling show and individual loans for a homegrown exhibition. One or two works at a time will be on loan (for approximately four months each) to the museum beginning in October 2014. Through October 2016, the paintings will be presented under six subheadings: “Cubism and its Origins,” “Expressionism and Der Blaue Reiter,” “Orphism and the School of Paris,” “Marc Chagall,” “Vasily Kandinsky at the Bauhaus,” and “Pablo Picasso.”