Two parallel two-part exhibitions by Liam Gillick and Marianne Vitale inaugurated the fall season of The Contemporary Austin, formerly AMOA-Arthouse. Both artists are presenting work at both of the Contemporary’s two very distinct sites: the contemporary urban chic of the interiors of the Jones Center downtown and the lush grounds of the Mediterranean-style Laguna Gloria on the Colorado River. The two-site arrangement of the shows reinforces the new unitary identity of the institution.

The pairing of Gillick, the veteran of “relational art,” and Vitale, a rising star of the NYC gallery scene (according to Ken Johnson of the New York Times, within the current playing field she scores “a near-perfect 10”), is a strategic curatorial pick for the rebranded institution. It offers a balanced, inoffensive combination of critically sanctioned international art, in the work of Gillick, with an academically savvy nod toward Americana in the work of Vitale. The coupling of two artists who produce visually attractive, tasteful objects replete with references to both artistic discourses and popular culture is likely to please both highbrow connoisseurs and the so-called general public. This choice is as smart as it is risk-free, but there are, nonetheless, some notable improvements to how The Contemporary conceives of itself. 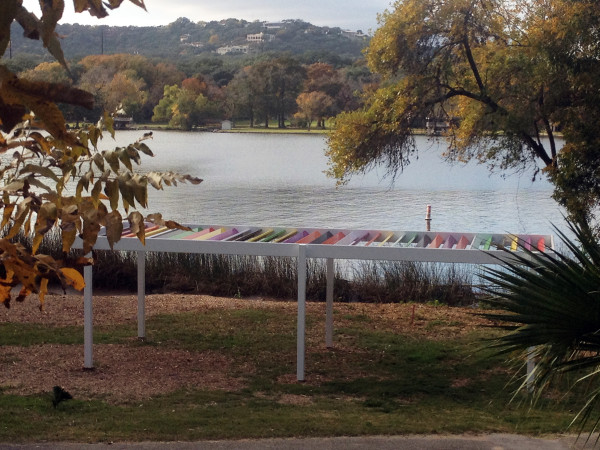 One of the best decisions by the new team of The Contemporary was to abandon the effort to mount exhibitions in the unforgiving ornate interior of the Driscoll Villa at Laguna Gloria and instead use the expansive, richly landscaped grounds of the estate. The placement of the outdoor installations by Gillick and Vitale encourages the visitor to explore the gardens. Gillick’s architectural structure, Raised Laguna Discussion Platform (Job #1073), sits at the bottom of the staircase descending from the Villa toward Lake Austin. Vitale’s sculptural installation, Common Crossings, occupies a small peninsula at the furthest end of the grounds. The walk through the property is a sensual feast—a perfect way to spend an afternoon. Don’t accept the golf-cart ride to the installations. 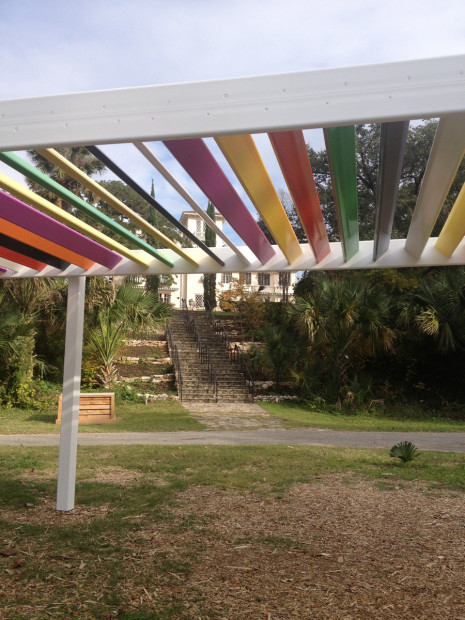 Gillick’s Raised Laguna Discussion Platform is a sort of a canopy that frames the view of the river. It is a variation on the artist’s other platforms, shelves, and cubes. Its material (powder-coated steel), simple geometry, and bold, limited color palette evoke both high modernist architecture and Minimalist sculpture—a dual reference that is commonly emphasized in writing on the artist. Because of its proportions and location the architectural quality of the Austin platform is especially prominent—it is reminiscent of the 1949 Glass House by Philip Johnson in New Canaan, Connecticut. The platform is also much less ambiguous than other works by Gillick, in which architectonics are stripped of functionality. Here, it functions as an amenity—a utilitarian structure that might shelter the visitor from the sun and allow her to comfortably gaze at the water. 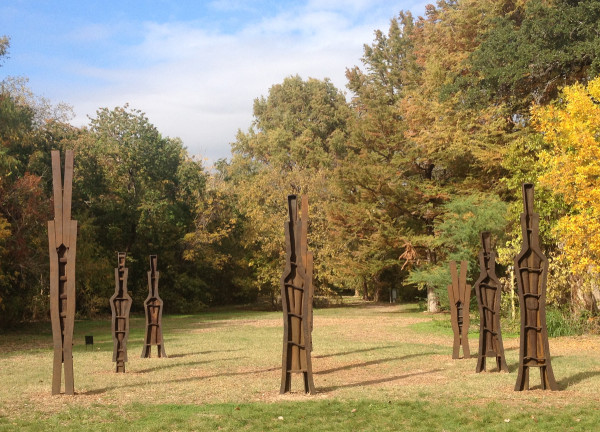 In contrast, Vitale has taken functional remnants of the railroad industry and turned them into monumental sculptures. Common Crossing literally refers to the crossing point of two rails—part of a railroad switch. Re-welded and staked upright into the ground, Vitale’s nine common crossings function as totemic poles, which command a clearing in the abundant growth, like ancient artifacts reclaimed from a jungle. A small plaque listing the author, title, and date identifies the work much like an archaeological site. One might read Vitale’s Common Crossings as a sort of archaeology of the future conducted in the present. However, if Common Crossings are monuments, the question is: monuments to what? 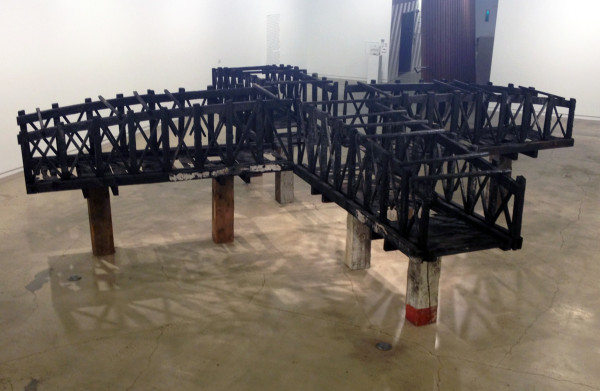 Vitale’s Burned Bridge Junction, a massive wooden sculpture that takes up the entire second-floor gallery at the Jones Center, might answer such a query. A gargantuan construction like two intersecting wooden train bridges forms a Greek cross. Spectacularly charred, the piece rests on eight wooden beams at about eye level. If the artist herself refuses to associate her sculptural constructions with the American West, the didactic material in the gallery doesn’t hesitate: the space is equipped with books on the history of the railroads and the U.S. westward expansion, and three audio head-sets with the surprisingly high-pitched recording of the sounds of trains.

Why the railroad? Are the railroads indeed vintage artifacts of American history, as their monumentalization seems to suggest? In Vitale’s sculptures the railroad provides raw material that is overwhelming in scale (Johnson aptly described it as “the ‘wow’ factor”) and has a legible reference to a beloved genre. The critics like Johnson who are tempted to relate Vitale to heroic male Minimalist artists, such as Richard Serra, are rather presumptuous. Vitale trades the antagonistic relationship to the viewer established by the threatening presence of Serra’s sculptures (remember Tilted Arc?) for the demand of a reverent admiration. Her constructions have a cool, spectacular detachment, laced with a well-known anecdote about the frontier, Manifest Destiny, and so on, but once the “wow” factor has worn off, I am left with questions without an answer. So what? 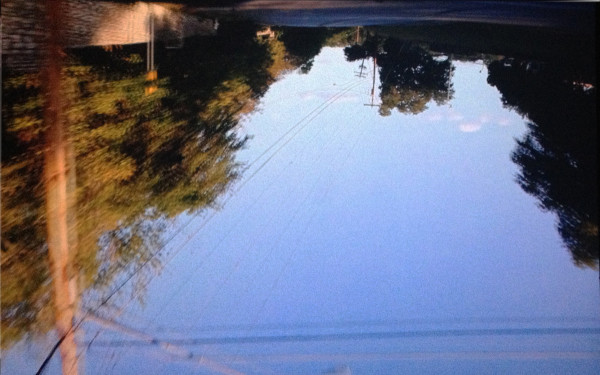 Seemingly much colder and devoid of metaphor, Gillick’s works are, in fact, more complex.  In the first-floor gallery of the Jones Center, Gillick shows a four-part video, Margin Time 2: The Heavenly Lagoon, filmed in Austin during his residency at The Contemporary in the spring of 2013. The film relays the Laguna Gloria site into the gallery downtown. Three parts depict views of the grounds of the estate and boaters on the Colorado River using alternating black-and-white and color footage. The fourth part captures, upside down, the trip from Laguna Gloria to the city center through the windshield of a driving car. Inverting the landscape posits the vast Texan sky as the equivalent and the extension of the lagoon.

The film is not a simple linkage between two sites of The Contemporary. A disjointed four-part soundtrack dislocates what might otherwise be familiar in the film. The first three soundtracks feature the hum of machines recorded at a microprocessor plant in Taiwan; an interview with the American artist Lawrence Weiner conducted for the seminal 1969 Conceptual Art exhibition When Attitudes Become Form, over-dubbed into French; and a cockpit recording of two pilots of a Boeing 737 doing final preparations before takeoff.  The final part, A – is for Animal, is another interview, this time with the French philosopher Gilles Deleuze from the television program L’Abécédaire de Gilles Deleuze. Not translated into English, it presents an enigma for a non-French-speaking audience, unless one reads Gillick’s statement that explains the gist of Deleuze’s talk. According to the artist, the film “is about the relation between objects, humans, territories and technologies. … it is a film about art—where it comes from and what constitutes production.”

The subtitle of Raised Laguna Discussion Platform: Job #1073 also alludes to the issue of artistic production. The platform and the film shown at The Contemporary are precisely a “job”—another in a long string of commissions by an artist with international cachet, with “the participation of the museum as well as local architects, engineers, and fabricators.” Gillick’s work seems to be a self-conscious commentary on his role as a contemporary “itinerant artist, ” as defined by Miwon Kwon in her book One Place After Another: Site-Specific Art and Locational Identity (2002, MIT Press). Such an artist works as a nomadic freelancer, “working on-call,” mobilized by various institutions of the cosmopolitan art circuit “to execute a work specifically configured for the framework provided by the institution.” As Kwon observed, it is the circulation of the figure of the artist and his or her projects through the art world’s publicity networks that validates the work, and the publicity itself becomes a new art commodity. I take Gillick’s laconic subtitle, Job #1073, as a wry acknowledgment of his role in this kind of an exchange.

By enlisting Gillick, The Contemporary positions itself on par with those institutions of the “cosmopolitan art world” that deal out value cards to its players, but it’s a competitive game, and a pleasant site is not sufficient to gain an upper hand. Laguna Gloria offers a very enjoyable outing both for Austinites and visitors to town, but to acquire meaning and value beyond local level, will depend on the complexity, not just formal, with which the curators reimagine their sites.

What Really Happens When Two Artists Shack Up