Visionary artist Cleveland Turner, known affectionately as The Flower Man, died in a hospice on Sunday morning, surrounded by friends. 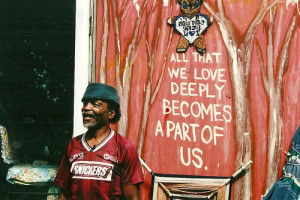 Turner was born in 1943 in a small farming community outside Jackson, Mississippi and, as a teenager, decided to make his way to California but never made it past Texas. After a 17-year battle with alcoholism, he was found near death in 1983 and taken to a hospital. Toward the end of his five-week stay, he had a dream that profoundly changed his life. “This big, pretty thing going around and around like a whirlwind, all colors, like in outer space, with people watching, all came to me in a vision,” he recounted in an essay by Alvia Wardlaw. He made a deal that, if God could help keep him sober, he would make a place where he could recreate that vision. Turner’s special talent for seeing the potential beauty and joy in others’ discarded junk was certainly an apt metaphor for his own transformation.

Turner rode around on his flower-filled bicycle, salvaging items to recycle and adorn his house—first on Sauer Street, then on Sampson Street. When fire and vandals destroyed his house in 2003, the community helped to relocate him to its current location on Francis Street, near Project Row Houses in Houston’s Third Ward. Although he got his name from being seen on his “Flower-cycle” and indeed grew flowers, his house was decked out with anything and everything—old toys, street signs, bones, car parts, doll heads—and it was always shifting and evolving. 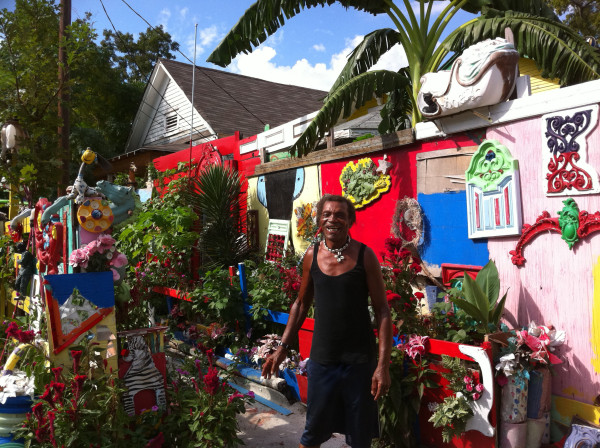 Turner loved greeting visitors (“just like heaven to me”), whose numbers increased over the years and came from everywhere, especially after being included as a featured stop in Roadside America. In 2009, he took his infectious smile and brightly colored art to the Contemporary Arts Museum Houston where he created a Flower Man House “outlet” on the front lawn of the museum in conjunction with the exhibition No Zoning: Artists Engage Houston.

Longtime friend and champion Susanne Theis, programming director of Discovery Green and former executive director at the Orange Show Center for Visionary Art, says she is “grateful for what he taught me about strength, beauty and purpose.” To get a sense of that purpose, watch the video below from an episode of American Dreamers in which Turner happily declares, “My vision’s come true. Yes sir, it come true. So I believe in those dreams and visions.”

Cleveland Turner contributed something to the Houston art community that can’t ever be replaced. Hopefully his house can be preserved somehow for future generations, although, of course, he himself was the art, and the house was merely a ‘wrapper’. We’ll miss you, Flower Man!

“All that we love deeply becomes a part of us” is a perfect sentiment from Flower Man and the best way for us to find comfort now that he is gone. He truly has become a part of us. Thank god Flower Man had that vision-it’s made Houston a brighter, happier, more colorful, and creative place. And Cleveland’s kindness to ALL of us will never be forgotten. He’s my hero and role model and I’ll be forever grateful for how he enriched my life.

Sarah, so sorry for your loss. Thank you for keeping us all updated the past few days. Please let us know about any services planned.

WOW! I’m shocked and saddened by this news today. I’m so grateful that I got spend some memorable moments with Mr. Cleveland. I remember last year when one of my friend’s came to visit from Dallas… he let us in and gave us a tour of his home and talked to us for hours. He made sure that my friend had something to walk away with to remember him by… What an artist, dreamer, believer, and visionary! U will be missed!!!

My heart is absolutely broken. To turn a corner and see Cleveland on that bike could make or remake your week. We would sit and chat until Cleveland would say, “Well, Imo have to see ya later I got some folks from Amsterdam coming by around two.” A tough loss a space that can’t be filled.

I never knew the flower man’s name until now. Everytime I would see that man on that bicycle, I would smile and say, it takes all kinds of people to make up the world