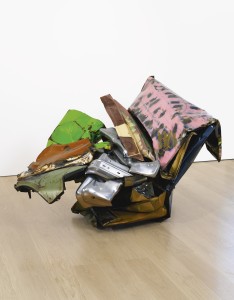 John Chamberlain, HURRAY FOR BERNIE GALVEZ (3 CENTS UNDER THE LIMIT), 1981.
Dia Art Foundation, to be sold to establish a fund for acquisitions

The founders of the Dia Art Foundation have filed suit to stop the foundation from selling artworks in Dia’s collection. Heiner Friedrich and Fariha Friedrich (formerly Philippa de Menil), who formed Dia in 1974, filed suit in New York state court last Thursday, seeking an injunction against the foundation and Sotheby’s, which is planning to auction Dia works by Cy Twombly, John Chamberlain and Barnett Newman. The 27 works of art worth are expected to raise as much as $20 million at the auction on Wednesday.

An article in Art in America gives a condensed version of the arguments:
The Friedrichs: To remove them “from public access and viewing in direct contravention of Dia’s entire intent and purpose.”
Dia director Philippe Vergne: “Dia cannot be a mausoleum.”
Former Menil Director Paul Winkler (and brother of the other Dia co-founder Helen Winkler Fosdick) in a letter to Vergne: “To sell art works at the core of the ideas and collections of Dia is an outrage and to do so for the purpose of acquiring works by other artists is counter to the unique vision and spirit of Dia.”

I believe that, as of today (11/12) they’re withdrawn the suit saying that, although they are extremely unhappy with trustees’ actions, they don’t want to further harm Dia.