Well-known street muralist Daniel Anguilu has branded Houston with his colorful, energetic pieces for years, but can they be re-packaged into gallery art? Kaleidoscope, his first-ever gallery exhibition, at Peveto in Houston, shows that no, of course they can’t.

It would be easy to dismiss the show as a simple sellout, except that for Anguilu, used to making permanent outdoor murals, an easel painting is equivalent to a T-shirt: another portable surface to be decorated and sold. It’s the opposite of selling out: Anguilu is picky and principled about his mural commissions. He turns down many lucrative jobs because the “energy isn’t right,” and he’s hoping that money from gallery art sales can help keep his street work, his “real” work, free from commercial pressures. 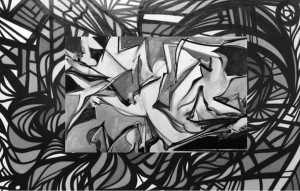 Compare Anguilu’s show with Michael Kennaugh‘s show down the street at Moody Gallery: both painters shatter their pictures with gestural swoops and slashes. Similar in size, their paintings are sold in similar galleries on the same street in the same city, for similar prices. But Anguilu and Kennuagh have fundamentally different relationships to the mystique of easel painting.

Kennaugh evokes that mystique with skill and conviction. For many viewers, it’s exactly what they’re looking for in an art experience. Kennuaugh indulges that mythology with an unselfconscious dedication that provokes sighs of exasperation from sophisticates who want something new, and sighs of satisfaction from regular folks just looking for good old-fashioned painting. Anguilu, with Peveto’s help, is exploiting that mystique to further other artistic priorities.

Daniel Anguilu is a Houston treasure, and Peveto deserves credit for trying to help him make some money out of his fame, but they could have done a better job. This is the artist’s first venture into making gallery art, and he’s not familiar with the conventions. Peveto facilitated the show by delivering ready-made plywood panels to Anguilu’s studio and retrieving them when they were done, and the first panels were very poorly made. Two paintings in Anguilu’s show were hung sideways: unsanded seams in the panels were so rough they threw shadows across the paintings when hung upright. Hanging the paintings sideways got rid of the shadows. Problem solved.

Was the idea that lumpy panels would seem less pretentious? Or were they simply cheaper than stretched canvases?  The impression is that the gallery didn’t think Anguilu’s paintings were worth the expense of industry-standard supports. Collectors love to look at the back of paintings seeking the hallmarks of professionalism.  A neat row of stainless staples or some intricate carpentry is an easy, unobtrusive way to give works the luxury-goods cachet that helps push them out the door.

They also could have edited. While you’ve got Anguilu busy painting panels, why stop with the pieces you need for the show? Have him paint extras, and choose the best ones, especially for his important first outing. Of the nine paintings at Peveto, the first six show Anguilu experimenting with his new format: 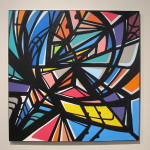 #1: In Teotleko—Time to Worship All Gods in Nahuatl, Anguilu reacts aggressively to the the square panel, cracking it like a pane of glass, and adding cobwebs. 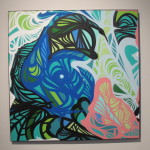 #2: In Untitled (Abstract Composition), he experiments with colored outlines made possible by the smaller size of the painting. For large outdoor works, he mostly outlines in black, and brings plenty of it along, so he won’t run out of paint. 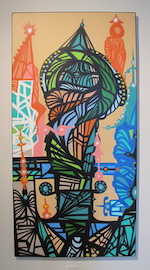 #3: Open Your Eyes and Look Within (Large Tower) is like a vertical section of a mural, with typical Anguilu towers set against a flat, empty background. 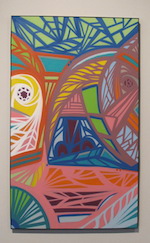 #5: Tlapalli—Pale Mask, Anguilu settles on the cropped-in “mask” face as an organizing motif, and tries not using black at all. 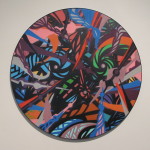 #6: Untitled (Mask withTowers) combines the mask motif with spiky towers, as if the face is caged or threatened. 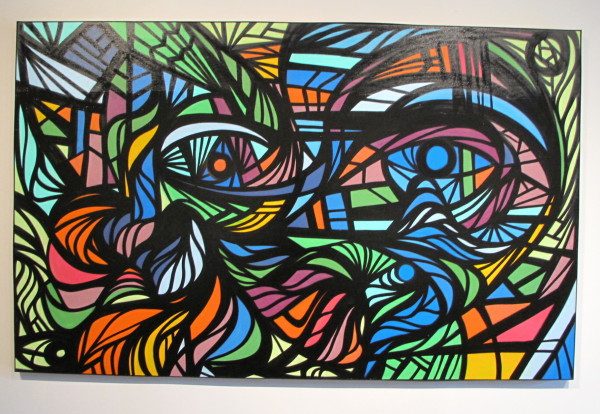 In the final three pieces, Untitled (Round Mask), Untitled (Large Mask) and Nom De Guerre—Marcos (Blue Mask), Anguilu reverts to his default graphic style and begins to hit his stride. Bold, close-cropped faces press against the confines of the rectangular panels like Technicolor apes in cages, alive with the will to escape. Trashing those first six experiments, and showing the next four or five would have given Anguilu’s show polish. Again, the gallery, or the artist, seems to be hurrying to put product on the walls.

As souvenirs of his street murals, these paintings are okay but, if this show was the only impression you had of Daniel Anguilu’s work, you might shrug and turn away. The danger is that gallery art, especially if it gets collected, is a lot more permanent than street art. Ten years from now, these paintings might be all that’s left. 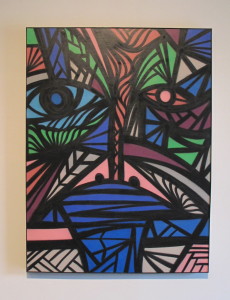 Daniel Anguilu: Kaleidoscope is on view at Peveto Gallery in Houston through December 7.

This show consists of paint on panel; color and line; gestural shapes and symbolic elements that the artist wants to convey and express.
So why would you allow yourself to get caught up in the minutia of what you think it is, and inject your own baggage into a show that is, for a lack of a better term, pure, in the context of making art.
It is what it is, and nothing more, or nothing less.

p.s. because when I’m done making a painting, the first thing I do is flip it on its face and admire my craftsmanship, perfectly spaced staples and impeccably alined D-rings.

Funny how Peveto’s resident artist and employee has to defend the show!!! Perhaps Peveto should work on finding “street” artists himself, rather than just picking off leftovers from FunkMotor 2013.

Why is that funny, Stan??? (I figured I’d match your three exclamation marks with my three question marks. Here at PEVETO, we only show what and who we like. Defending somebody’s work that I personally like hardly deems to be ridiculed, and I would hardly consider Daniel Anguilu “leftovers” from anything.

thank you for the review Bill,all points well taken.