The ultramarine did it for me.

Forty-five minutes into the carefully coordinated chromatic cycle of The Color Inside, James Turrell’s latest foray in global Skyspaces—rooms open to the sky via roof aperture—the sparkling-new walls in the curved chamber atop UT Austin’s Student Activity Center glowed blue. Visceral, ocular-obliterating, Yves Klein blue. Simultaneously, the oculus (Turrellese for “skylight”) gleamed silver, a tactile force that appeared to detach itself from the ceiling. I perceived that silver, surrounded by deafening sapphire, deep within my subconscious. In her review of the Guggenheim edition of Turrell’s tri-city retrospective this past summer, New York Times art critic Roberta Smith compared witnessing Turrell’s installation Aten Reign to that pivotal scene in Close Encounters of the Third Kind. Call it spiritual, call it sublime: The Color Inside‘s ultramarine-silver combo was my close encounter. 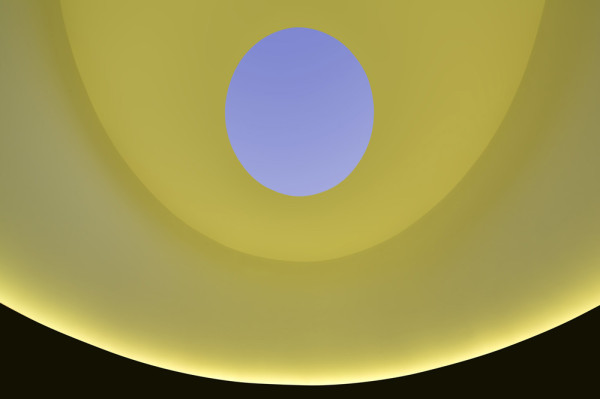 Confession time: I entered The Color Inside with an enormous stormcloud of jaded hesitation. This is a recurring problem, as Turrell’s perception-enhancing and/or -distorting light works swell in complexity and grandeur. Usually, my reserved thoughts dissolve into childlike amusement or mature bewilderment—like, how the hell did he do that? Or, I don’t want to know how he did it! But that initial skepticism is still there, an innate vexation that spectacle will eclipse the experience, warping an illuminating rendezvous into a stadium laser-light rock show.

It wasn’t always this way. My first brush with Turrell was within his first public Skyspace, the fittingly titled Meeting, a sublimely no-frills ’86 model installed into the schoolhouse roof of MoMA PS1 in Long Island City, Queens. Just a small wood-lined room with a quadrilateral of floating New York sky, plus discreet mood-lighting that never seemed to compete with the main event overhead. As a Big Apple transplant, I was taught early on that only tourists gawk at the sky (usually at skyscrapers and Times Square’s glowing billboards). In Meeting, I reveled in gawking and at how pure and infinite the sky appeared. After experiencing several Skyspaces, including Turrell’s newish pyramidal Twilight Epiphany at Rice University, my expectations (type of structure and chamber, size of aperture, light sequence) and reservations have grown. As in, I’ve seen this all before, right? 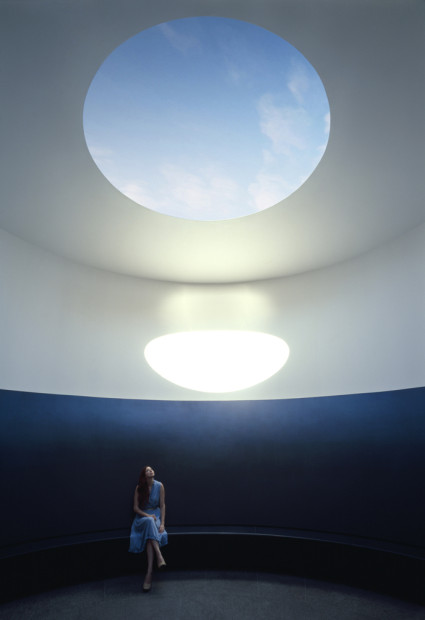 Interior of The Color Inside, 2013. Photo by Florian Holzherr

Landmarks, UT Austin’s public art program, commissioned The Color Inside in 2008, resonating from founding director Andrée Bober’s deep knowledge of Turrell’s oeuvre and interest in a site-specific Austin project, plus in the UT student body’s desire for a reflection room on campus. The Student Activity Center opened in 2011 and, three floors up at the rooftop garden, construction on Turrell’s Skyspace commenced. Bober noted that, for Turrell, the journey to an artwork is an integral part of the experience. For The Color Inside, this meant a lift from the ground floor, a carpeted corridor lined with seminar rooms, and, through a glass door, a wooden deck toward the curvilinear white plaster vessel. Tucked away upstairs and outdoors, it elicited in me a jolt of discovery akin to when I met Meeting some nine years prior.

Fast forward to my ultramarine encounter. This was preceded by a brief downpour, where slo-mo raindrops separated (à la The Matrix bullet-time style) from a royal blue sky, haloed by yellow light, and an impossible array of hues before that. I entered the Skyspace an hour before the sunset light show, to see if “just” natural light embodied the same surprise as viewing Meeting. It did: the elliptical aperture revealed blue sky and billowing clouds from one side; yet, when I crossed the chamber for a different vantage, I saw only a bright blue void. It was briefly disorienting, then refreshingly contemplative. Upon exiting the Skyspace at twilight, after the light sequence concluded, the night sky—in its limitless scope and mystery—unfurled in every direction. Was it wildly different from the Austin sky I’d observed fleetingly, distractedly over the past two years? Perhaps not…but still, it made me look. 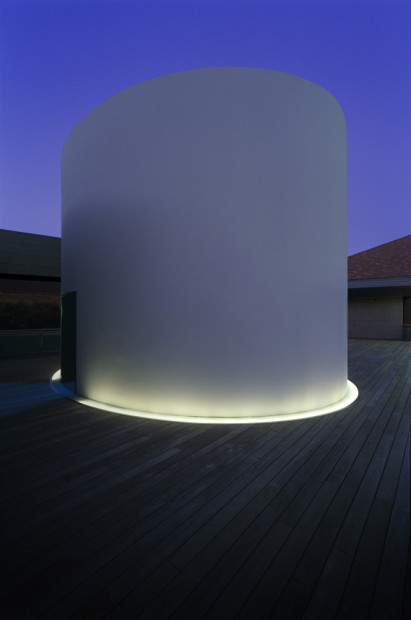 Exterior of The Color Inside, 2013. Photo by Florian Holzherr

A field guide to Turrell’s Texas Skyspaces
Wired‘s May 2013 article on Turrell (“Mad Genius Buys Volcano, Transforms It Into Naked-Eye Observatory”) counted some 82 Skyspaces worldwide. UT’s Turrell page notes 84 now, including 12 public spaces in the United States. That’s a lot of light. Use the following guide to source out public Skyspaces within Texas, including those temporarily closed or forever “destroyed”.

One Accord (2000) – conceived by Turrell with architect Leslie Elkins and installed in the Live Oak Friends Meeting House’s ceiling, in the Shady Acres neighborhood of central Houston. The work is currently in repair, and viewings are canceled until further notice.

Twilight Epiphany (2012) – Rice University received a resounding dose of sublimity in the summer of 2012, courtesy Turrell’s bi-level pyramid of grass, concrete, stone, and composite steel at the Suzanne Deal Booth Centennial Pavilion. Plus, this Skyspace is acoustically engineered for music performances. Special LED sequences occur at sunset and sunrise (reservations recommended), though the Skyspace itself is open from dawn to 10 p.m. daily except for Tuesdays.