But since the show, organized by CAMH Senior Curator Valerie Cassel Oliver, traveled to New York, the press has been ecstatic. Hyperallergic announced: “Once in a while those shows come along that seem so vital, you can’t believe they haven’t been done before. This is one of them.” They followed up a few weeks later with a much longer review. Even the Huffington Post featured a huge photo spread and article on its front page. And this is all before the whole show is open! (The New York presentation of Radical Presence is organized in two sections: part 1 opened in early September at NYU’s Grey Art Gallery; part 2 will open at The Studio Museum in Harlem on November 14.) 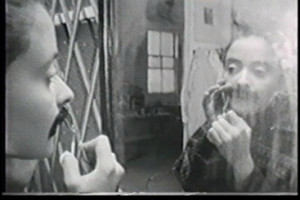 This past week, though, conceptual artist/performance artist/philosopher Adrian Piper decided she was not as enthusiastic about the premise of the show and asked that her work be removed from the exhibition. ARTnews reports that the monitor showing footage from Piper’s 1973 performance piece Mythic Being was turned off and replaced with a note to viewers, which included some correspondence between Piper and Cassel Oliver.

Piper stated: “I appreciate your intentions. Perhaps a more effective way to ‘celebrate [me], [my] work and [my] contributions to not only the art world at large, but also a generation of black artists working in performance,’ might be to curate multi-ethnic exhibitions that give American audiences the rare opportunity to measure directly the groundbreaking achievements of African American artists against those of their peers in ‘the art world at large.’”

The note responds with a statement of Cassel Oliver’s from the exhibition catalogue, arguing that the show’s mission is to resist “reductive conclusions about blackness,” adding, “It is clear however, that some experiences are hard to transcend and that stigmas about blackness remain not only in the public’s consciousness, but also in the consciousness of artists themselves. It is my sincere hope that exhibitions such as Radical Presence can one day prove a conceptual game-changer.”

Radical Presence is scheduled to travel to the Walker Art Center in Minneapolis next year.