Houstonia’s Five People You See at an Exhibition Opening: Who They Really Are 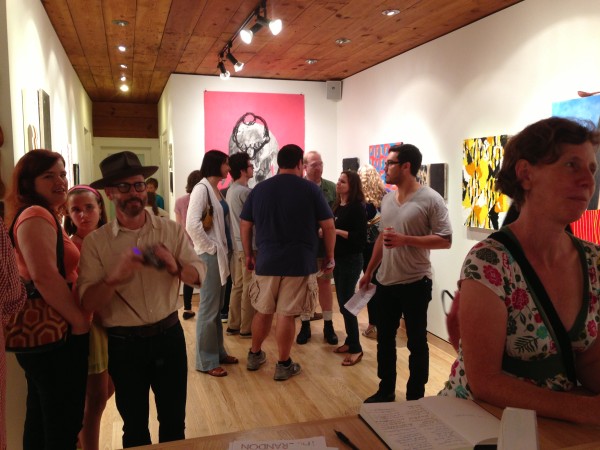 Last week, Houstonia Magazine’s Michael Hardy took a pot-shot at sterotyping “The Five People You See at an Exhibition Opening,” profiling “The Hipster,” “The Yuppy,” “The Alcoholic,” “The River Oaks Matron,” and “The Art Writer” in unflattering clichés. Glasstire actually goes to a lot of exhibition openings, and while there’s never a shortage of easy-to-ridicule characters on hand, Houstonia’s field guide has got it all wrong. Here’s who all those people Hardy saw really are:

Artists have plenty of time to attend exhibition openings since they are either collecting unemployment, working part-time at Half Price Books, or enrolled in a master’s program in an esoteric subject with no job prospects. There for the art, and the scene, artists can usually be found outside the gallery, where they can talk candidly, often in the company of other artists. They can be spotted by their less conventional clothingthe way they seem to know people, and their vintage glasses. Do not ask an artist what he thinks of the art, as you are likely to receive noncommittal, but vaguely positive platitudes,  unless he’s outside the gallery in the company of other artists. Although artists can be hip, hipsters have more money, and can be found spending it in microbreweries and boutiques, rather than in galleries.

Young collectors attend art openings in pairs, usually at the insistence of the female half, who believes that supporting cultural experiences adds meaning or beauty to the couple’s life. Collectors are vastly superior to all the other yuppies, although they are, superficially, indistinguishable. Other yuppies profess to “love downtown,” yet invariably live in the same cookie-cutter suburban McMansion and drive the same cookie-cutter SUV as all their friends, and would never think of purchasing original art. Young collectors , know enough not to wear office attire to an art opening, attempting a kind of urban camouflage, but can easily be picked out by their pressed jeans, polo shirts, and leather loafers (for men) and their Louis Vuitton handbags (for women). Though sometimes easy to ridicule for their anxious pretensions, they’re always greeted warmly by the artists and gallerists.

Art gallery alcoholics are a vanishing breed; they used to love exhibition openings because of the free beer and wine, back when galleries could afford to give it away in quantity. They would arrive early, linger by the bar, and were often among the last to leave the building. To cover up their obvious dipsomania, they would often spend their time peering closely at various paintings, and attractive young artists, as if sizing them up for their personal collection, and could become knowledgeable, if creepy, conoisseurs. Most alcoholics would at least make an effort to look respectable , strapping on a faded tie or sporting a threadbare jacket. Many alcoholics attended so many exhibitions that people began to assume they were art writers. Sometimes, these people were correct.

Found mostly at museum events, few exhibition-goers are more dependable than the River Oaks patron. With her husband either dead or at work, the patron has nothing to do with her time but patronize the arts. She knows everyone—the gallery owner, the curator, the artist, the art critic—and has even been known to purchase a major work of art from time to time, unlike the other people on this list. Her taste runs to YBAs and Latin American Modernists, although she would sooner be seen without makeup than speak ill of any art. The patron is eagerly courted by museum directors who hope she will give them money or artworks this fiscal year and by dealers who hope she will buy their artists’ works. She can usually be spotted arriving at the exhibition in her late-model Jaguar or Mercedes Benz.

Art writers usually show up to exhibition openings alone, occasionally clutching a camera. Like the alcoholics, they need to head straight for the bar to fortify themselves for the evening. Drink in hand, they scan the room for familiar faces, making a mental note to approach the artists whose work they recently praised, and give everyone else a wide berth, to avoid embarrassing suck-ups and time-wasting chit-chat. They take to examining the works, where no one is ever blocking their view, and quickly move on to the next opening. While engaged in art appreciation, the writer must not under any circumstances be disturbed, so he comes back on Wednesday afternoon to do his serious looking, when there’s no one around. Artists, collectors, and gallerists, instead of interacting unselfconsciously with the arts writer , either offer self-serving congratulations, or uneasy silence. Remember that the arts writer is underpaid to visit this gallery and to consider its so-called “art,” however banal.  Annoy one by reciting your artist’s spiel in response to a simple question, and you risk  having it quoted, online, for the public to ridicule. 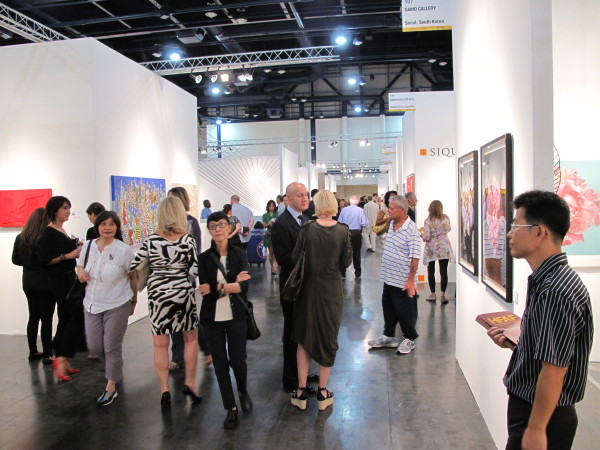 A gag that works well with all five categories: ask them if they have ever seen Salvador Dali’s painting of Custer’s Last Stand. Invariably, rather than admit ignorance, they will say they think they saw it in a book. To jog their memory, you describe the painting: it’s a huge fish with a halo floating in the air over a giant disembodied eye, and at the bottom are dozens of naked Native Americans on a grassy hillside, making love in every possible position. (Baffled look from artist or art fan) Kicker line: the painting is called “Holy Mackerel, Look At All Those F***ing Indians.” Red “gotcha” face guaranteed. I tried so hard to get Bert Long Jr. to do that painting, but he never did.

Before I get busted, I stole that joke from Nelson DeMille’s “Wildfire.”

there’s something scary in the uncanny truth to this article

I’m the artist but I don’t smoke anymore for more than 3 yrs! But used to, and I would be one to step outside and smoke. I also appreciate art and have supported my friends, that I can afford. Being an artist and loving art is one of God’s gifts to us!

Nice photos of Francesca and Mari!

Well, bully for both writers—literally. This is the usual sort of banal satire one increasingly expects from from many current journalists/social critics. It is very easy to be smug and nasty about any group of people who do any type of activity—be it art or sports, etc.

What it really is meant to do is show how witty the writer is when they in fact what they are discussing has little to contribute to the conversation. Yes yes, I get the gags and the insider jokes and they remind me of high school.

The harder thing for a writer to do is be considerate and compassionate enough to know that stereotypes are all simplistic mean-spirited ways of defining others and are ultimately demeaning. Real journalism is thoughtful and enlightening when chasing down an idea—even when involved with social critique. Consider such writers as Joan Didion or David Foster Wallace as humanistic social critics who dig deeply into a cultural moment and critique it—often sharply defining it’s flaws— without being simplistic, self-centered, or cliche.

Great stuff! I guess I fall into four of the five. It is fun to people watch at openings!

Looks like Houstonia has deleted all the negative comments on their piece, too. If you can’t stand the heat…

This is a fun exercise, perhaps done best by Pablo Helguera in reference to the Whitney Biennial. It’s just difficult to read with all the strike-throughs. This kind of internet shorthand (hashtags included) really cheapens otherwise good writing. I hate to be the writing police, but someone has to say these things. Without police the realm of blogs descends into barely readable anarchy!