El Paso filmmaker César Alejandro has announced that he will be producing a documentary about the career and legacy of sculptor Luis Jiménez. 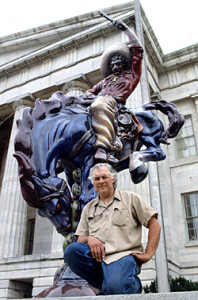 The El Paso Times reports that it was Alejandro’s wife, Laura Rojo de Zamora, who had the idea for a series of documentaries highlighting successful El Pasoans, beginning with Jiménez. The couple owns Alexandria Films and help to organize the annual Binational Independent Film Festival. Alejandro also stated that a community group called United El Pasoans for El Paso will raise money for the series of PBS-style documentaries.

Jiménez, whose large fiberglass sculptures portraying Southwestern and Hispanic themes were sometimes controversial but always recognizable, was born in El Paso in 1940. He attended the University of Texas at Austin and El Paso and later taught at the University of Arizona and the University of Houston. He was killed in his New Mexico studio in 2006 when a large section of one of his sculptures fell on him and severed an artery in his leg.

“We want to celebrate Luis and his art but at the same time we want to start this movement,” Alejandro said. “Let’s forget all our divisions and see El Paso as a community working together in unison and be able to do something together in celebrating ourselves.”

Rage, Paranoia, and Madness in Denver