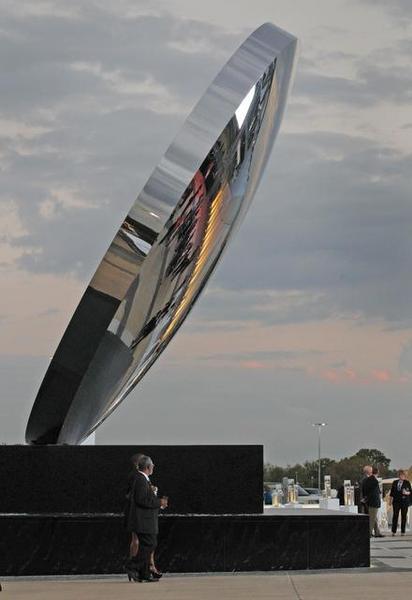 This weekend, the Dallas Cowboys have added the first outdoor sculpture to its art collection at AT&T Stadium, which now includes 56 works of art, including 13 commissioned pieces. The new work is Anish Kapoor’s Sky Mirror, a 35-foot-diameter concave mirror made of polished stainless steel. It stands nearly three stories tall in the center of the stadium’s east plaza. The 23-ton sculpture shows a reflection of the Texas sky on one side and a mirrored look at viewers on the other.

Sky Mirror was not specially commissioned for the stadium, but Kapoor’s name was on the original wish list for the collection, reports the Fort Worth Star-Telegram. “To get something custom made might have taken more years than I wanted to wait,” said Gene Jones, wife of Cowboys owner Jerry Jones. The sculpture has been around the world before settling into its new permanent home. “The work has been around since 2005,” said Kapoor, who attended Friday night’s unveiling. “It’s very difficult to place.”

The Museum of Contemporary Art in Sydney, Australia, also wanted to purchase the $10 million sculpture, where it was recently shown in a retrospective of Kapoor’s work, but the artist chose the Arlington location. “It’s in an unexpected place—a stadium. I like the idea of it being in front of big audience, maybe not a worldwide one since it’s a football stadium, but an American audience.”

I think this piece was originally installed at Rockefeller Center, where it was pretty tight in that space and reportedly somewhat blinding to the neighbors across 5th Avenue. It will be interesting to see it in the wide open spaces of the North TX plains (if I may romanticize Cowboys Stadium).