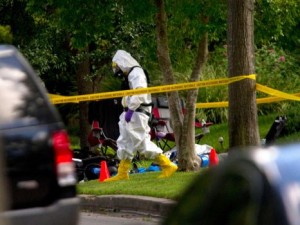 Various departments of the FBI (including the Hazardous Materials Response Team), the Houston Police Department, and the Houston Fire Department entered two homes today with a warrant search. One house is on the 2000 block of Albans in the Southampton neighborhood; the other is in the Memorial neighborhood. The Bryan Police is also currently assisting the FBI with an investigation in a condominium complex. All three properties are owned by Cecily E. Horton, and her husband, Andrew Schneck, well-known in the Houston arts community.

Horton’s business partner at M.K.G. Art Management, Melissa Grobmeyer, spoke to the Houston Chronicle to only to confirm the raids. “I’m not going into it,” she said. “It has to do with her son.” While the FBI would give no details on the purpose of the search, the latest Chronicle post reports that it was prompted by someone ordering chemicals that could be used in the manufacture of some sort of gas, although not used in any traditional explosive.