andX and Brand 10 have been two of the most progressive nonprofit art galleries in Fort Worth over the past few years. Unfortunately, Brand 10 will be closing in December and the joint operation will be condensed into only the andX space. The final exhibition, Moving Pictures, is an excellent survey of video works, installations and filmed performances from some of the artists that both spaces have exhibited over the past few years, but this show is much more than a greatest hits montage.

The works of Liz Rodda, Rebecca Carter and Matthew Cusick are installed together in the central room of Brand 10. All three video works use appropriated film in a variety of ways, such as Rodda using clips from YouTube videos. 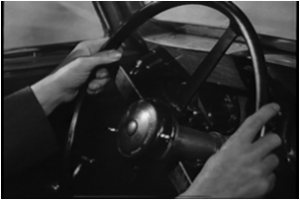 Cusick’s work OK, NOT OK takes a very small clip from Hitchcock’s famous 1941 film Suspicion of a man with his hands on a steering wheel. Cusick slows down the original two-second clip, expanding it into 1:57 minutes of uncertainty, indecision and loss of control, displayed on an older midsized television.

In her work, No Place Like Home, Carter appropriates the famous The Wizard of Oz segment in which Dorothy is clicking her red shoes and puts it into a clean and continuous loop. In doing this, she captures the longing to go home in a constant and fruitless repetition on a portable DVD player screen.

In the back room of Brand 10, seven video works by Liz Hickok are looped on one projector. All of her works feature model buildings made of Jell-O, some of which are more of a record of a particular installation, while others have a narrative element, such as Godzilla Eats Scottsdale. 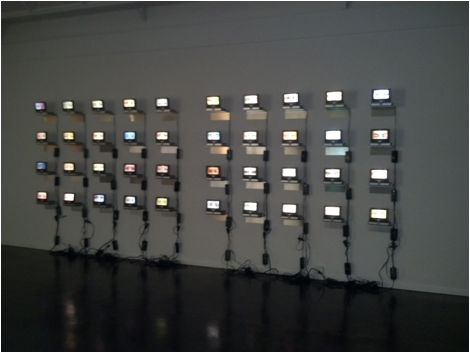 Frances Bagley’s piece Close Watch is a confrontational installation of 40 portable DVD players on shelves, displaying a continuous loop of different sets of eyes staring at the viewer. They are all in even rows along the wall with a slightly larger gap in the middle, marking the half male and half female division. The eyes have a familiar quality but at the same time are universal signifiers. The person or the group, how they work together or separately, is an interesting inquiry of the work. The sets of eyes, trapped in portable DVD players on the wall in neat rows, accentuate the differences yet pose the question of whether a person’s individual ego or a greater collective ego is more important.

In the other half of the show, andX was set up with a few televisions mounted on the walls and the large central space, which had chairs and a projector playing video works from several of the artists on a continuous loop. 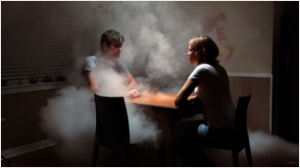 Three works from Hillerbrand+Magsamen dealing with normal domestic situations are transformed into intense, dramatic events with fog and low rumbling music and shown on the main projector. The larger format adds to these already powerful works.

Nina Schwanse’s work Swamp Realness: Born on the Bayou could be described as a bad YouTube parody of the TV show Swamp People, complete with the artist dancing on the top of a car at the end of the work to the song “Get Naked (I Got A Plan)” by Britney Spears. The piece is incredibly confrontational and her use of tension, humor and the commentary on reality television makes it very successful. 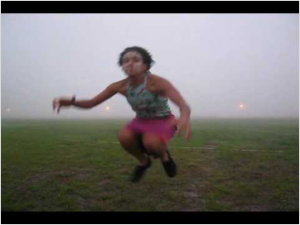 Wura-Natasha Ogunji, The epic crossings of an Ife head
2009 (still)

Tucked away in the back corner of andX was a personal favorite, Wura-Natasha Ogunji‘s Epic Crossings of an Ife Head. A single figure repeatedly jumps across a field, yet it is trapped in mid jump; its feet never hit the ground except when it jumps right in front, off camera. The audio is a mixture of strange electronic clicking, beeping sounds and what seems like raspy gasps into a microphone. The work, as a whole, is beautiful study of the body in motion and digital manipulation.

Any show that features video works by twelve different artists is an ambitious undertaking in and of itself. Here is a short video of the Brand 10 installation, complete with overlapping soundtracks and disorienting darkness. You are there:

Moving Pictures is on display at both locations through October 26th.

Many thanks to Glasstire and Matt Szal for his wonderful writing about our show which will be up through October 26th. We hope everyone will visit both spaces. Thank you also to Glasstire for naming Moving Pictures one of the top 5 shows. Our mission has been to show artist’s work not traditionally shown in galleries. At the end of this show we will be only at the and x space. at that time we excited to open a show of HOMECOMING ! At the and x space. Please watch for our notice in Glasstire or join us on Facebook and at our website brand10artspace.com Kathy Webster, Heagan Bayles, Matt Clark and Christine Bisetto

brand 10 andX have lit up the Fort Worth art scene.
Kudos to all!