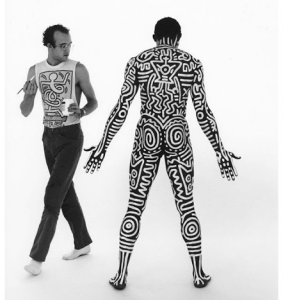 Is collaboration equal? Should everyone have the same idea coming into it? Is there a leader? Is it important that someone is a leader? These were some of the questions posed by legendary choreographer Bill T. Jones. Presented on Thursday, September 12, the Cynthia Woods Mitchell Center for the Arts’ inaugural public program that will annually feature a major figure in the world of artistic collaboration, featured Jones as its first guest lecturer. Jones has engaged in a host of artistic partnerships, including collaborations with visual artists such as Louise Nevelson, Kiki Smith, and Keith Haring.

Aptly, the night began with a collaborative introduction. UH Mitchell Center artist-in-resident, composer and violinist Daniel Bernard Roumain, began the introductions by performing Jones’ written words while stroking and bouncing his bow off of the strings of his violin in a commanding mix of classical and contemporary techniques.

Following Roumain’s performance, a large projection of another performance began to play on stage. This performance featured a man in a dark suit standing side-by-side with an older woman who was wearing a brightly colored, yet modest church dress. She began to assertively give her benediction to the audience. She stood strong, never moving, only delivering. As her words grew louder and more forceful, as she was overcome by her testimony, the man beside her matched the strength of her words through the movement of his body. He started slow, as did she, but his movements soon became larger and quicker. His dance seemed controlled, yet instinctive and spontaneous. He was the embodiment of her words. 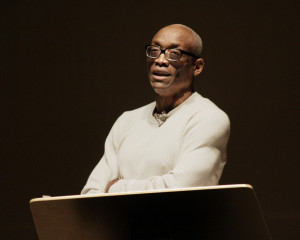 The man in this video was a young Bill T. Jones; the woman, his mother. When the video ended, the stage of the Moores Opera Center lit up along with the crowd as Jones emerged from stage left. After briefing the crowd on all the various definitions of “collaboration,” he began speaking about his mother’s benedictions, her testimony, as the first performance he ever witnessed. Specifically, he reminisced about Christmas morning as a child. Born in 1952, the son of migrant workers, Jones lived in a converted tractor barn with eleven other siblings. On Christmas, his mother would cook all night and then wake the kids up at dawn for Christmas prayers. She would call on the Lord and talk to her God, mixing performance and religion. And “at 200+ pounds,” Jones declared, “washed in sweat, exhausted, she would fall back: ‘ya’ll go open the gifts now.’”

He was inspired by the authenticity of his mother’s performance: “I wanted to be able to move people and be moved,” stated Jones. “There’s something about the professional art world—that maybe what it takes to be a quote ‘educated person,’ a certain distance from the world, a certain resentment of the world—that I could no longer feel that vibration. The avant garde dance world had no room for testifying.”

Jones advised the audience on finding an authentic voice. “Go where you’re scared to go…collaboration, cooperation—at the most profound level, seemed like testifying; very risky and very dangerous, but so important.” Jones remitted a previous optimistic statement in which he said collaboration was good for everybody involved and changes everybody involved. He felt compelled to add: “There’s selfishness in art making, and collaboration is actually a way of everybody going past themselves and finding something new.” Although he admitted to his own control issues when collaboration is not going his way, he stressed that collaboration can be vital to the middle ages of the artistic life cycle, when “You think you’ve seen it all. Why make another work? What can be new?” Artists can find new life by throwing themselves “into someone else’s fire, and thrashing it out.”

After the short talk, which took less time than its introductions, Jones opened the floor to questions from the audience. Microphones were erected at the end of each aisle and people quickly lined up to dialogue with him. Many of the questions were a parade of common collaboration pitfalls ranging from, “I can’t find people” to “I can’t work with these people.” The first question addressed the role of failure, to which Jones quoted Bob Dylan: “She knows there’s no success like failure, and that failure’s no success at all.” When asked, “What makes you overwhelmed in collaboration?,” Jones immediately replied with honesty: “Fear and a need for control.” 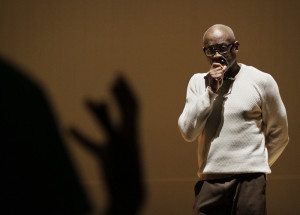 In contrast to the other audience members who asked questions that night, one young man, who had the audience in hysterical laughter after admitting he only stuck around for the free wine, decided to tell his father’s life story as if it were open mic psych night. He then, unexpectedly, stunned the audience by his repeated declaration that “eighty percent of the world is blind fucking sheep.” Jones wittingly replied, “Well, what are you doing… Are you an artist? Are you an organizer? What are you doing for this world that’s blind fucking sheep?” The young man replied, “I have no power to change it,” and Jones quickly rebutted, “Oooh, I have no power? Look at this; you’ve got this whole room listening to you, man.”

Jones generously and effortlessly reversed the unexpected and uncomfortable situation, choreographing his partner into a conversation about empowerment. (Later in the evening, there was another collaboration of a discreet police escort for the same young man.)

In the end, the large amount of time devoted to audience questions created a give-and-take between Jones and the audience that was, indeed, collaborative. Bill T. Jones’ lecture was a great start to Cynthia Woods Mitchell Center for the Arts’ new annual public program. There’s no word yet on the 2014 speaker—maybe we should open it up to suggestions from the audience.

Suzan-Lori Parks Will Come to Houston for the...