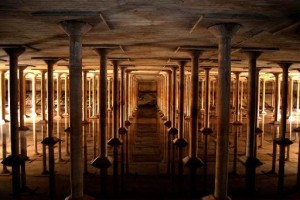 While the Buffalo Bayou Partnership (BBP) is busy transforming the 160-acre Buffalo Bayou Park (from Shepherd to Sabine), it is also beginning to think about what to do with the recently discovered “Cistern,” the city’s first underground drinking water reservoir, built in 1927 and closed up and forgotten a few decades later.

The folks at Houston-based SmartGeoMetrics (SGM) were so excited about the discovery that they donated their 3D imaging services to document the 87,500 square-foot underground expanse. First, there were a few pictures of the awesome space quietly floating around, then there were articles in Glasstire and the Houston Chronicle and, finally, BBP and SGM gave a presentation at the Architecture Center Houston last month. They were so overwhelmed by the level of interest in the cistern, that they have now released SGM’s incredible data files.

While BBP is looking into possible uses for the cistern, there is actually no official call for entries. And, since they were initially unaware of the cistern’s awesomeness, it was not included in the plans or budget of the current park renovation project. But, by the release of all this cistern data, we can assume that they are hoping for some big ideas and some big money. The SGM website states that, for historic reference, the cistern is now “being referred to as ‘The Water Works,’ a name that may change if a donor steps forward to fund improvements to this area of the park or the cistern’s interior.”

Along with that enthusiastic hint, SGM provides their cool 3D fly-through of the space:

The Buffalo Bayou Partnership Wants to Take You...