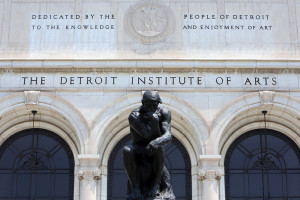 The American Association of Museum Curators (AAMC) has announced that it is moving this spring’s national conference from Houston to Detroit in a show of support for the Detroit Institute of Arts (DIA). Since the city of Detroit filed for bankruptcy two months ago, there has been much speculation, outrage, rumors, and opinions about the fate of the DIA and its collection.

“We have watched the situation in Detroit and at the DIA very closely this year,” says Emily Ballew Neff, President of the AAMC. “We believe that moving our conference to the DIA affirms our support of one of the most outstanding museum collections in the world.  And, we thought, what better way to show this than by bringing hundreds of curators to its doors next May?”

Neff is curator of American Paintings and Sculpture at Museum of Fine Arts, Houston (MFAH). Past AAMC presidents have included George T.M. Shackelford (2006-2009), Kimbell Art Museum Deputy Director, and Gary Tinterow (2001-2003), MFAH Director. The AAMC conference is scheduled to return to Houston in 2015.