The Sweetest Taboo takes its name, in part, from the popular song by Sade, in which the singer’s orgasm is liberated from some place in her understanding that treated it as an outlaw experience. Structured into music, expressions about the singer’s taboo acquire a sense of etiquette. Her sexuality is described in an approved form, thus her climax comes out of the shadows of unmentionable behavior. It is this sort of mechanism Erin and Elissa Stafford, curators at Dallas’ Red Arrow Contemporary, considered when putting together this exhibition. They wondered how a sense of etiquette evolves—or sometimes stalls—as images that were once considered perversions go up in galleries and other public places. The attitudes in Victorian-era art make for lively contrasts and comparisons. 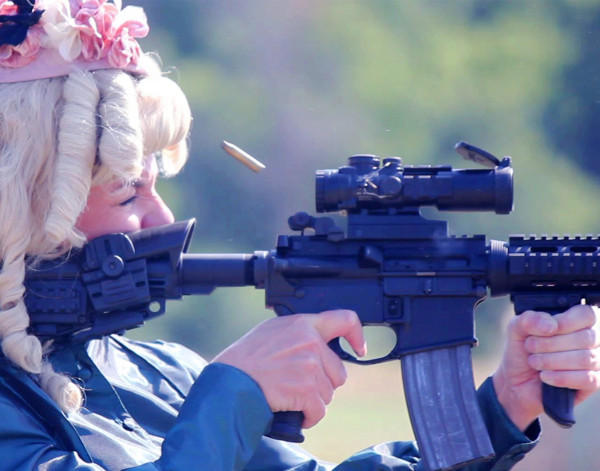 In a series of short videos, Colette Copeland creates a funny and interesting character called the Victorian Woman. We watch her at archery, firing pump-action and semi-automatic weapons, riding a mechanical bull, and executing wrestling take-downs against a male competitor. 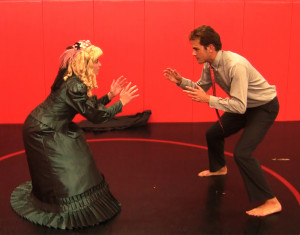 The Victorian Woman takes some hard falls during her wrestling and bull riding engagements. Copeland understands the slapstick quality of these falls, but also how jarring it is to see a woman hit the ground repeatedly, with such force.

In the wrestling video, Victorian Woman and her opponent, who is named Man, grapple according to Olympic rules. Ultimately, she scores more takedowns and is declared the winner. But she is quickly reduced to shame and frustration when Man snatches her blond wig and tucks it into his belt like a scalp. The message seems clear: when the sport is deregulated and Man (or man) is no longer subjected to the rules of proper conduct he will use brute force and humiliation as means to come out on top. 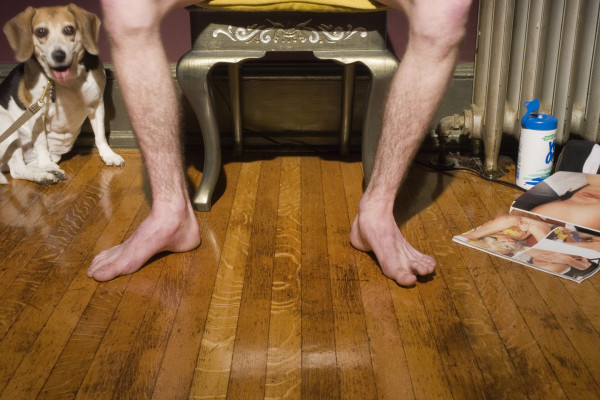 The artists of the 19th century were fairly mute on sex. But they did find ways to consider taboos within the careful framework of etiquette. I am thinking specifically about Bella Wilfer’s overtly flirtatious behavior with her father in the novel Our Mutual Friend, at one point waggling her bare white foot at him. Dickens located taboo in the bare foot and so does Gabriel Martinez in his series of chromogenic prints titled Self Portraits by Heterosexual Men/2007. Martinez lent his subjects a camera and instructed them to aim the lens at their feet and take a picture via remote control just at the moment they climax at masturbation. Showing the feet and not the friction is a way of framing the etiquette for this type of discourse. At the same time, the feet are highly expressive. The condition of each floor and the materials scattered there says a lot about the spaces men consider hospitable for self-pleasure. The dog in the picture above makes a very funny witness. It is a vivid reaction to master’s change in pitch. 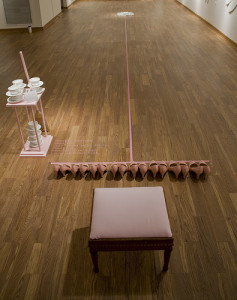 Libby Rowe explores historical, but not so distant, traditions of female etiquette in an installation called Learning Feminine: Posture. This installation is also a game: your objective is to make it to the finish line wearing pink pumps (rather steep ones) with a teacup balanced on your head. A pile of broken teacups stands as a comical monument to a lack of “proper bearing.” Biological Clock, another Rowe piece, features a woman’s pubis in a round clock face. Scarcely readable hands, not the clock hands but other ones, descend like a sort of deus ex machina to retrieve something from the mortal folds. Biological Clock is a sight gag that means to undercut the notion of time as the single pertinent image in fertility and beauty. The additional hands suggest an intervention is necessary to upset the idea that a woman’s youth is her only time of bounty. 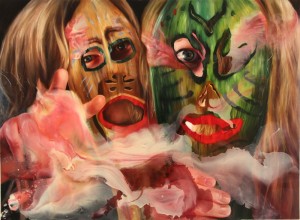 Hair is a well-known sexual symbol that the painter Angela Fraleigh treats with epic scope. they would tell each other you can live with this recalls for me another scene from the novel Our Mutual Friend, in which Lizzie and Jenny allow their long flowing hair to mix and flow over each other. The scene of women in personal conversation and intimate luxuriating in one another’s hair is made into a strange new myth by Fraleigh, who mixes hair into really quite voluptuous masks. The masks are fascinatingly expressive but there is also something sinister in the way they seem to imprison the faces. 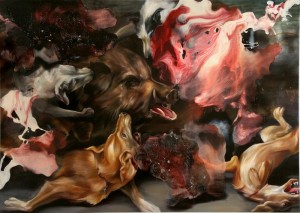 these fragments i have stowed against my ruins is a near quotation from The Waste Land. Eliot has it, “These fragments I have shored against my ruins.” The scene in the painting does not match any scene in the poem, but Fraleigh is probably thinking Eliot thoughts: the individual mind is a sort of mythic space, a place of complicated romantic vision, a battlefield, and a place of utter isolation. Here, the wild pig has been isolated by the dogs. Dark and golden hair mix furiously. And there is this fascinating tissue flying around. I read it as placental fluid and slumps of offal—a way to describe renewal and decay. As Eliot puts it in a different poem, “In my beginning is my end”.

The combat in these fragments is much more intense than the combat between the Victorian Woman and the Man in Copeland’s video. But there is probably a rhyme between the two encounters—a reminder that understanding between the genders is in some ways very new; terrible battles have been waged.

In a statement about the exhibition that appears on Red Arrow’s Facebook page, the curators put:

“Gender formation after birth is constantly in flux, resulting in a complex and ambiguous process that begins when we ‘come out to ourselves’. For this exhibition, four artists have chosen to linger in the grey area, a place where social, political and physiological factors have become heightened and the physical nature of gender has become disrupted.”

Because this gray area does not include person-to-person sexual contact, whether heterosexual, homosexual, or bisexual, the phrase “come out to ourselves” seems to describe an ascetic experience. I don’t suggest explicit sexual evidence is required, but it would be nice to see something that taps into the moods of mystery and fulfillment channeled in the Sade song. As it stands, The Sweetest Taboo exhibit is only a start of a conversation about contemporary framing of sexual and gender etiquette. But it is an intelligent and highly creative start. I encourage people to go see it. And don’t pass up Rowe’s participatory installation. (Alas, no pumps in my size.)

Thanks for reviewing this show. Interesting, But I have to say that your reading of the Sade song seems over-simplistic. I don’t think the song referenced in the show’s title is merely about an orgasm, nor is its focus simply on pleasure being forbidden. Rather, I think its more an exaltation of the sweetness of intimate love, sex, mystery, surrender, and addiction in secrecy. The storm of private thoughts, emotions, sensations; the feeling of simultaneous connection and isolation; and the question of how much to communicate and how much to keep to one’s self. “If I tell you now…?” This seems more in line with the spirit of the gallery’s statements about inner flux, etiquette, and self realization, and may have been a better approach to the show than looking for the climax. (Or maybe I just like this particular bit of 80s pop poetry a little too much, and think of it as completely different than Donna Summer’s orgasmic “Love To Love You Baby.”)