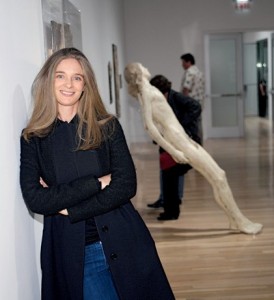 Menil Director Josef Helfenstein has announced the appointment of Allegra Pesenti as chief curator of the Menil Drawing Institute. She will head the development of the first freestanding facility in the United States created especially for the exhibition, study, storage, and conservation of modern and contemporary drawings. The Drawing Institute is a focal point of the long-range plan for the Menil campus and, after the announcements of the project architects earlier this summer, the appointment of chief curator moves it closer to realization.

A native of Milan, Pesenti did her undergraduate studies at the École du Louvre and University College London and received her M.A. and Ph.D. degrees from the Courtauld Institute of Art. She began as an intern in the prints and drawings departments of the Metropolitan Museum of Art, the British Museum, and the Louvre before joining the drawings department of the J. Paul Getty Museum in 1999 as an assistant curator. At the Hammer Museum, where she oversaw the Grunwald Center’s collection of prints, drawings, photographs, and artists’ books, Pesenti recently curated the exhibition Zarina: Paper Like Skin, which traveled to the Guggenheim in New York and is currently on view at the Art Institute of Chicago.

“In Allegra Pesenti, we have a Chief Curator with the ideal combination of scholarship, imagination, taste, and energy to bring this important project to fruition,” stated Helfenstein. “I am delighted to welcome her to the Menil.” Pesenti will join the Menil in her new position in January.