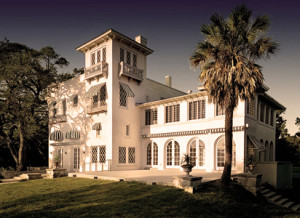 When The Austin Contemporary changed its name in July, it also said that it planned to refocus its mission and begin a seriously exciting series of art commissions. The Dallas-based Edward and Betty Marcus Foundation is helping The Contemporary to come through on that boast with a gift of $9 million.

In early 2013, the Foundation trustees initiated a selective competition for its $9 million corpus to be granted to “the Texas institution that proposes the most innovative, visionary visual arts initiative for the future.” According to the Foundation, Austin Contemporary Director Louis Grachos and his crew did just that.

Approximately $5 million of the grant will fund the commissioning and acquisition of sculpture and site-specific permanent installations by leading contemporary artists, to be shown outdoors at the 12-acre lakeside estate of Laguna Gloria, which will be named the Betty and Edward Marcus Sculpture Park. Another $2 million will be dedicated to an endowment for the permanent maintenance and conservation of the works in the Sculpture Park, and $2 million will fund a series of commissions, exhibitions and public engagements for The Contemporary’s ongoing program at the Sculpture Park.

In September, The Contemporary will inaugurate its program of commissions and exhibitions by presenting new works by Liam Gillick and Marianne Vitale. Installed in both the downtown Jones Center and the Laguna Gloria grounds, the works will be on view from September 21 (a month before the Nasher XChange exhibition opens, just in case anyone wants to start a Dallas/Austin sculpture rivalry) through January 5. Other artists who will be commissioned by The Contemporary in 2014-15 include Charles Long, Orly Genger, Tom Friedman, Tom Sachs, Ayse Erkmen and Jim Hodges.

This is great news for artists the capital and texas as a whole, bravo!
Don Redman